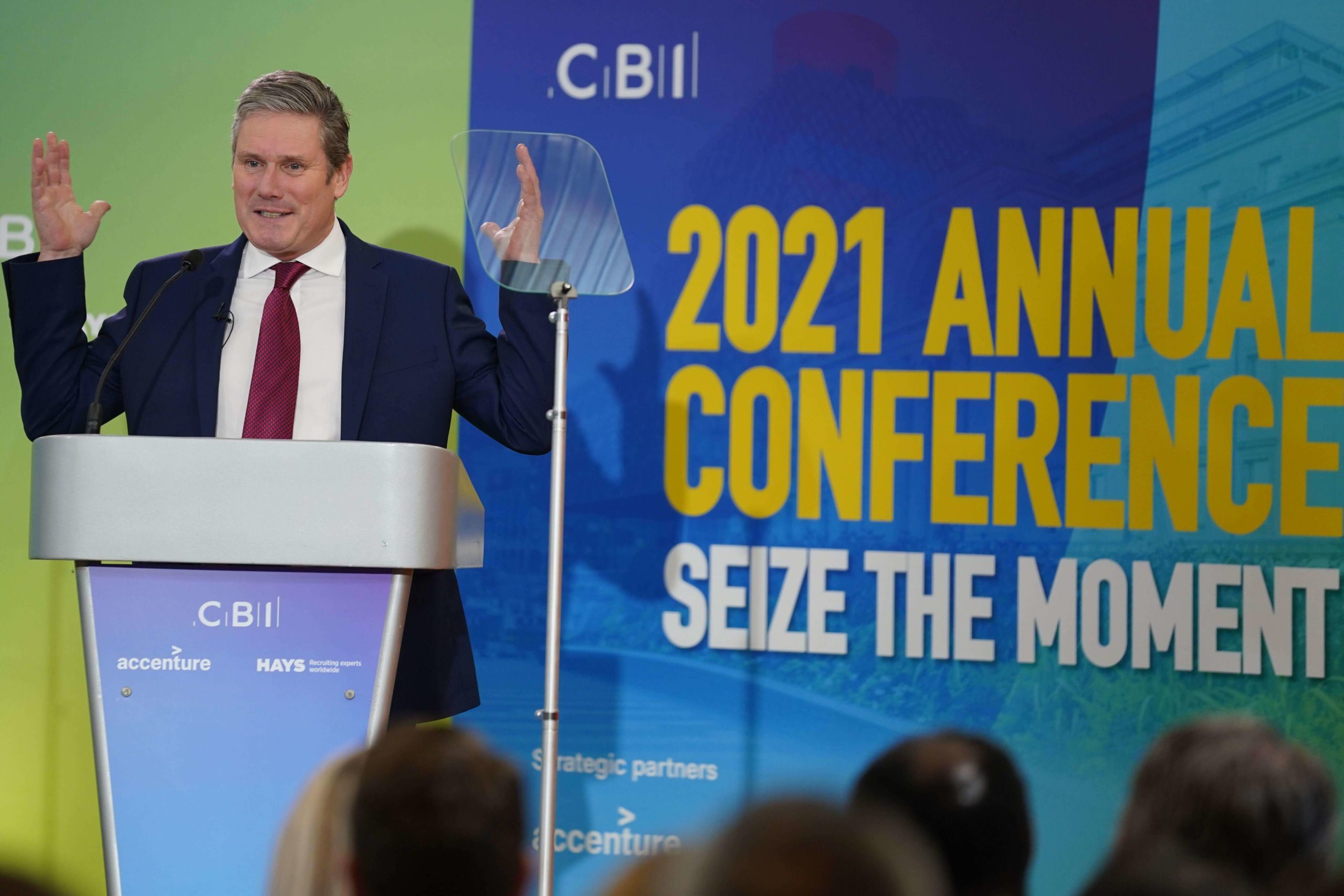 In his address to the Confederation of British Industry’s (CBI) annual conference today, Sir Keir Starmer has said that Labour is “open to business”.

He said that Labour is both the party of work and the party of business, and that British Industry must be able to compete in an “ever-competitive world”.

Sir Keir said he would work with the private sector to “put right” Britain’s failure to be as “dynamic” as possible, referring to the partial role of Harold Wilson’s government in establishing the CBI.

He also argued that his vision was of a “future radical Labour government that will not provoke division”.

In a clear pushback at the prime minister’s allusion to pandemic supply issues as the key reason behind ongoing economic issues, Sir Keir highlighted that “even before the pandemic”, the Conservatives were not tackling the UK’s productivity.

“Of course, the Government has its own answer to the productivity problem,” he says, jibing that “He’s called Geoffrey Cox.”

He described the government’s decision to scrap the eastern leg of HS2 as aa”betrayal of the North” and of “economic regions”.

He said a “national reset” is needed in the wake of Covid-19 and Brexit, and that collaboration between industry and the government was vital to remake Britain’s economy so that it is fit for the future”.

“We really don’t think the solution to every problem is just to throw cash at it,” he complained, lauding his shadow chancellor Rachel Reeves’ “brilliant” work in the wake of the “missed opportunity” of the government’s October budget.

He said the government’s lack of “industrial strategy” and “no business plan” was behind the “missed opportunity”.
He echoed a line from his party conference speech, saying that: “We all have a duty to make Brexit work.”

He summarised several policies that he argued would “fill the holes” in the current government’s post-Brexit strategy in order to ensure British firms maintain their competitiveness while maintaining “our interests”.

He explained: “Labour would also look to find an agreement on mutual recognition of conformity assessments across all sectors. That would mean our producers would no longer have to complete two sets of tests. There would be no need for two certification processes to sell goods in both the UK and the EU.

“We would seek regulatory equivalence for financial services, and mutual recognition of professional qualifications, because we absolutely recognise the importance of looking after our world-class financial and professional service businesses.

“We would seek to maintain Britain’s data adequacy status, making our data protection rules equivalent to those in the EU, to secure UK digital services companies’ competitiveness.

“We’d also seek a better long-term deal for UK hauliers to ease the supply chain problems we are seeing.”

He accused Boris Johnson of being more interested in “pantomime disputes” than leadership.

He then went on to explain that Labour would be launching a “Council of Skills Advisors” to rethink education policy, explaining that it would: “recommend the change we need to ensure everyone leaves education job ready and life ready, … explore how to ensure that young people are literate in the technology of the day” and “raise the sights of all pupils” giving every young person new ambitions and the belief they will achieve them.

The announcement comes as Labour analysis reveals that children in Kensington and Chelsea are almost twice as likely as children in Hull to achieve essential level 3 qualifications (A-level or BTEC equivalent), with the Party warning that the Conservatives’ failure to deliver the skills and qualifications young people in every region need makes a mockery of the promise to spread opportunity.

Former education secretary Lord David Blunkett, who will serve as an advisor on the new council, said:

“I am very pleased to be able to continue contributing to the critical debate about how we modernise and reform the lifelong learning journey from schools through to progression in work.

“Nothing can be more important than spreading what works, embedding high-quality and inspirational teaching and learning, and adapting a curriculum that provides motivation to young people at every stage, and reassurance to employers that they will have literate, numerate, creative and responsive employees for the future.”