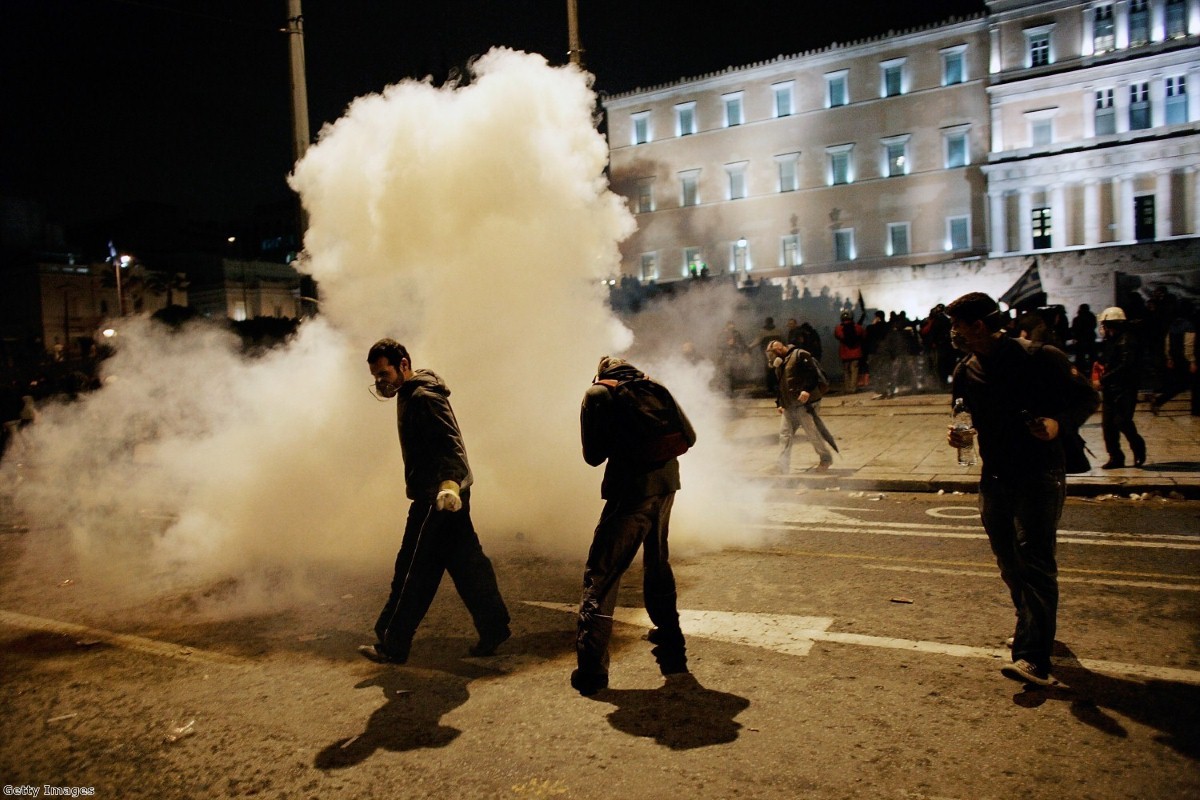 Britain has reacted warily to a bailout deal which opponents say will force austerity on Greece for years to come.

The deal, agreed after an all-night negotiating session, will see Greece receive loans of 130 billion euros (£110 billion) in return for a reduction in its debt to 120.5% of GDP in eight year's times.

The country must also accept an "enhanced and permanent" presence of EU monitors to oversee economic management.

George Osborne, who was in Brussels for the talks, said he welcomed the deal, which aimed to put Greek debt on a sustainable level.

"That's been the crucial missing ingredient. They have not, in the past, come up with a sustainable position for Greece," the chancellor said.

"I think they have made real progress now towards giving a sustainable debt position for Greece.

"Of course the Greek people, the Greek political system has to deliver really difficult decisions now but I don't think Greece has any other option."

He added: "The other significant point about last night's deal was that the rest of the eurozone signalled a willingness to stand behind their currency and stand behind Greece and frankly all along the failure to deal with the Greek situation has caused uncertainty.

"Hopefully we can all move on now and get the European economy growing."

But Alistair Darling, former Labour chancellor, said he was "very sceptical" about the deal.

"It had to be done but it does not get you out of the woods at all," he said.

"Even if Greece manages to do everything that has been asked for it, in eight years' time they will still have a debt of 120% of their GDP. You have to ask, with a frail economy like Greece, whether that is possibly realistic in terms of seeing Greece come through that.

"The second thing, which is a problem which is also affecting the other, more weak economies in Europe, is where are the policies that are going to get growth. If you don't get the growth, you don't get the income to get down your borrowing and therefore your debt."

He added: "That is a real problem now. The eurozone, with this ridiculous treaty they have locked themselves into, are almost going to inflict perpetual inflation – further cuts, further suppressing of growth, and that points, to me, to the fact that, I suspect, Greece will be back at the table at some point and, if the eurozone is not very fortunate, other countries will be back as well. It is highly unsatisfactory."

Deputy prime minister Nick Clegg said he hoped the bailout would be a "lasting solution" to the crisis.

"It's not good for anybody in Europe to see the whole eurozone arrangement stumble from one Greek controversy to the next," he said.

Private holders of Greek debt will take losses of 53.5% on the value of their bonds under the plans, although the loss to investors could hit 70% once the process is complete.

Nevertheless, the euro rose after the deal was signed, following months of uncertainty and 13 straight hours of negotiation.

Left wing groups and trade unions despaired at the news, however, as they awaited years of further austerity and little sign of growth in the economy.

Social unrest has reached fever point in Athens as anti-government protesters take their struggle against austerity measures to the streets.