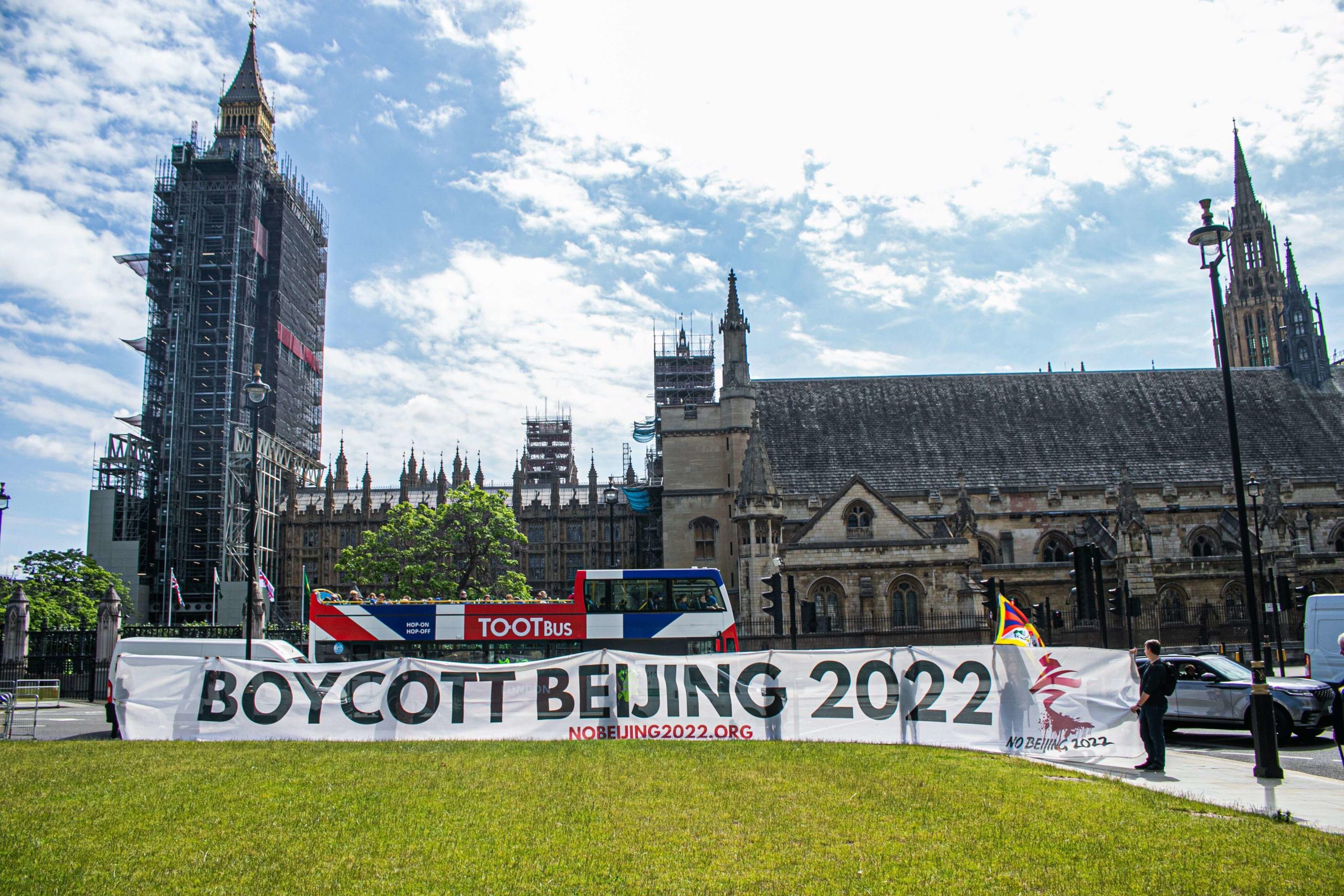 The Beijing 2022 Boycott debate: Too far? Or not far enough?

On Monday, the US announced a diplomatic boycott of the 2022 Winter Olympics and Paralympics in Beijing, over concerns about China’s human rights abuses.

The diplomatic boycott means that athletes will be free to compete, but US government officials will not attend the games.

“If the U.S. is bent on having its own way, China will take resolute countermeasures,” China’s foreign ministry spokesman Zhao Lijian told reporters on Monday.

Pressure for action has intensified in recent weeks after Chinese tennis star Peng Shuai disappeared after taking to Chinese social media to accuse a former senior Chinese politician of sexual assault. The Women’s Tennis Association said last week that they would suspend any future games in China until Ms Shuai’s safety was proven.

It has been widely reported that there is an “active discussion” within the British government about whether to follow Washington’s lead.

What is happening in Xinjiang?

Since 2017, at least a million Uyghurs and members of other Turkic Muslim minorities have reportedly been transferred to ‘re-education’ camps in China’s Northwest region of Xinjiang. Detainees are reported to be subject to political indoctrination, forced labour, coerced into renouncing their religion and culture and, are often subjected to torture, rape, and organ harvesting. Women in and outside the camps appear to be regularly made victims of forced sterilisation and abortion.

Newcastle University’s Dr Joanne Smith Finley, who was sanctioned by the regime earlier this year, told AP, “It’s not immediate, shocking, mass-killing on the spot type genocide, but slow, painful, creeping genocide…These are direct means of genetically reducing the Uyghur population,” which the US State Department formally recognised as a “genocide” in January.

Beijing’s repression in Tibet and its crackdown on democracy in Hong Kong have also been cited as reasons to pursue a boycott of the Games.

Will the UK government decide to boycott the Games?

Prime minister Boris Johnson has already dismissed the idea of a full sporting boycott of the Games – despite concerns over China’s well-documented abuses against the Uyghur Muslim minority – and he told MPs earlier this year that the UK did not “normally” support sporting boycotts.

The British Olympic Association have been keen to follow this logic, saying earlier this year that: “As we saw in Moscow in 1980, sporting boycotts don’t work. They penalise the athletes whilst leaving the greater political problems unaddressed or unsolved.”

Former Tory minister Tim Loughton wrote to the prime minister last Wednesday, urging him to ban any official UK representation at Games, which are set to kick off on 4 February next year.

Shadow foreign secretary David Lammy has said the government must “finally take a stand” in light of Monday evening’s news.

Foreign secretary Liz Truss has been highly critical of the Chinese government, and has emphasised her hope for establishing new security alliances with democratic countries to counter the influence of both China and Russia.

Earlier this year she reportedly privately backed the “Genocide Amendment” to the trade bill which proposed giving preliminary power to determine whether genocide is occurring in Xinjiang, or elsewhere. However she eventually toed the government line when it came out against the plans, and there is no sign she is necessarily in favour of an Olympics boycott.

In November the leader of the House of Commons Jacob Rees Mogg said “no tickets” had been “booked” for government ministers to attend the Games, but fell short of officially announcing a boycott, reiterating the line that the British government “have long had a policy of thinking that sporting boycotts do not work and that it is a matter for the International Olympic Committee to decide whether the athletes go.” This is despite the fact that a purely  diplomatic boycott would not prohibit Team GB from competing in the Games.

In its response to the foreign affairs committee’s special report “Never Again: The UK’s Responsibility to Act on Atrocities in Xinjiang and Beyond”, the government said it “has not made any decisions” regarding a potential diplomatic boycott of next year’s Winter Olympics and Paralympics in Beijing.

Richard Baka, co-director of the Olympic Research Network at Melbourne’s Victoria University, told the New York Times that he expected 20 to 30 countries to follow the US suit: “I think it’ll have significant support because it’s soft, it’s not too hard,” he explained. “If countries want to, they can even support it without making a statement or notch it down a level by not calling it a boycott.”

Since Monday, the governments of New Zealand, Australia, Lithuania and Scotland have all said they intend to follow the US’ lead. However, Holyrood’s snub is mostly symbolic given that they are not in charge of foreign affairs.

The Olympics: a history of controversy

The inaugural boycott of the modern Olympics which began in 1896, occurred at the 1956 Summer Olympics in which the Dutch, Spanish and Swiss teams were absent in protest at the Soviet Union’s recent violent repression of the Hungarian Uprising. The People’s Republic of China also boycotted as Taiwan had been permitted to compete.

South Africa was not permitted to compete at the Olympics from 1964 and until 1992, due to concerns over its apartheid regime.

In 1980 the United States and 64 other countries initiated a full boycott of that year’s games in Moscow in protest against the Soviet invasion of Afghanistan. The Soviet Union and its allies later boycotted the 1984 Summer Olympics in Los Angeles in retaliation.

The last full Olympics boycott took place in 1988 when North Korea and its allies did not attend the Seoul Olympics.

While White House Press Secretary Jen Psaki explained that the boycott “could send a clear message”, the arguments over sporting boycotts are highly disputed.

During arguably the most infamous Olympics, the 1936 Summer Games in Berlin, some athletes skipped the event due to the regime’s persecution of its Jewish population, but no major boycotts went ahead. Indeed, African American track star Jesse Owens achieved stellar victories, putting Nazi racial myths to shame.

However, the Games allowed the Third Reich to present a distorted view of its policies to global visitors and media. And as John Soares, a professor of history at the University of Notre Dame, has highlighted, Jesse Owens achievements sadly did not ”convince the Nazis to rethink what they were doing,” and the regime went on to commit some of the worst crimes in human history. While many argue that western media and official presence at the Games could help transparency it seems that it could just as easily bolster the CCP’s internal and international propaganda efforts.

Too far? Or not far enough?

Yanzhong Huang, a senior fellow for global health at the US-based Council on Foreign Relations think tank has also warned against the level of threat China’s retaliation could pose. “If Beijing perceives that it has lost face, it could react pretty strongly,” he argued. Beijing certainly has the leverage to cause a headache for British authorities if it were to disrupt trade and international negotiations or sanction further foreign officials in fury at a boycott.

Some campaigners have also called for corporations to withdraw their sponsorship of the games in order to apply pressure, but no major companies have agreed to do this thus far. Several politicians across the United States and Europe had earlier suggested that the Games be relocated, however this is highly unlikely at this late stage, and would surely  involve a costly and controversial postponement.

Tim Ryan, a US Democrat congressman, said Biden’s diplomatic boycott “does not go far enough.” “China has been a bad actor and everyone knows it — from continuing to stonewall on the WHO investigation of COVID-19 origins to perpetrating genocide and committing mass humans rights violations,’” he complained in a statement on Monday.

The main argument against a full boycott appears to be the hard work of the athletes who would lose out on competing if a national team were made to pull out entirely, though as this has been done before, it is likely as much about the lack of political incentive to do so as it is genuine concern.

Moreover, given that the US decision to impose a diplomatic boycott has been accompanied by reports that it plans to remove a provision from an upcoming bill that would have barred products manufactured by forced labour in Xinjiang from entering the American market, the announcement comes across as an attempt at grandstanding, void of any concrete action to tackle these atrocities at their root.

Whether the British government will choose to follow Washington’s lead this coming February still remains to be seen.