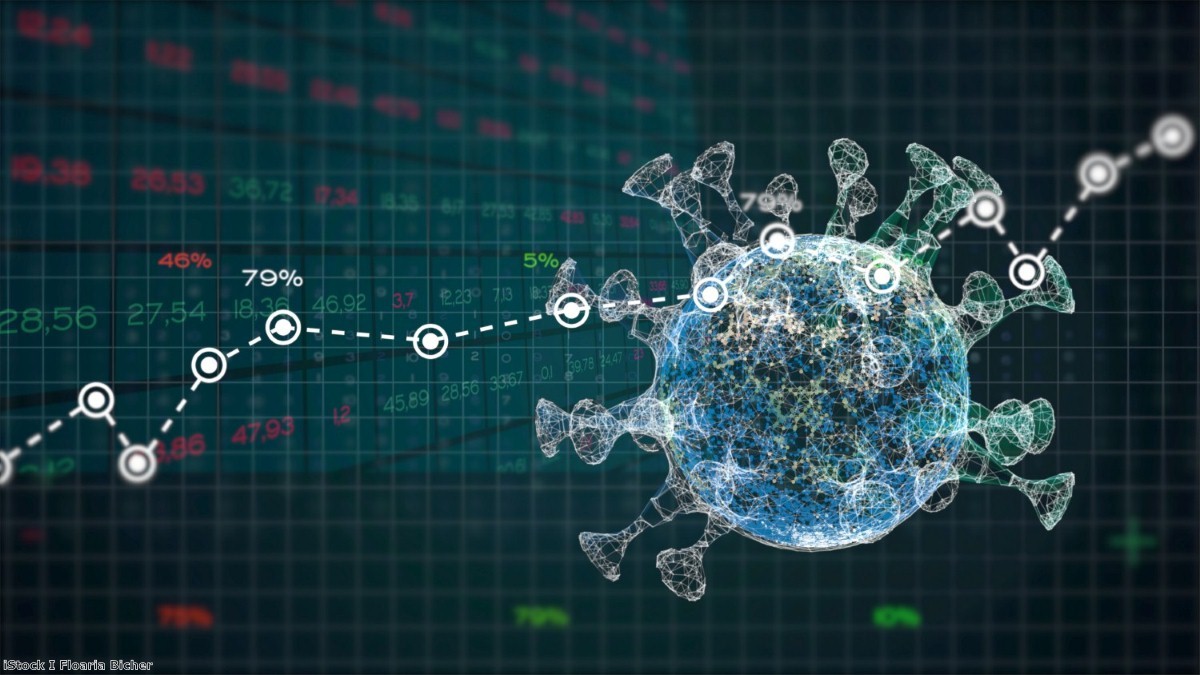 It's the argument that won't go away. Every day, a commentator or politician insists that we just need covid to work its way through the 'low risk' population so most of us can go back to normal. It's wrong and it's dangerous.

Here are the basics. When a large proportion of a community becomes immune to a disease, its spread from person to person becomes substantially reduced. As a result, the whole community becomes protected, not just those who are immune. This phenomenon is often called 'herd immunity' but I prefer 'population immunity' as a less loaded term.

Population immunity can be achieved in two ways: general spread of the disease through the population, or through vaccination. The latter is routinely used to generate population immunity as part of our childhood immunisation programme: for instance, the Measles, Mumps and  Rubella (MMR) vaccination. There is currently no vaccine for covid, so any existing immunity in our population has been acquired through infection during the pandemic or through pre-existing resistance.

Accepting that a population immunity threshold exists is, however, very different to advocating a national strategy of allowing a significant portion of the population to become infected without a vaccine in an attempt to reach that threshold.

As cases of covid in the UK surge once again, the debate has restarted about whether to suppress covid until a vaccine becomes available, or whether to pursue a deliberate strategy of achieving population immunity without a vaccine. The assumption is that vulnerable populations can be protected while the rest of the population, who are at low risk of hospitalisation and death, can be safely encouraged to live life normally and be exposed to the virus without a vaccine. Some even advocate that younger people, because they are at lower risk, should be the first to actively seek infection. "Not only is it a good thing for young people to go out there and become immune," one commentator said, "but that is almost their duty".

It is this deliberate strategy which I find so troubling, for six reasons.

Achieving population immunity without a vaccine might not be possible

We don't know yet how long immunity after recovery from covid infection lasts. While we hope it will be several years, it might be less than one year, as it is for other coronaviruses that cause colds. A few confirmed cases of reinfection have already happened. If immunity does fade within a year, then a population immunity strategy would not be enough to reduce the epidemic until the availability of an effective vaccine, because too many people would be losing their immunity every month. Even a vaccine may only provide short term protection and require regular boosters.

Even if immunity lasted long enough to sustainably reduce the reproduction ratio (R) to below one, there would still be new infections whenever a susceptible person was exposed to someone who had an active infection. Declining cases after population immunity is reached does not guarantee rapid decline.

We cannot seal off the vulnerable

Older age, deprivation, obesity, being from a black and ethnic minority background and health problems such as diabetes, heart disease, lung disease, kidney disease and those who are immuno-compromised are all associated with higher risk of severe illness and death from covid. A study analysing GP records from almost 4 million adults estimated that over 20% of the UK population is in a high-risk category, a quarter of whom are under the age of 70. Another study estimated that almost 30% of the UK population has at least one condition that places them at high risk of severe covid.

This equates to somewhere between 12 and 20 million people who would need to be sufficiently protected, many of whom will be in close and regular contact with other family members, including grandchildren and children. This applies particularly to those living in multigenerational families.

Even if higher risk people agreed to isolate for many months, they would need access to care, health care and key workers such as supermarket staff, plumbers, electricians, delivery drivers and others. Many would be living with lower risk family who themselves would need to isolate or live a restricted outside life to avoid bringing covid home with them.

The many young people who live with elderly relatives in intergenerational homes – disproportionately those of ethnic minority background – or whose parents are vulnerable would be unable to live a normal life. And, of course, there are millions of people of working age who are at higher risk and would either be exposed in the workplace – including teachers, health care staff and other key workers – or need to stop work.

Just concentrating on the very high risk –  the 2 million people who were in the shielding category over the spring and summer – is not a way out. It leaves us with what is known as the 'prevention paradox'. If we lift restrictions on the general population and concentrate only on aggressively protecting those 2 million, the remaining millions of people who are at moderate risk will be exposed to covid much more as the virus spreads in an attempt to get to population immunity, leading to a substantial amount of severe illness and death.

Covid is not harmless in younger people without other health conditions

It is certainly true that younger people without health risks are at very low risk of hospitalisation or death. That said, the risk is not zero. Previously healthy young adults have been admitted to hospital and some have died. Recent evidence given to parliament and from Italy suggests that 85%-90% of people discharged from hospital following covid are still experiencing health problems months later.

Covid is still a new disease. We are finding out much more about longer term health problems after recovering from the initial infection, including in people who did not need hospitalisation and even in those who never experienced symptoms. So far, potentially long term problems have been discovered in the heart, including damage to the heart muscle and lining, damage to blood vessels which creates a risk of clots and stroke, lung damage, brain damage and kidney disease.  We do not yet know whether this damage is permanent nor what proportion of people could be affected.

There is also 'long-covid', where many people who never needed hospital admission report significant symptoms months after initial infection. These often include debilitating fatigue, muscle aches, coughing and breathlessness. The Covid Symptom Tracker App, which has over 4 million users across the UK, found that ten per cent of people had symptoms for longer than three weeks. A recent study from Ireland found that over half of people who had recovered from their initial bout of covid experienced persistent fatigue ten weeks later, regardless of how severe their initial illness was. A study from the US found that one in five people between 18 and 34 years old with no chronic medical conditions had not returned to normal health two to three weeks after they were tested. Childhood admissions following covid infection have also been reported with severe multisystem disease.

It is not ethical to risk the long-term health of people like this, particularly without any form of public consultation or explanation of the risks.

Such a strategy would make existing inequalities worse

Infection levels are highest in the most deprived areas, compounded by more severity of disease among black and minority ethnic populations. These groups are disproportionately represented among key workers, including those in public facing roles and in the gig economy, and they are more exposed to covid because they are less able to work from home.

They are also less likely to be able to afford to self-isolate if sick, more likely to work in covid-unsafe environments and more likely to live in overcrowded, multigenerational and substandard housing. Covid will spread more rapidly, and with greater severity, in these communities while more advantaged communities remain relatively protected. A disproportionate burden of achieving population immunity would fall to our most deprived communities.

We should give science more time to find effective treatments

Since the initial wave in March and April, research has discovered some effective treatments for people severely ill with covid. Patients admitted to hospital with covid now have a much better chance of survival than they would have in March. An enormous amount of medical research is ongoing into new treatments so suppressing transmission of the disease for as long as we can – while waiting for an effective vaccine – will substantially improve outcomes if and when there are future spikes in infection.

We know how to suppress the virus without lockdown

Advocates of a population immunity strategy often suggest that population immunity is the only option. They base this assertion on the belief that suppression "is increasingly infeasible" and that suppression is too damaging to the economy and involves too many restrictions on our personal freedoms, whether that is wearing masks or socialising with as many people as we want. The implicit assumption is that strict comprehensive lockdowns are the only means of suppressing the virus.

This is not true. It ignores the substantial evidence worldwide of countries who have not only suppressed the virus during the initial wave, but are continuing to suppress the virus with very few daily cases and deaths. This not only includes New Zealand, which is a much smaller and less crowded country than the UK, but also countries with large urban populations such as South Korea (50 million people), Japan (126 million people), Thailand (70 million people) and Vietnam (97 million people).

We can learn a lot from these countries: they managed to suppress the spread of covid through a combination of consistent public health messaging, behavioural strategies including social distancing, hand hygiene and mask wearing, some restrictions on mass gatherings, and, most importantly, using robust testing, contact tracing and isolation.

Those countries which suppressed the virus most aggressively and rapidly tended to experience the least impact on their economy. The European country with the best testing and tracing system is probably Germany: they experienced far fewer deaths and less economic impact than similarly sized European countries, including the UK. While we still do not have a test and trace system that is fit for purpose, we have good evidence as to how it should be done: a de-centralised local strategy, and partnership between local government, public health bodies, primary care and local communities.

Given the current rise in cases and hospitalisations, we do need more restrictions to halt the spread of covid until testing and tracing can take much of the strain – but this is a matter of weeks, not months, and restrictions do not have to reach full lockdown levels. We should not just give up and pursue a population immunity strategy simply because building a good test, trace and isolate system is hard.

Christina Pagel is professor of Operational Research at UCL and director of the UCL Clinical Operational Research Unit. Her main research area is using mathematical tools to support delivery of health services. She is a member of Independent Sage, a group of scientists who are working together to provide independent scientific advice to the UK government and public on how to minimise deaths and support Britain's recovery from the covid crisis. Their report on population immunity is here. You can follow her on Twitter here.