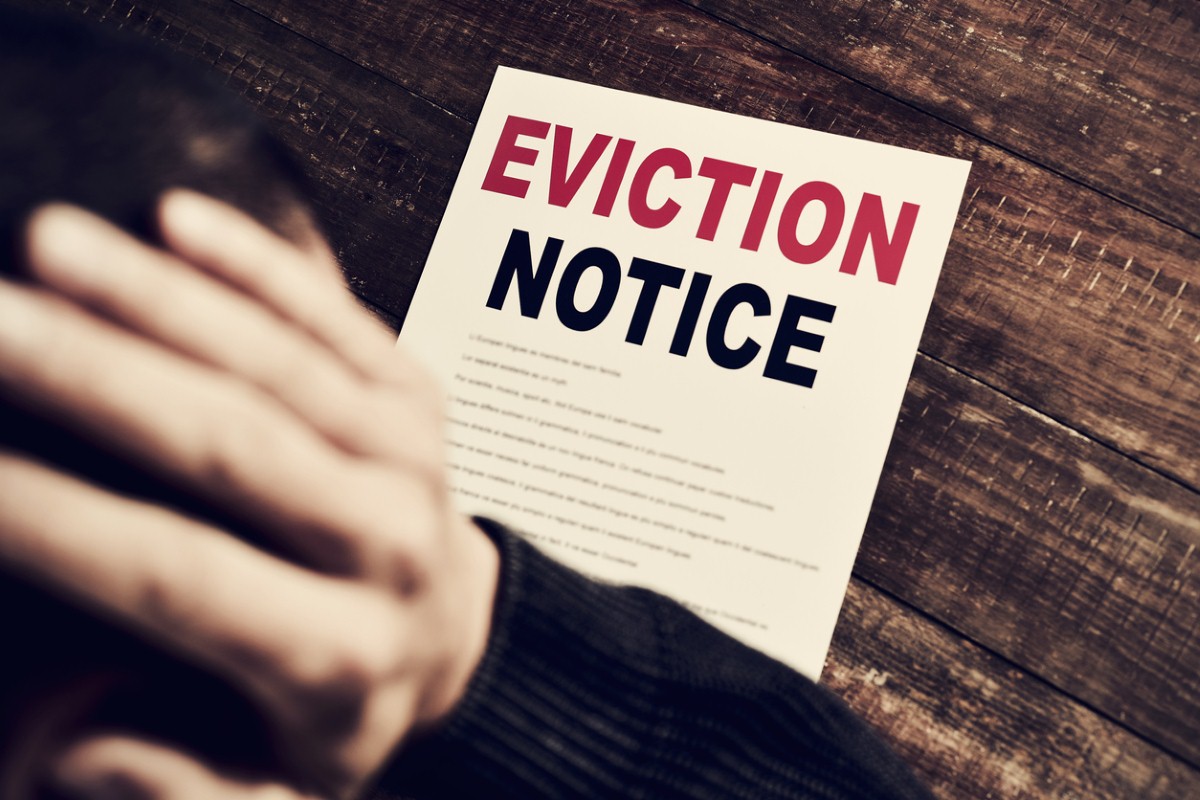 ‘As far as I care, you can sleep in your car’: The Corona tenants

Maria had just discovered what it means to be a tenant in the time of corona. It was June 5th and her landlady was ordering her to move out of her lodging that very day.

Just 24 hours earlier, she had given Maria a month's notice to leave, accusing her of using too much water when she washed her hands in line with government advice, and of damaging the property.

Now all of a sudden, she was being summarily kicked out.

"I was feeling all the emotions at the same time," Maria says. "I was scared, I was anxious, I was confused, I couldn't believe what was happening. I wanted to cry."

Maria had been lodging in the house in Bristol for three years when the pandemic hit. Despite there being five other occupants, the landlady blamed her alone for the rising water bill.

"She would be literally breathing on my neck [when I washed my hands], checking on how much water I'd use. She kept watching me all the time," Maria says.

"One day she came up to me and shoved the water bill in my face. She wanted me to pay £300 extra."

On June 4th, she gave her a month to move out after accusing Maria of deliberately damaging her bedroom window – "Why would I damage my own window?" Maria asks – and the next day, she called her into the bathroom they both used and unleashed an even more bizarre accusation.

"She points at the ceiling in the bathroom. And she's like, 'oh, what is that?' I was like, 'what do you mean?' 'Oh, there's black mould on the ceiling'.

"She accused me of pouring water and bleach on the ceiling on purpose to damage the property. That's what she accused me of. Why would I do that? Like, that doesn't make any sense.

"And the worst thing about it is she's a nurse."

Despite everything, in some ways Maria got lucky – she was able to stay at a friend's place for a week before finding a new long-term tenancy, though she has little hope of getting back her £420 deposit.

But the situation facing tenants is perilous. Amid a crisis exacerbated by underlying inequalities, lodgers like Maria face more inequality than most, with few legal rights or protections. But even renters with long-term tenancies face a multitude of threats.

Politics.co.uk has heard of numerous cases of rising rent arrears and illegal evictions since lockdown began. Vital repairs have been delayed, with one block of flats left without running water at a time when personal hygiene is paramount. Some landlords have even tried to put the rent up in the middle of the pandemic.

Many migrants are at particular risk due to their insecure legal status and lack of access to benefits.

"If you are undocumented or you don't have the right to be here, then obviously that makes it a bit more complicated, because the landlord, if they know that, they hold some power over you – so whether you're going to stand up to them is another matter," says Fizza Qureshi of Migrants' Rights Network.

And then there's section 21.

Section 21 is the 'no fault' eviction route. It allows landlords to kick tenants out for any reason, as long as the correct procedure is followed and three months' notice is given.
The government suspended legal evictions at the start of lockdown, first until 23rd June and then until 23rd August.

But as incomes fall and rent arrears rise, section 21 eviction notices have been piling in, ready to take effect once the evictions ban is over.

“Nobody should lose their home because of coronavirus," says Polly Neate, chief executive of Shelter. "But if the government fails to act, tens of thousands of renters who’ve lost their livelihoods will soon face this terrifying prospect.

"When the evictions ban lifts on 23rd August, anyone in rent arrears could face automatic eviction from their home. This could unleash a tsunami of homelessness that councils would struggle to cope with."

Aidan Cassidy of Acorn, which campaigns for tenants' rights, says he is aware of 10-20 cases of landlords issuing section 21 notices during lockdown, just among Acorn's thousand members in Bristol.

"Due to coronavirus and the whole load of financial issues that it's caused, a lot of people have missed rent payments," says Cassidy. "Lots of landlords have unfortunately decided to act without any sort of thought for the wellbeing and health of their tenants, and have essentially evicted them or given them a section 21 notice because of these rent arrears."

One such case is an elderly self-employed handyman who can't work during the pandemic and has faced delays to his benefits, leaving him £150 in arrears on his rent.

It's a relatively small amount – but it's proved enough to trigger a section 21 notice.

"Instead of the landlord being sympathetic or reasonable, he's just said, 'no, we're not even going to talk about this, you've got three months to get out'," says Cassidy.

What makes this even worse is that he has chronic obstructive pulmonary disease, a lung condition that makes it hard to breathe and places him firmly on the 'shielding' list of people at heightened risk from coronavirus.

"Obviously if he is now evicted, he's at massive risk," Cassidy explains. "There's absolutely no way he can go about his normal business looking for a new place. The lockdown might be over but the virus is very much still out there and I think any suggestion that life is back to normal for people who are very susceptible to coronavirus is just nonsense."

And evictions have a sting in the tail that increase the risk of enduring homelessness.

"If people are evicted with rent arrears under section 21, the landlord can then take whatever they can off those arrears from their deposit," says Portia Msimang of Renters' Rights London. "So people are left with no deposit with which to get another property. And this is how people fall into homelessness."

Short of eviction notices, rising rent arrears are a looming crisis. With the economy likely to be hamstrung for months to come, many tenants will be financially squeezed while landlords come knocking for missed rent – one of the biggest sticks of dynamite in a bulging debt timebomb also comprising utility bills, loans and council tax.

The Institute for Fiscal Studies (IFS) calculates there were 11 percent fewer rental payments in April and May than a year before. Both the debt advice service StepChange and the Resolution Foundation think tank have estimated that just under 600,000 tenants in the private rented sector are in arrears, while Generation Rent says arrears have trebled.

The government has boosted Universal Credit, reversing years of cuts – but still not enough to cover average rents in a local area.

It has also advised tenants to negotiate rent reductions with their landlords – a laughable prospect for many tenants. Acorn branches report occasional successes, but for the most part landlords hold the whip hand in Britain's housing crisis and don't want to know. The IFS has found only one or two percent of tenants have received a rent holiday.

What makes the situation particularly egregious is that the Tories promised to abolish section 21 evictions in their 2019 manifesto. Yet nothing has happened.

A statement from the ministry for housing in response to this article did not specifically mention a ban on section 21: "We are committed to bringing forward legislation to enhance renters' security as part of the largest changes to renting in 30 years.

"We are working with the judiciary to ensure when evictions proceedings start again, arrangements, including rules, are in place to give appropriate protections for those who have been particularly affected by coronavirus.”

Most organisations campaigning for renters' rights agree on the need to increase Universal Credit to cover average rents, and scrap section 21.

The issue of arrears is more contentious. Forcing landlords to waive rents and cancel arrears may contravene the Human Rights Act – one reason Labour dropped this approach under Keir Starmer, sparking anger from campaigners who fear Labour's new policy would leave tenants with unpayable debts.

Generation Rent's solution is to effectively extend the government furlough scheme to landlords, covering 80 percent of their monthly income up to £2,500 a month per tenant – with councils able to restrict the payment on the basis of need.

Then there are rent strikes. Heather, in Haringey, lost her work income during lockdown. After her landlady refused her request for a rent reduction, and with benefits not covering the shortfall, she got involved with the London Renters Union and simply stopped paying. She hasn't heard from her landlady for two months.

"For me it's not just a means thing," Heather says. "It started out like that, but now it feels much more like part of a movement against landlords, against this culture of people accruing lots of wealth by not actually paying anything into the system."

And this is a feature of Britain's economic response to coronavirus. Employers have taken a hit. Workers and tenants have taken a hit. But landlords, the part of the economy that produces the least value, have had the most protection of all.

The names of tenants have been changed in this article.