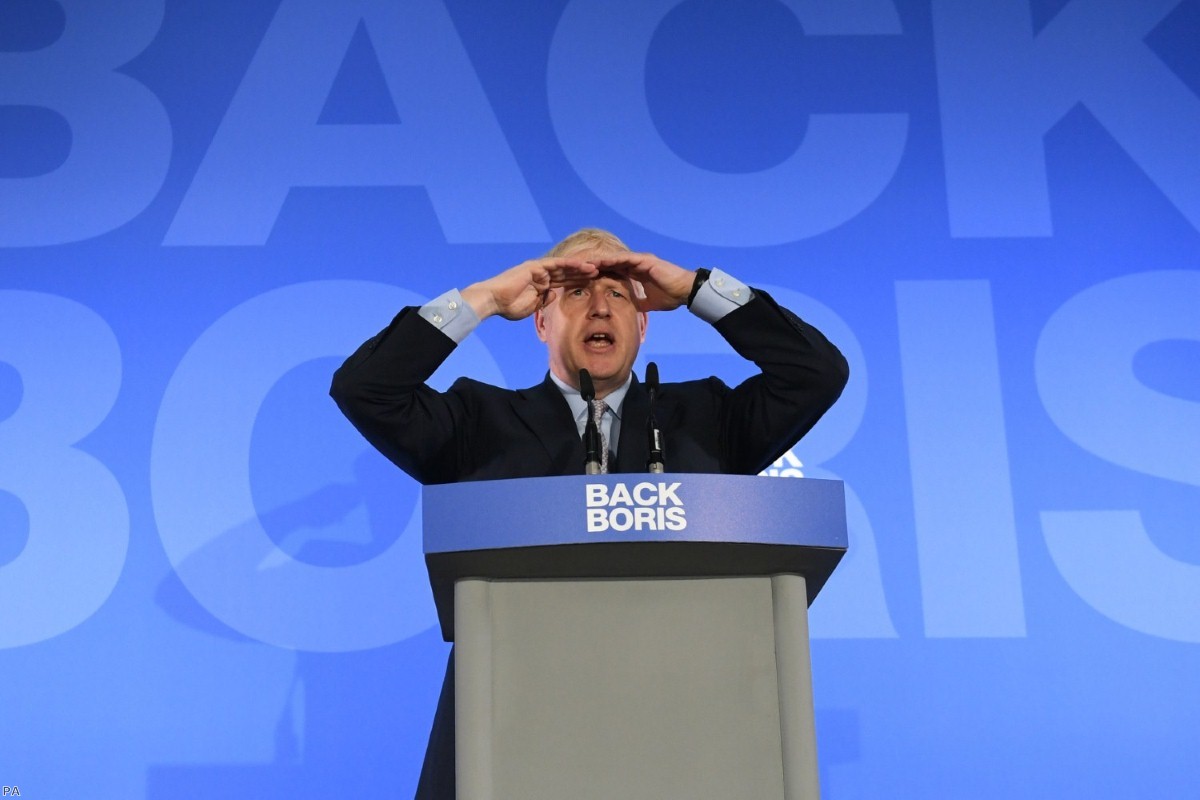 Boris Johnson is heading for Downing Street, but he’ll hate the experience as much as we will

We know life is unfair and countries, like people, don’t always get happy endings. Today our party of government more or less confirmed that Boris Johnson would be the steward of our definitive national decline, and couldn’t give a damn if the 65.9 million non-members of the Conservative party like it or not. After all, people without private jets don’t get to choose their pilots, so there’s no reason why people without Tory voting slips should get to choose their prime minister.

114 Tory MPs opted for Johnson in the first round of votes for the new leader. If there was a crumb of comfort, it was that 199 (almost two-thirds) did not. You thought for an optimistic moment that maybe they saw through him after all. And then you remembered that 47 had voted for the combined personality-free Brexit death cult of Dominic Raab, Andrea Leadsom and Esther McVey.

Why did Johnson win? Easy. It’s because the Tories think he can help them to win. Like a father who attempts to play Barry Manilow at his teenager’s rave, the Conservatives do not fundamentally understand popularity and are several years out of date when they try. It’s true, Johnson may have been popular – and that word is doing heavy lifting – in the late 2000s. ‘BoJo’ was the Conservative for people who loved to mock Conservatives, liberal enough for Highgate dinner parties but still neo-colonial enough for the Spectator magazine. He could simultaneously inhabit the born-to-rule Etonian for those who wanted to tug forelocks, and parody it for those who wanted to enjoy a joke.

But those days ended on the morning of 24th June 2016. Johnson had led the country through the most cynical and dishonest election campaign it had ever seen. People jeered as he drove out of his house. Young people, liberals and Remainers in general didn’t find the ex-mayor as funny now he had destroyed their futures. Play-time was over, and so was the electoral magic.

But Johnson does have something going for him: his loyal followers. This phenomenon he shares with the President of the United States. Johnson is every bit as solipsistic, dishonest and malevolent as Donald Trump, and as emphatically lazy, erratic and ineffective. Neither deserves the power or adulation they have mysteriously accrued. And yet, to echo Trump’s famous line about shooting someone on Fifth Avenue and still topping the polls, literally nothing Johnson does seems able to hurt him. The cavern of lies, misdeeds and  personality flaws which would incapacitate most other politicians are, we are told, “priced in”, despite the fact he has nothing of value to sell. Even today’s revelations that, as foreign secretary, he allegedly told EU ambassadors he was personally in favour of free movement of people, thus privately torpedoing both his government and his own Brexit campaign (full disclosure: I revealed it), will do nothing to dent his popularity with the party faithful. Remainer? Leaver? Hypocrite? Chancer? Just call him Boris and enjoy the thrill.

The key consolation – let’s face it, the only consolation – is that Johnson’s honeymoon will last all of a few weeks. If Downing Street looked brutal for Theresa May, you haven’t seen what’s waiting for her successor. Johnson craves power, but will be unable to do anything with it.

There is literally no way that he emerges from his first few months as prime minister with credibility or appeal. If he opts for a rapid election, as some suspect – no doubt on a platform of no-deal – then he will face a comprehensive mauling. A genuine coalition stretching from the Tory centre to the Corbyn left will unite against him. If parliament forces his government out by a vote of no-confidence, he will encounter the same fate. The European elections demonstrate that a large majority of voters reject no-deal, and they will certainly not waive their disgust just to appease Johnson.

If, on the other hand, Johnson goes for no-deal without an election, parliament will do all it can to stop him and the Speaker, John Bercow, will do everything he can to assist. If MPs want a vote either to revoke Article 50 or to force a request to extend it, Bercow will find a way for them. That leaves Johnson either extending Article 50 and forfeiting all his early goodwill, or returning to the earlier scenario of a ruinous general election. And in the remotest possibility that we do end up crashing out of the EU with no deal, the prime minister will find himself blamed, despised and forced back to Brussels. Put simply, no sooner will he enter Downing Street than he’ll sign a short time-delayed warrant for his removal.

So we’ll be honest about this. Today was dispiriting. You may wail, lament and mourn, longing for the old rational country whose prime ministers displayed basic fitness to lead. But even if we have struck disaster with Johnson, he won’t in all likelihood be steering us for long and we will almost certainly avoid the worst of the rocks. He can’t change the current parliament, and if he tries, he can’t change the electorate. Whatever he attempts will fail, the country will turn on him, and eventually he’ll want to leave. Perhaps Johnson will achieve his life-long ambition, realise he never even wanted it, and it will be the happiest ending for both him and us.