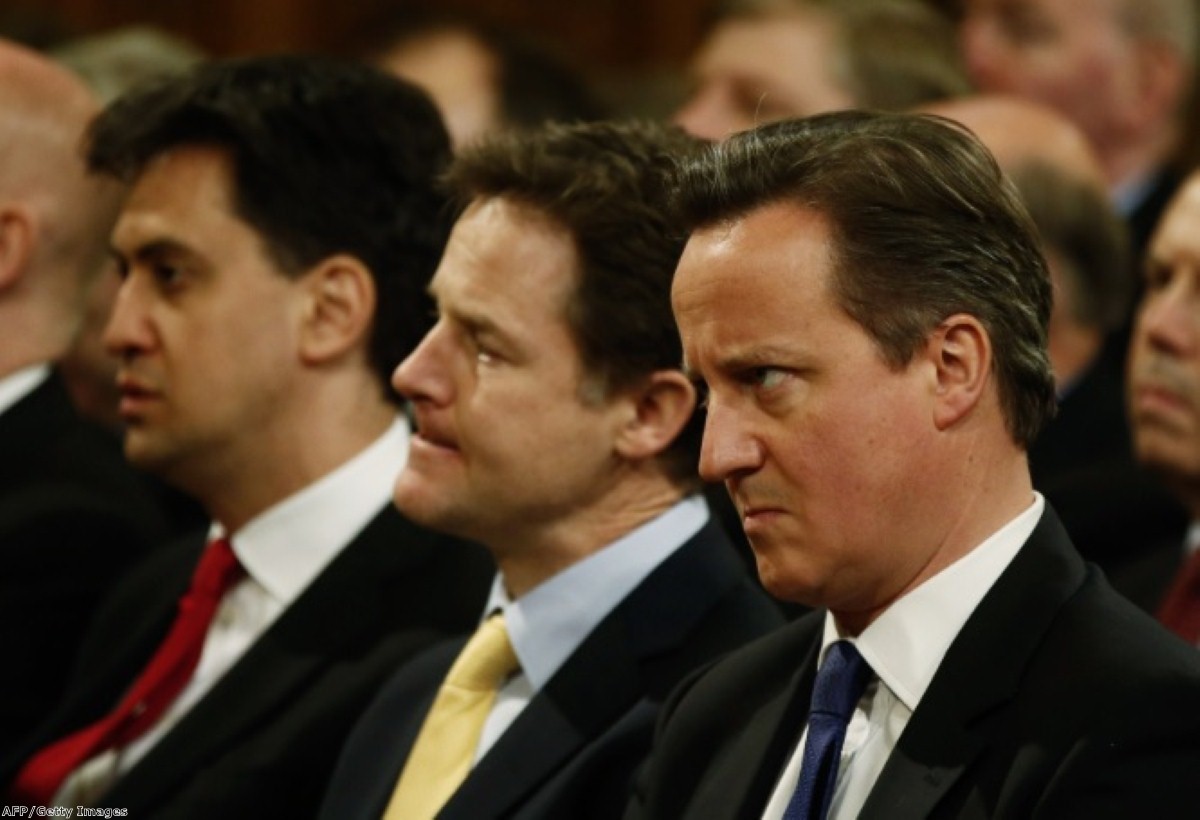 The 2011 new year messages were full of optimism and ambition; their 2015 sequels are jaded, electioneering paeans peddling hope instead of offering it. Here's a look at how the three leaders have shifted their tone…

At the end of 2010 the new deputy prime minister was in exultant mood:

"Well what a year! A white-knuckle election; a new coalition government; Liberals in power for the first time in 70 years."

He claimed he was delivering on all four of the Liberal Democrats' four election priorities (fair enough) but was prepared to accept this was going to be tricky:

"I don't want to pretend it has all been easy. These are testing times for the country and for our party too. Action to tackle the deficit, and the need to reform higher education, have forced us to take some incredibly difficult decisions. But that is government. And when we promised people that we were ready to govern, that is the commitment we made."

That reference to the tuition fees debacle was in stark contrast to the grovelling apology that was to follow. He was optimistic, too, about pursuing "radical reform of our political system"; that didn't exactly work out.

He talked of "making sure the economic recovery is green and balanced", too. That environmentalist rhetoric, it's worth noting, has very much evaporated over the passing years.

Instead, in 2015, Clegg has reached a state of mind where he continues to advance the old arguments while simultaneously knowingly accepting that they're not necessarily working.

Hence this remarkable doublethink about remaining upbeat, even though all the instincts are going the other way:

"2015 should be a year for optimism. I know it might not always feel that way, the last year has been another tough one for many people. And when times are tough, some politicians, instead of telling it like it is and offering a positive way forward, respond with easy simplistic answers or by telling us who to blame. And when that happens, instead offering hope and a way forward, politics becomes about picking a side – us vs them, fear instead of hope."

His talk of making coalition work, and proving that "plural politics" is the best thing since sliced bread, is replaced with dark mutterings about conflict with the other parties: "I've had to fight inside government, every day, to make this government fairer, to make sure this coalition has stayed on the centre ground," he says.

Clegg's mental state now is about facing up to the consequences of actions – others, but also his, too.

"Denial is no way to run a country. Denial won't fix the economy or help working people. Choosing between Labour and the Conservatives is a pretty grim choice to make."

He adds: "So this year, make another." Given the Lib Dem election strategy is about holding on to as many votes as possible, this is quite a roundabout way of appealing to voters to do exactly the same thing as they did in 2010.

Four years ago Ed Miliband was still an unknown quantity. Was he going to lurch to the left, or attempt to become another Tony Blair and stick to the centre-ground? His new year's message for 2011 wasn't offering many answers:

"I said in my Labour party conference speech that I have never believed that all wisdom resides in one political party. That is why I want to reach out to all other forces of progress in Britain… 2011 will be a year where we work to change Labour and seek to rebuild trust in us and in politics as a force for good."

His message now reads rather painfully. He suggests that politics is "high-handed, remote and arbitrary", which is exactly how critics have described him.

Miliband identifies the chief problems of austerity Britain, but does so in the general terms that have blighted his time in opposition:

"I sincerely believe that we can build a better future for Britain. That means closing the gap between people's aspirations and their chances of fulfilling them, being a society where we look after each other and meeting the promise that the next generation does better than the last. That is our mission as a party which we will pursue next year and in the years ahead."

Jump forward to the end of 2014, and Miliband is saying virtually the same thing:

"I don't have to tell you that all over our country today, there are people working harder and harder, but standing still: families struggling with bills that are growing faster than their wages; young people, taking on mountains of debt to get a proper education, only to find themselves with no job at the other end; and an NHS where people are waiting longer and longer to get the care they need."

Things looked bleak back then, and now they look even bleaker. What has not changed, though, is any sense of Miliband's direction.

Just as his new year message for 2011 was one of vagueness about the precise political path he was going to end up on, so the message for 2015 is rather fuzzy around the edges regarding exactly how he's going to achieve changes.

"In the coming months, I look forward to sharing our ideas with you about how we raise wages, give our young people a proper chance to get on, set fair rules for immigration and rescue our NHS. None of this will be easy or instant. But it is possible if we run the country in a different way: with a different idea, a different plan: putting working people first. And I know we will be a better, stronger and more prosperous country for it."

"2011 is going to be a difficult year, as we take hard but necessary steps to sort things out," the prime minister said four years ago. But the actions we are taking are essential, because they are putting our economy and our country on the right path. Together, we can make 2011 the year that Britain gets back on its feet."

It didn't get back on its feet. And it was not the year that most of the "heavy lifting" was accomplished.

Back then, the expectation was the austerity would only take one or two years of pain to resolve itself. It didn't quite work out that way, did it?

But with a strategy of pain until 2013 and bread and honey after that, Cameron could afford to talk up the suffering:

"Each and every minister in this government is acutely aware that the plans we have in place are tough, in fact incredibly difficult. But we're clear that the alternative – indecision and delay, would mean taking unacceptable risks with our economy, our country and our people."

Cameron was committed to the coalition back then, too:

"I didn't come in to politics to make cuts. Neither did Nick Clegg. But in the end politics is about national interest, not personal political agendas."

As the general election approaches, though, those personal political agendas are becoming important once again. Yet of all the three party leaders, it's the Tory who refrains  from targeting his opponents directly.

Our New Year's resolution must be to stay on course to prosperity – and secure a better future. My message in full: https://t.co/SoQ4irku7E

Instead he lists the government's achievements and uses a very general 'we':

"None of this happened out of thin air. It’s because we put in place a long-term plan with some clear values at its heart."

The Conservative election slogan screams out from there, of course. Here it is again just seconds later:

"Our long-term plan is working. Our country is being turned around. But let us be clear. With this new year comes new challenges."

Those challenges, it turns out, are Miliband-shaped, although the Labour leader isn't referenced by name. Cameron urges the British people to stick with the Tories:

"This should be our resolution: to stick to the plan, stay on course to prosperity, and keep doing the important, long-term work of securing a better future. 2015 can promise to be a great year for our country – if we make the right choices together."

It's the best new year message of the three, but also the one which has changed the most in four years. At the end of 2010, No 10 hoped that by now the UK would be basking in the warmth of a full-on economic recovery. As it is, the recovery has not quite worked out; the PM is obliged to urge voters to "stay on course" and "stick to the plan". It's not the new year message he wanted to write.