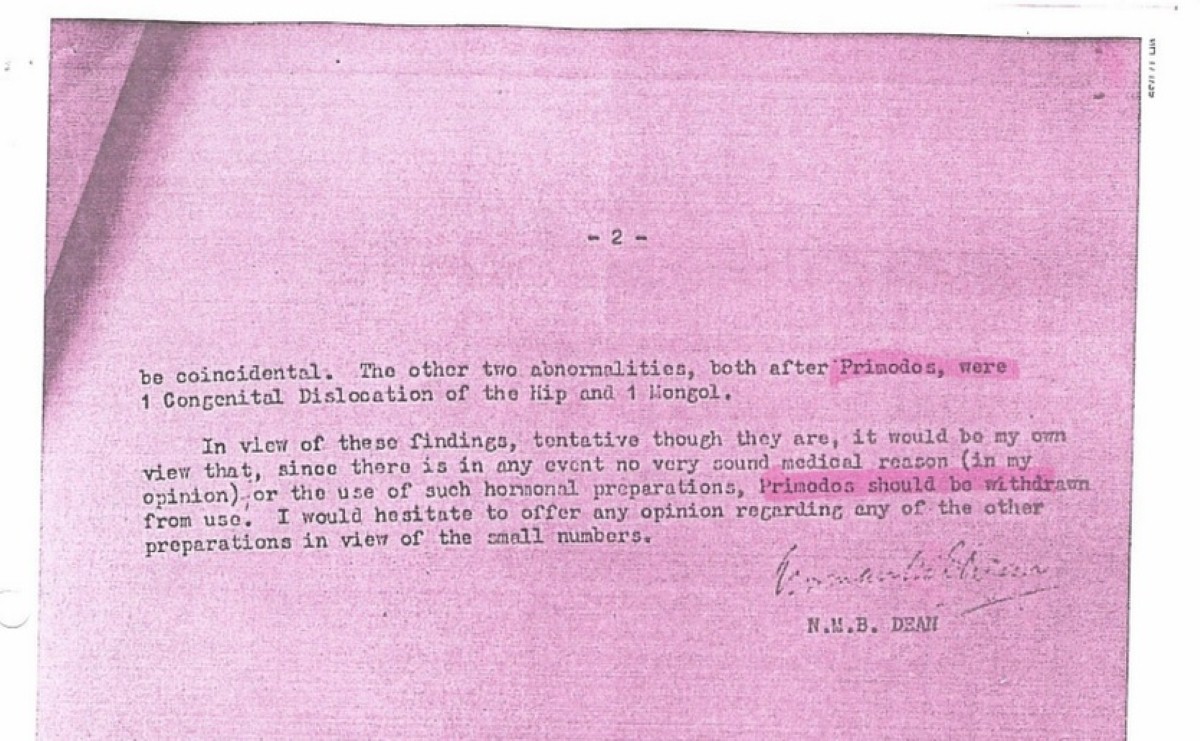 Comment: We need justice for the victims of Primodos – the forgotten Thalidomide

"I have seven spleens. My stomach is on the wrong side and I have had several operations in attempts to correct this. I was born with a number of adhesions and obstructions. I also have spinal defects and internal congenital malformations. I have had to struggle throughout my life."

These are the poignant words of my constituent Nichola Williams, a story she painfully shared with me on a Saturday afternoon two years ago.

When her mother suspected she was pregnant in 1971, she visited her GP and was prescribed Primodos, a hormone pregnancy test.

Primodos was a hormone-packed pill, manufactured by the pharmaceutical giant Schering now known as Bayer. Its ingredients were similar to oral contraceptives but 40 times the strength. The test worked by inducing a period if the women was not pregnant.

However files discovered by campaigners and recently brought to my attention reveal that, in 1967, a paediatrician at Queen Mary's Hospital in London, Dr Isabel Gal, found a link between hormone pregnancy tests such as Primodos and spinal congenital malformation in newborn babies.

Triggering alarm bells, the Royal College of General Practitioners produced figures for Schering showing higher rates of miscarriages, infant deaths, and abnormalities in babies whose mothers had taken Primodos. The report's author NB Dean concluded that the "drug should be withdrawn".

Similarly a letter to the Medical Research Council states: "It looks like in fact this could be another thalidomide story."

This alarm-bell letter from 1967 letter warned: "It looks like in fact this could be another thalidomide story."

Sifting through the hundreds of documents and files from government departments delivered to my office by campaigner, I discovered that concerns had been raised by gynaecologists and paediatric research departments. It had become clear that Primodos could affect the foetus or even cause the child to abort.

The drug should have been immediately suspended pending full clearance by the committee. Instead, documents show hesitancy compounded by incompetence and the drug remained on the market.

As a result more than 1.5 million pregnant women were placed at unnecessary risk of being prescribed these drugs. Thousands of children were damaged and still suffer today from dreadful disabilities: heart and limb defects, brain damage, spinal bifida.

Instead of taking urgent action, there is strong evidence that the government did nothing.  The committee on safety of medicines began a belated pilot study only in 1969 and undertook no full study until 1972. This was a leisurely affair, despite the suggested link between congenital abnormalities and hormone pregnancy tests and drugs eventually being found to be supported.  It was not until 1975, eight years after the first reports, that an official warning was published by the committee.

Even the World Health Organisation in 1975 questioned in a paper why research on such a critical issue, published in the late 1960s, was not followed up for many years.

The government's attitude is best illustrated in an extraordinary exchange of letters between the now highly esteemed Dr William Inman, at the time a senior medical officer at the committee on safety of medicines.

In reference to a meeting with Dr Gal he said: "We are defenceless, in the matter of the eight-year delay."

Dr Inman then added: "Isabel Gal is an intelligent, dedicated but RATHER SAD little person…I dealt with her sympathetically, but I do not believe we have heard the last of this matter."

Bayer confirmed to Sky News that the drug was not licenced as a pregnancy test after 1970, and anyone using it as such would have been done so 'off-label' or in other words not as instructed. This includes Nichola's mother and thousands of other mothers who now await answers on why their doctors did not know about this change.

The authorities in Germany, USA, Australia, Ireland, Sweden, Finland and Holland issued warnings and took action on hormone pregnancy tests as early as 1970 – five years before any warning was issued in the UK – in spite of the fact that the committee on safety in medicine was the first medical authority to know of the hazard.

When I first raised this in letters to ministers the standard response was predictable: "insufficient evidence to prove causation". When the health minister Daniel Poulter agreed to meet me, I was informed the Medicines and Healthcare Regulatory Agency (MHRA) would investigate. Eventually a report was published which not surprisingly disregarded all the evidence I presented and once more concluded "insufficient data to conclusively prove a link".

Yes, indeed, the drug company Bayer and MHRA both claim there is insufficient data to conclusively prove a link, but this misses the point. The link which was indicated on the drug's box has not been disproved.  Schering simply discontinued Primodos and never looked back. Nor did the committee on safety of medicine.

But the victims and their parents continue to live with their deformities. Mothers, unable to forget the guilt of using the drug; their children, now grown up, searching for answers on why they were born with abnormalities.

When I raised the issue at PMQs the prime minister appeared touched by the plight of the victims and agreed to meet with me to discuss the campaign.  Surprisingly he agreed to ask his chief scientist to review the data, support my calls for full disclosure of documents still held by the department, and even encouraged the idea of a debate on the matter.

Over 40 years on from when the issue was first raised by the late Lord Jack Ashley, the government has listened. Health minister George Freeman has agreed to set up an independent panel to review documents and listen to the evidence and concerns of the victims. It's a small step in the right direction and indeed a small victory in the bid for justice and closure.

As we await news on the details of the panel, I remind the government that transparency and accountability are moral virtues which our society must continuously embrace. We have seen with the child abuse inquiry that the importance of impartiality of those who are appointed to the panel cannot be overlooked. In the interest of transparency for this inquiry the government must declare its interests on the nature of its own relationship with the pharmaceutical company Bayer.

They say that justice delayed is justice denied. We know that too well after Thalidomide, Hillsborough and many other tragedies. The injustice perpetrated on innocent people has destroyed the lives of children and left thousands of victims still enduring pain and suffering without acknowledgement, apology and acceptance.

Yasmin Qureshi is the Labour MP for Bolton South East

If you think you may have been affected by Primodos or a hormone pregnancy test, please contact marielyon@virginmedia.com