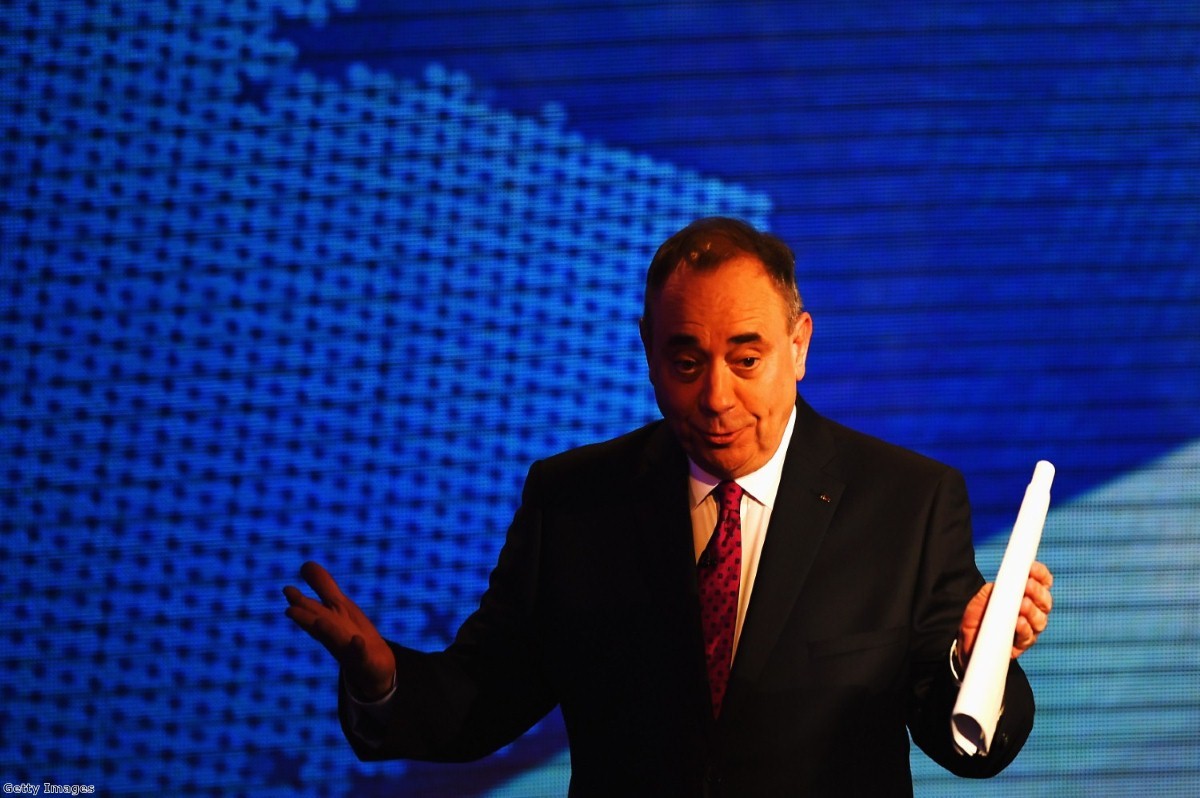 Comment: Salmond’s nationalism is as ugly as all the others

From here in Argyll, where I grew up and have lived most of my life, the road to September the 18th looks decidedly rocky.

For some time now, Scotland has been suffering from a sort of ideological occupation. There is nothing identifiably Scottish which the nationalists haven't claimed as their own and harnessed to their cause. Opposing arguments in support  of the  union are routinely dismissed as being  negative, faint-hearted, 'talking Scotland down', or scaremongering – the SNP's retort  to any question it cannot or will not answer.

What scares me, what should scare us all in Scotland, is the government-approved spirit of  intolerance that would silence every voice which speaks out against the delusion of independence. In the divisive form of chauvinistic thinking that now permeates our national life, even the most loyal, patriotic Scot who ventures an opinion which doesn't flatter  the separatist agenda may be branded a traitor; guilty of what might be termed, Turkish-style, the sin of insulting Scottishness.

There is a muzzling of dissent, here in Scotland of all places. I find it ominous that at an official level any attempt to raise concerns about the consequences of separation is either prohibited or swiftly shut down by the nationalists. Our universities, our cultural and financial institutions, the business community, the media – all have come under  pressure, even intimidation, from the Scottish government. Ever since the SNP took over the reins, there have been  creeping interventions in the organisation of the civil service, the NHS,  policing, the law courts and education with the sole aim of  promoting the nationalist agenda.

Make no mistake, the SNP has been preparing for this moment.

We need to talk about  nationalism. It seems extraordinary, as we approach September 18th, that this subject is so rarely discussed.

In any serious discussion of the independence issue, there seems to be a hesitation, a polite reluctance to mention the N word. It's as if the world's catastrophic experience of nationalism, which Victor Gollancz called "the greatest of all evils", has no bearing on the Scottish situation – the  given, of course, being that the SNP is committed to civic as opposed to ethnic nationalism. The nice, not the nasty, kind. Because it's about  'us', we are asked to  embrace  Scottish nationalism as a uniquely friendly, benign variety that may be seen in the light of our own ancient history but not  with reference to the  European experience of the last two centuries. It's considered quite acceptable  to  dust off the Declaration of Arbroath, but irrelevant and unfair to  compare Scottish nationalism to, say, the secessionist doctrines that tore apart  former Yugoslavia.

Comparisons are indeed odious, but the question brings to mind Salmond's historic declaration on the Balkans, describing Nato's intervention in Kosovo to thwart the Milosevic program of ethnic cleansing as "unpardonable folly". An  isolated slip-up? If only that were the case. How confident can we feel in our  leader's judgement after his more recent comment on world affairs, blurting out his self-reflecting admiration of Vladimir Putin for restoring  Russian national pride?

There are, of course, examples of  countries  that have achieved statehood with endurable birthing pains and without violence, but the point I want to make here concerns the  never far-away possibility that nationalism, an inherently dangerous creed with the potential to do great harm to Scotland and its people, may unleash forces that nobody will have voted for when they put a cross by 'Yes' on the ballot paper.

We owe it to our fellow Britons, as much as to ourselves, to ask what happens post-separation if the dream turns sour? When scapegoats are needed, when ethnic minorities reassured by smiling inclusion start to feel like turkeys who voted for Christmas. How, for instance, will the 500,000 English, Welsh and Northern Irish people living in Scotland  be protected from disillusioned 'real' Scots when disputes with rUK  turn, as they almost certainly will, increasingly bitter? Under an austerity regime, who will protect the poor, the old and weak?  Things, as we see every day on the news,  can  fall apart in two shakes of a lamb's tail.

But this is Scotland, I hear you say, not Syria or eastern  Ukraine. It could never happen here.

There's a misconception, ardently promoted by the nationalists, that a majority 'Yes' vote in September will not only deliver a better deal for Scotland, but lift this country up onto the higher moral ground it would naturally occupy were it not shackled to the other ethically inferior parts of the United Kingdom. Separation, we are told, the freedom to run our own affairs without interference from Westminster, will give a future Scottish government the powers to build that gentler, fairer, more equal society that we all supposedly want. A dishonest, queasily supremacist appeal to  voters – we  Scots, it implies, are not only different but better than others. This is the big, dangerous lie at the heart of the 'Yes' campaign.

It may boost Alex Salmond's popularity to conflate separation from the UK with a cloudless Tory-free  future, but one thing doesn’t necessarily lead to the other.

The  trouble with nationalism is that it does not  represent a coherent set of beliefs, policies and aims that define its essence, as socialism, liberalism or conservatism can be said to do. There's nothing  to stop Alex Salmond  presenting a leftist  program one day, then lurching  to the  right on the next, while still keeping the nationalist faith.  Nationalism is not about finding ways to improve the lives of  ordinary people; it's an emotional response to something  that may not even  exist – a supposed historic injustice or the utopian dream of a glorious  future – but  that  can be nurtured and shaped  into a destiny-fulfilling vision, a  promise. For  those who espouse the cause, the path too  often leads to unquestioning  support for the leader.

Our own voluble leader never knowingly utters a sentence in public that does not contain the word 'Scotland'. I regret to say his tireless, narcissistic boostering of  the native sod has paid dividends, making the man himself not easy to differentiate from our 'restored national pride'. The ubiquitous chip on the shoulder, Salmond can boast, has been replaced by the hand of destiny.

Now we barely flinch, as we  really should, when we hear passing references to 'Alex Salmond's Scotland'.

It is not Alex Salmond's Scotland.

A brave, honest leader would consider it his paramount duty to enlighten the people of Scotland, but the first minister, who likes to talk about 'a nationalism of the heart' – yes, he actually uses those words – sees nothing wrong in playing the 'wee bit hill and  glen' card.

Nationalists are sentimental by default. But there’s an assumption here, a cynical one, that Scottish people –  traditionally canny, cautious and hard-headed enough to have welcomed the union in 1707 for the rescuing prosperity it offered and delivered – can  be easily exploited, can have the wool pulled over their eyes, simply because they  love  their country.

As a Scottish and British patriot, with an affirmative, deep affection for my country, I'm for taking down not erecting barriers and borders, for independence of  mind and spirit  – not for sinking our individuality into  the warm puddle of belonging. I support  the view  that all men are brothers and  that we owe more to our common humanity than to the particular country we  happen to have been born into. Over the long forced march to this referendum, I have yet to hear a single argument  for breaking up the United Kingdom   that  cannot be defeated simply by saying:  'No, we believe in people coming together, not in division and discord.'

When George Orwell wrote that nationalism is "the  worst enemy of peace", he meant at home as well as abroad.

What I fear most from the nationalist vision is the narrowing of the Scottish mind, the stealthy erosion of expectation and possibilities, the limiting of our children's horizons. It surely goes against the grain that as Scots, the most generous and outward-looking of  peoples, we are being asked now to  turn in on ourselves? For the most part, young  Scottish people don't buy the nationalist  dream. They want nothing to do with the grim, blinkered  descent into this shabbiest of  ideological 'isms'. They show no more interest  in becoming Little Scotlanders than they do in joining Ukip. It must indeed be galling  for the SNP, after purposefully enfranchising the youth of Scotland, to have to acknowledge that the tactic has backfired – that the brave new future it  plans for us belongs to those who prefer  their country to stay part of Britain.

Billy Connolly, a fearless stand-up supporter of the union, put it  simply: "The more people stay together, the  happier they'll be".

How did we get here? How is it possible that so many thoughtful, kind, well-intentioned Scots, not all of them nationalists plan to vote 'Yes' on September 18th? Dissaffection with Westminster rule, with the status quo, may explain some of the giddiness; in the voting booth, the heart will certainly determine where many put their X. But nobody should be in any doubt that however honest and heartfelt  their intention, a 'Yes' vote is a nationalist vote.

The Union is barely fifty years younger than British democracy itself and the Scots played a grand, disproportionately influential part in creating and running that democracy, which for all its faults is still the envy of the world. It's worth holding onto, worth  fighting for.

Charles Maclean is a co-founder of the Ecologist magazine. In the 1980s he wrote a column from New York for the Evening Standard. He is an associate editor of Travel & Leisure magazine and produces  the occasional  novel  when diplomatic duties allow.  Recently he was appointed honorary consul for Montenegro in Scotland.