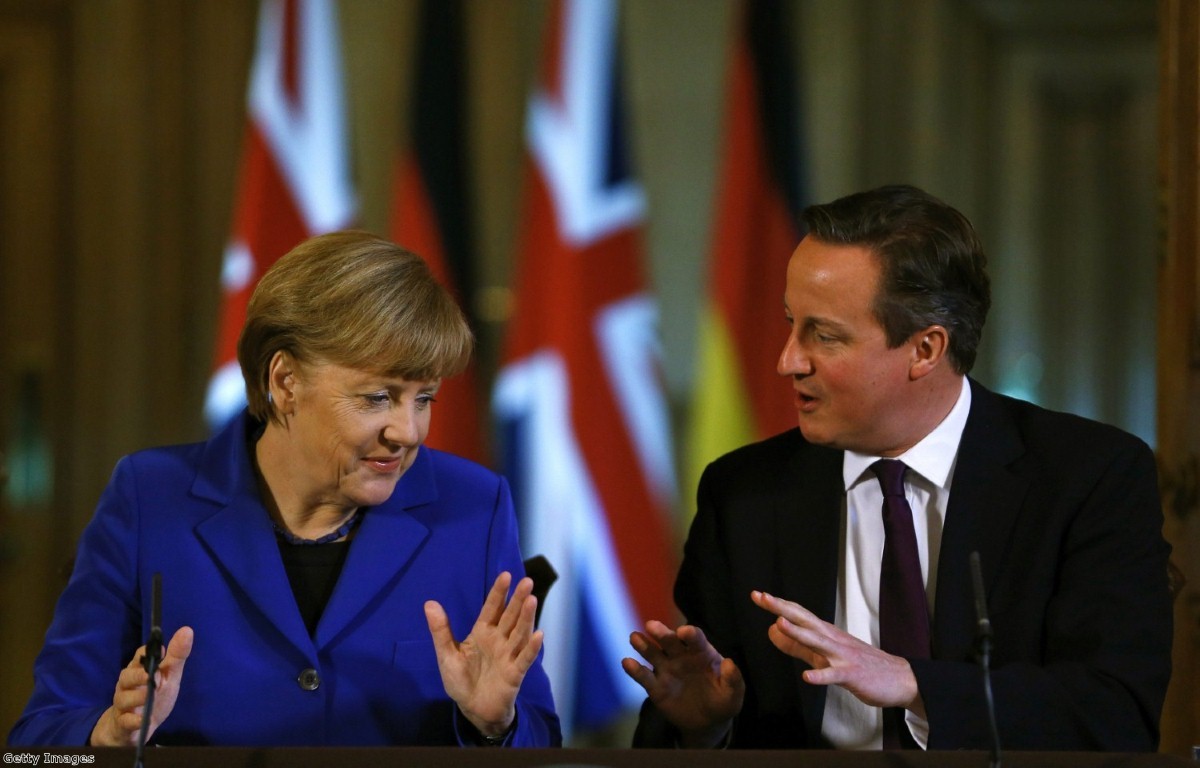 There's an element of Greek tragedy to David Cameron's slow-motion European car crash. After all, part of the reason he is unable to placate his right-wing backbenchers is because he tried so hard to please them in the first place.

When he became Tory leader, one of Cameron's first moves was to pull out the centre-right European People's party grouping and set up shop with a bunch of lunatic European proto-fascists in Strasbourg. The proto-fascists were apparently more to his party's liking.

This week, the repercussions of that move came back to haunt him. Cameron had invited Angela Merkel over for the full England treatment – tea with the Queen, an address to both houses of parliament and a photo-opportunity on the sofa in front of his DVD collection. The PM needs the German chancellor to grant him key concessions to sell the idea that he has secured reforms to Britain's relationship with the EU. Quite what those concessions are, we still don't know. It is very likely even he does not know.

She was not minded to grant his requests. That's the problem with playing all your cards as far away from your chest as possible. Once the other negotiating team sees them, they may secure an advantage. She made some kind noises, but Merkel was not exactly sympathetic. After all, that was her centre-right grouping he pulled out of.

Mercifully for the prime minister, he was doing somewhat better in the battle for Scotland, although his Cabinet meeting north of the border contrasted rather ineffectively with the more open town-hall format adopted by the Scottish Cabinet.

The blows traded over North Sea oil had little effect, but Cameron was bolstered by a steady stream of good news from elsewhere. The polls showed a boost for the 'no' camp, Standard Life became the first major employer to say it might move its operations into England and there was further doubt about what Scotland would use for currency in the event of independence. By the end of the week, Salmond was openly talking about what he would do if Scotland votes 'no'.

Meanwhile, Cameron was positioning himself for 2015 with renewed gusto – a move which will have been given emphasis by Nigel Farage's announcement that he was aiming to be deputy prime minister come the next general election. The man has chutzpah. After all, he currently has a grand total of zero MPs.

The Tories rebranded themselves the 'Worker's Party', which caused considerable mirth online. The idea is to get rid of the Bullingdon club image and trade it for a bit of white van/Clapham omnibus. It will need more than that, although at least it was a move in a more electorally beneficial direction.

His other move was less wise. Someone somewhere in Tory HQ decided to tell the press that the Tories wouldn't go into coalition in 2015 whatever happened. It was a daft statement, firstly because they would and secondly because saying so suggests they believe the government they have been in for the last four years is not worth defending.

It was a terrible idea. So it will come as no surprise that similar proposals emerged from Labour's ranks.

Of course, the Labour leader had problems of his own given that the Mail – with the Sun and the Telegraph snapping at its heels – had spent the entire week plastering the name of his party next to the word 'paedophile'.

Low tactics? Yes. Baseless, grotesque slur masquerading as investigative journalism? Absolutely. Expect much more of this in the next year and a half.