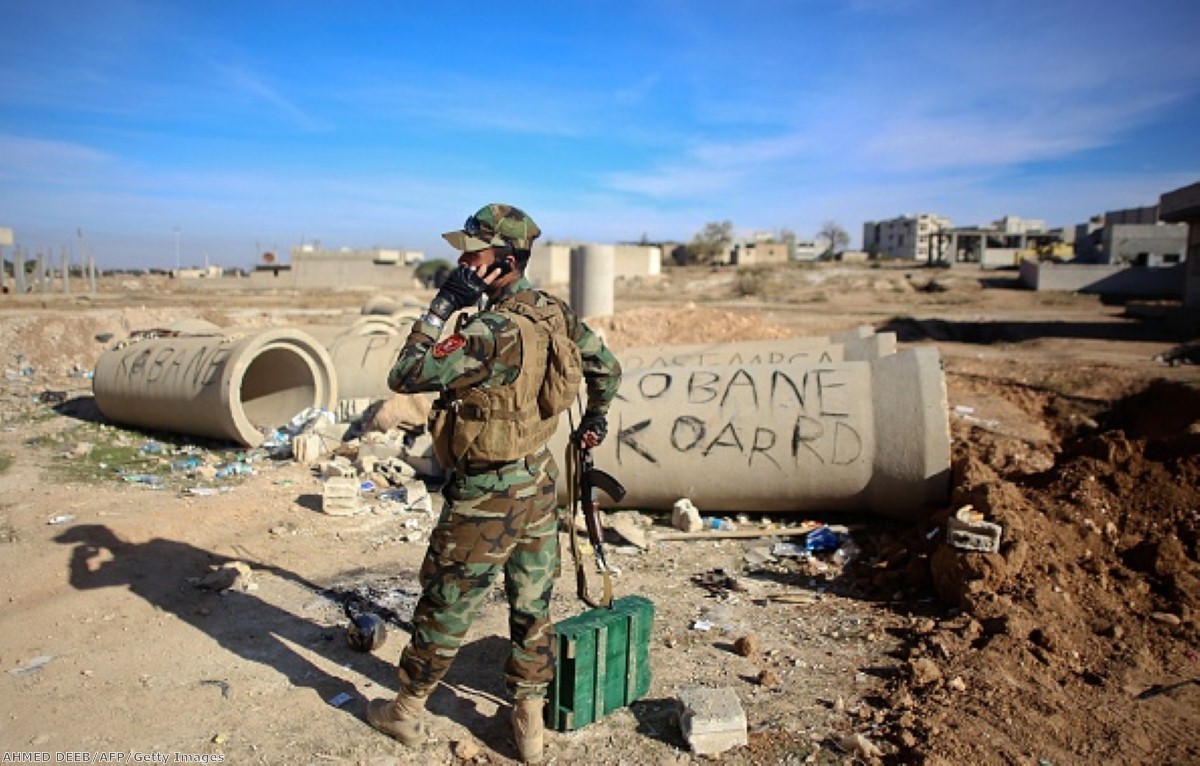 Comment: Is it time to partition Syria and Iraq?

David Cameron's dormant plans to expand British bombing to Syria have been jolted back into life by the Paris attacks, but he faces the same problems he had before – namely, a small group of rebellious Tories and the implacable resistance of Jeremy Corbyn.

The Labour leader insists that "bombing solves nothing" and wants no further action without a wider peace plan. Morally, he's wrong. Just ask the Kurds, whose secular and relatively democratic statelets would have been overrun if it wasn't for Western airpower. Yet Corbyn is correct to say that a broader strategy is needed to end the conflict, and right to insist that all parties save Isis must be brought to the table. What he may not have realised is that this strategy quickly takes us to some very difficult moral areas, such as the partition – or at least segregation – of Syria and Iraq along ethno-religious lines.

The most significant barrier to a long-term solution is the same in both Syria and Iraq: the collapse of national integrity and even secular nationalism itself. Both states have fragmented along largely ethno-religious lines (not tribal lines, as is sometimes claimed). Underlying this is the growing civil war in Islam between the Saudi-led Sunni and the Iranian-led Shia sects.

Until recently, the West pursued a two-pronged strategy in Syria. First, it supported a 'moderate' opposition against both Assad and Isis. Unfortunately, the Free Syrian Army has been losing ground, and its constituent groups are often little better than Isis. The second aspect of the strategy has been to support the Kurds. This has been successful beyond hope, but the Syrian conflict cannot be ended by Kurds alone. In Iraq, the West has also successfully supported the Kurds, as well as propping up the Shia-dominated central government. But here too there is a distinct lack of Sunni Arab partners on the ground. The government is regarded as corrupt and sectarian, stoking Sunni fears of their new rulers.

But despite the fragmentation, the West continues to aim to impose central government on these broken states. We can't help ourselves – we've been obsessed with state integrity since the Second World War. The idea that state borders should follow ethno-national lines understandably fell out of fashion during that conflict.

Even now, it is difficult for us to contemplate. Russia, the Western coalition, Turkey and Iran all refuse to contemplate partition. This is partly due to self-interest.  Turkey and Iran worry about the impact on their own Kurdish minorities. Turkey is also concerned that autonomy for the Alawites of north-west Syria would have consequences for their own Alawite minority.

Yet the refusal to contemplate partition is also an ideological failure. The West would prefer to impose unity on Syria and Iraq, even if that means prolonging civil war or creating a failed state. Of course this is partly for noble reasons – in principle segregation is morally distasteful – but it is also a moral high-handedness in the face of reality.

Given the opposition from Iraq and Syria's neighbours, is segregation without full state partition possible? Some leading experts on nationalism and ethnicity, such as Eric Kaufmann, Professor of politics at Birkbeck College, argues that the ethnic 'cantons' already carved out in Syria and Iraq should be given full autonomy under the umbrellas of decentralised Syrian and Iraqi confederations. Kaufmann argues:

"When a country has been rent by violent conflict along ethno-sectarian lines, the first imperative is to divide the combatants into safe and defensible political units under their own democratic governance. Inter-ethnic mixing and liberal nationhood is a nice-to-have, and should only arrive when populations are secure and ready to yield power to the centre."

The situation in Syria and Iraq is a mess and trying to construct a solution is like playing four-dimensional chess. The Sunni majority in central and eastern Syria does not wish to see the Alawite dictatorship of Assad restored. Similarly, the Sunni-majority areas of central and western Iraq balk at Shia-dominated central power being reimposed by Iranian-sponsored militias. Much of Isis' support in the region stems from this problem.

The Alawites and other minorities of western Syria will only accept the departure of Assad if their autonomy from Syria's Sunni majority is guaranteed. The Kurds of Iraq have long had autonomy and now occupy most of the territory that they regard as theirs. Perhaps the biggest surprise of the last few years has been the huge success of the Syrian Kurds, a once-forgotten people who have now carved out their own statelet along the Turkish border, isolating Isis in the process.

Any attempt to defeat Isis and restore centralised state control in Iraq and Syria by supporting one ethnic group against another will fail. The Kurds are not interested in advancing into Arab lands. Even if Isis-occupied Sunni territory can be recaptured by Shiite or Alawite militias (which, in Syria, include Hezbollah) this will be a temporary subjugation,and regarded as a defeat by the Saudi-led Sunni states.

So what should Western policy be? In the short term, air support should continue to be given to the Syrian & Iraqi Kurds and the Iraqi Shia in order that they can defend their territory against Isis. But in order to end the conflict, the strategy must be bolder. The full autonomy of the Kurdish regions of Syria and Iraq must be given international guarantee so they can feel confident remaining within those states. Similarly, the Sunni Arab regions must be promised full autonomy so that they'll be willing to turn against Isis. Western Syria, with its complex patchwork of Alawite, Shia, Sunni, Druze and Christian populations, must also be given autonomy as a guarantee against Sunni domination. Only with that protection will they abandon Assad.

There are no simple solutions to complex problems. Formal segregation would bring its own difficulties, not least the potential for further displacement of people. Several cities, including Baghdad and Damascus, are ethnically mixed. But the reality on the ground is that ethnic cleansing has already happened on a large scale, and de facto segregation already exists. Formalising that segregation is now the only possible basis of a general peace, a peace which would be an enormous contribution towards ending the wider Sunni-Shia conflict in the Middle East.

Ben Myring is a policy officer with a specialist interest in Kurdish history and politics.