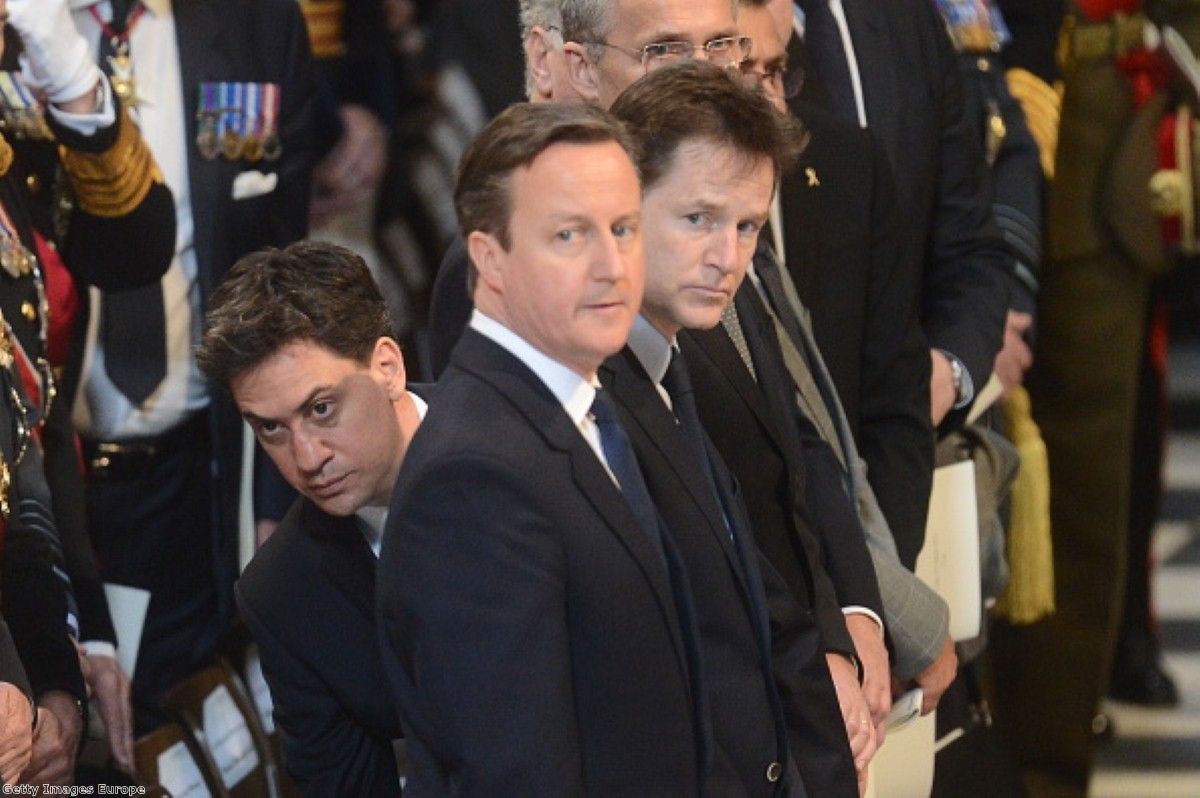 UK political parties have so far spent millions of pounds and trod on thousands of doorsteps during this general election campaign.

It has had zero effect. Apparent crossover points in the polls have risen like mirages only to fade back into the dust.

The latest average poll-of-polls reveal that there has been no significant movement in votes since the start of January. Basically nothing is happening, nobody is listening and nothing has changed.

General election latest. Basically nothing has changed since the start of January (via @telegraph) pic.twitter.com/WRO6FSOnLJ

There seem to be several reasons for this.

1) The decline of the press

There has been a collapse in newspaper readership over the past ten years. Much of that readership has gone online, but much more has simply gone elsewhere. The British press' ability to sway opinion and swing elections has therefore drastically reduced, if indeed it ever really existed in the first place.

2) Voter trust in politicians is at an all-time low

The view that politicians are "all the same" has become so ingrained in British culture now that it is hard to remember a time when it was ever different. The expenses scandal is often credited as the cause for this collapse but it is actually a development which has been coming for decades. The ability for politicians to dramatically change public opinion just by making election pledges has therefore reduced. Voters appear to make up their minds over long periods and with startlingly little variation. The current election campaign has done little to change this. While the public worry about housing, jobs and healthcare, our politicians obsess over debates, coalitions, buses and kitchens. While politicians still have the power to change minds it is not a power which they seem very adept at using.

3) The rise of smaller parties

The decline and fall of the two main parties in British politics (via the Telegraph). pic.twitter.com/LLEVhLbFSL

In previous general elections, voters unhappy with the governing party would either shift their vote to the leading opposition or to the Lib Dems. This simply hasn't happened this time. Since 2010 there has been very little direct movement between Conservative and Labour voters. The rise in Labour's vote following 2010 was mostly caused by collapse of the Lib Dems. Labour's more recent decline has been largely due to the rise in the SNP, Greens and Ukip rather than any traditional swing back to the Conservatives. Likewise the more long-term collapse in the Conservative vote has overwhelmingly been due to the rise in Ukip and other minor parties rather than any switchover to Labour. Assumptions about pre-election "voter swing back" are therefore deeply flawed.

If the polls do move in the next two months, it is unlikely to be a straightforward Labour-Conservative or Conservative-Labour switchover but a far more complex churn of votes. It's possible that this complex churn is already happening, but that we just can't see it in the polls. It's also possible that those voters who have deserted the two big parties for the smaller parties are there to stay. As the chart above shows, support for the two main parties has been in long-term and historic decline.

Osborne's last throw of the dice

But just because very little has changed in the past few months does not mean that nothing will change in the next two. For every 99 political events which are ignored by the public, there is one which genuinely makes a difference.

In recent years there have been at least two major political events that have led to significant shifts in the polls. The first was the so-called 'omnishambles' budget in 2012, which caused a collapse in support for the Conservative party from which they have never really recovered. The second was the Scottish independence referendum which caused a collapse in Labour's support north of the border and has now killed off any hopes they have of still winning an overall majority.

This week is probably the last time we are likely to see another one of these big moments before the general election. George Osborne's Budget could be his last as chancellor and it is almost certainly the Conservatives' final shot at winning the election outright. Osborne yesterday promised that there would be "no giveaways, no gimmicks" in the Budget. One thing is for sure. There will be lots of giveaways and there will be lots of gimmicks. This is the Budget Osborne has waited his entire political career to make and he is not likely to pass up the opportunity.

We can expect even more giveaways to pensioners, the last voting group which can be relied on to vote for the Conservatives. We can also expect further tax cuts for low and middle earners, in an attempt to create a 'feel good' factor in the run up to the election. There will also likely be a further cut to beer duty and motorists are likely to be given some form of handout as well. Much-promised cuts to inheritance tax are possible but probably more likely to be left to the Tory manifesto and there will almost certainly be at least one big announcement which has not yet been briefed to the press.

Will any of it make a difference? The recent economic recovery has reduced voters' concern with the economy, with many now more interested in issues like the NHS and immigration instead. However, the economy is still a massive issue and is likely to be a decisive factor in swinging undecided voters. Opinion polls have shown that there are more undecided voters now than there have been at this point in previous elections. If Osborne is canny then he should be able to do something to grab at least some of these.

Of course it's always possible that he will make another major error. His decision to cut the top rate of tax in 2012 was a catastrophic strategic mistake which reinforced damaging public perceptions of the Tories as the party of the rich. It's still possible that he will do something similar again.

Either way, this week's Budget looks set to be the first big moment of the 2015 general election campaign. So far voters simply haven't been paying much attention to what politicians have said or done. This could be the week that finally changes.