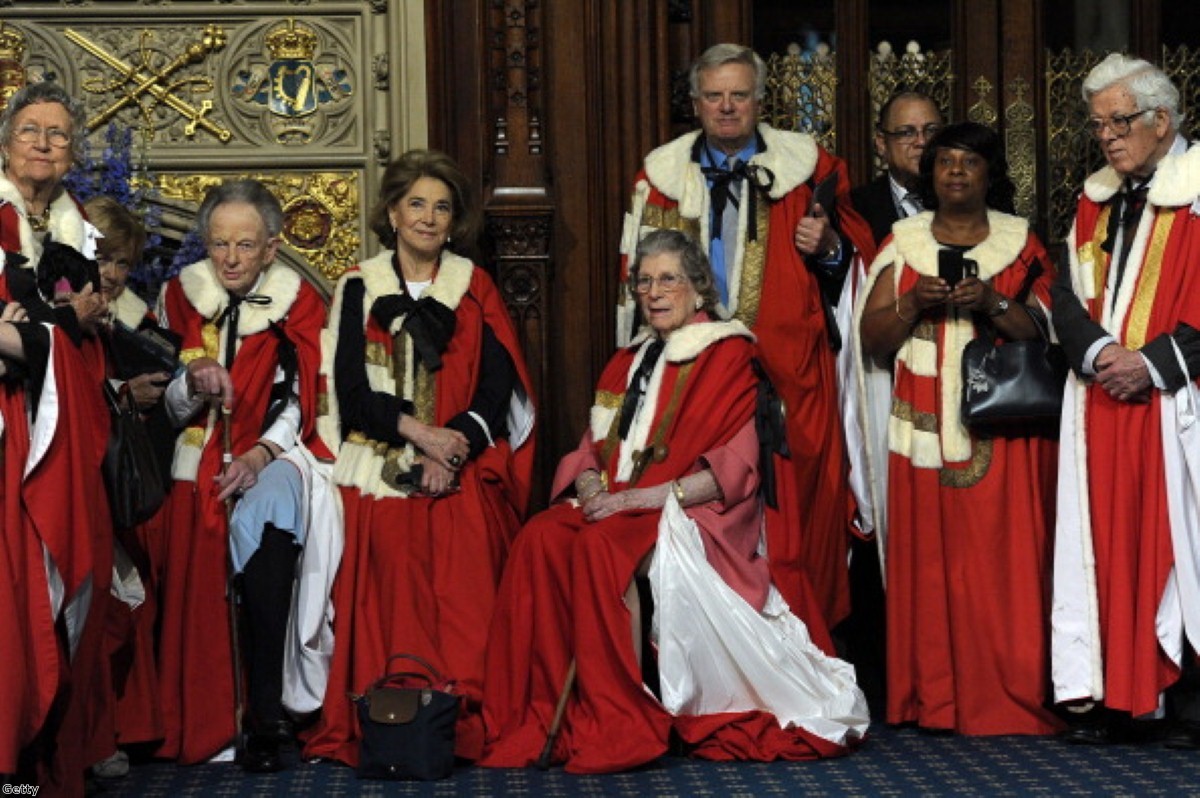 Lord Grade reveals vanishing gap between Tories and the press

As the general election inches closer, the distinction between certain sections of the press and the Conservatives' in-house media operation is becoming increasingly hard to discern.

Take this double-page spread in today's Sun. Ignore for a moment the obvious sexism and anti-Scottish sentiment and just take a second to admire quite how closely the imagery and message chimes with the Tories' current campaign.

Nicola Sturgeon is depicted astride a wrecking ball painted with the Scottish flag. Several headlines urge readers to be "fearful" of an alliance between the SNP and Labour which would destroy the economy and "ruin Britain." If that wasn't clear enough, there are not one but two Conservative posters included on the page.

If the two pages were folded-up and posted through your letter box, you would assume it was a Conservative leaflet, even if you might subsequently feel the party had gone a bit too far.

And yet far from being an extreme example, this is actually a fairly typical demonstration of the approach the paper has taken in recent months. As the election has drawn closer, any pretence that the Sun is independent from the Conservative party press operation has winnowed away to nothing.

Turn next to the story on the front page of today's Times. The paper highlights a letter sent by former BBC chief Lord Grade, urging the corporation to "stop playing politics over the TV debates."

"The former BBC chairman Lord Grade of Yarmouth has launched a blistering attack on "bullying" broadcasters for "playing politics" in threatening to hold television election debates without David Cameron," reports the paper.

For some reason, Grade's own attempts to play politics as a Conservative peer sitting in the House of Lords are left to a brief mention in paragraph six of the story.

Interviewed on the Today programme this morning, the Tory peer went on to accuse the BBC of seeking to "interfere in the outcome" of the election before calling for the debates to be cancelled.

"If you can't achieve impartiality you can't have the debates."

Grade's own attempts to interfere in the election outcome went unmentioned by the programme, however his intentions could not be clearer.

Long before Grade admitted his membership of the Conservative party, Grade had a record of defending Tory politicians. While head of Channel Four, Grade interfered to block broadcast of an episode of the satirical programme Brass Eye, in which Conservative ministers were tricked into campaigning against the made-up drug 'cake'.

Grade later claimed he had delayed broadcast of the segment because he was worried that the programme would "breach the rules on taste and standards." Clearly, allowing Conservative politicians to look silly on television, was too distasteful for Grade to stomach.

Morris's response to this delay is now the stuff of legend, however the row did not seem to damage Grade's standing and he subsequently went on to chair the BBC and ITV before being made a Tory peer by David Cameron.

The revolving door between the Conservative party and sections of the media is long established. And of course it is no great surprise that Conservative-supporting newspapers should repeat Conservative talking-points. The last remaining Labour-supporting paper, the Daily Mirror, is often equally orthodox in its support for Miliband's party.

But with the current election set to be the closest for decades, the volume of this tribal loyalty in the press is growing increasingly loud and increasingly shrill.

Those seeking independent coverage of the coming election would be well-advised to look elsewhere.