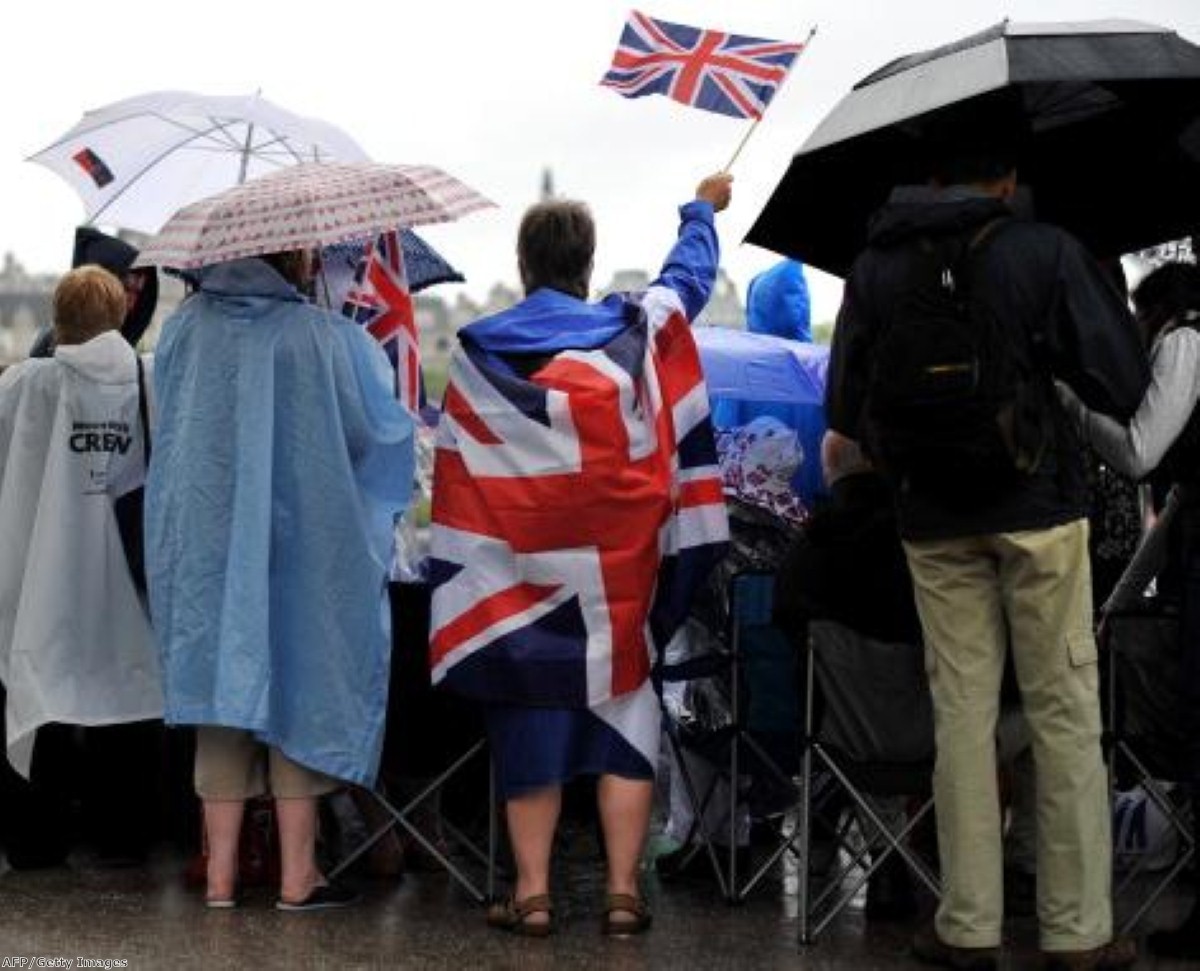 Why the Diamond Jubilee suits a wet weekend

How appropriate it is that this weekend's Diamond Jubilee celebrations are something of a damp squib – a very fair reflection of our attitudes to the monarchy question.

The problem with politics always comes down to its ability to change things. So the problem with the question of the monarchy's future is that, like all constitutional reforms, those looking for change are playing a very long game. For all the nation's joy at a double bank holiday, it is apathy which really rules the day.

Hundreds of boats making their way along the rainy Thames are there to celebrate the longevity of a monarch whose commitment to duty is at the very least laudable. But not all are so convinced. The Republic organisation, for example, has published a pamphlet on Elizabeth II's 60 Inglorious Years.

"No one can actually remember any notable achievement or event she's been involved in, or speech she's made," says its chief executive Graham Smith, who is leading a small protest near City Hall in the rain.

"She's abdicated all her constitutional responsibilities. She's kept the perks without wanting to do the job."

There is a fundamental clash between this approach, that the Queen has a real political job to do, and those of monarchists.

Any constitutional textbook will tell you that the Queen is valuable because she is above politics. She is a rallying point around which everyone, regardless of their political identity, can unite.

That's why she is so "crucial" for the armed forces, says Conservative MP Michael Ellis. "She represents constancy, tradition, service, public duty and integrity," he says. His bid to get MPs to pay for a new stained glass window for the Palace of Westminster out of their own pockets succeeded because of exactly this cross-party desire to honour the monarch.

Republic believes the head of state should play a more active role, even if that is completely separate from that of the head of government – ie, the prime minister.

The Irish president, for example, doesn't get involved in running the country, but will intervene if there's a hung parliament or other constitutional headache, or if the government attempts to pass legislation which clashes with the constitution.

Smith understands that the Queen, who is unaccountable, isn't particularly keen on getting involved with these issues. She can't. Her hands are tied. The solution, then, is to create the accountability by holding elections for the post.

His answer to the problem is very simple. Pass legislation setting up a referendum. When that's won, hold the first elections for the first head of state. "The crown would be passed to the people, and the Windsor family would be private citizens free to spend their days skiing in Switzerland."

"I think an elected president would be disastrous," he says. "I don't particularly want President Blair, thank you very much!"

Ellis believes the weaknesses of the present system as identified by Smith are actually real advantages. Where else could a head of state have such extraordinary experience? She has, after all, met all of the US presidents since Eisenhower.

"There are few countries anywhere in the world that are not envious of our system," he says. "It's a perfect balance between the ceremonial and the influential. It's proven to have worked well, and I think it's a system we should stick with."

Sticking with the status quo is obviously the most likely scenario for the coming years. Bob Morris, of UCL's Constitution Unit, says that Britain is broadly content with retaining the monarchy. "The polling shows very small numbers in favour of moving to a republic, whenever that is asked – which is not very often," he says.

When you look at the history books it's clear it takes massive ructions to do away with monarchies. State failure, either because it loses a war or there's a successful insurrection, or both, did away with many of Europe's monarchies in the 20th centuries. No event as momentous as this is foreseeable in the near future, so without this sort of political earthquake there's not a great deal of motivation for the public to change things.

And that's the problem, isn't it? Arguments about the relative merits of an elected president versus a hereditary constitutional monarch feel a little flat when the prospects for any meaningful change are at least decades away.

The republican agenda is frustrated by lack of support, partly fuelled by a lack of controversy. It is actually benefiting from the Diamond Jubilee because the event gives its cause much-needed publicity. When we're back to normal this will change, and the nation will lapse into its broad placid apathy.

This might be something to lament, as a broader reflection of Britain's political lassitude. The alternative is that the public just don't care that much either way.

This latter means the excitement of this weekend feels a little artificial, a little overdone. In that context a wetter, duller, less animated set of celebrations seems just about right.