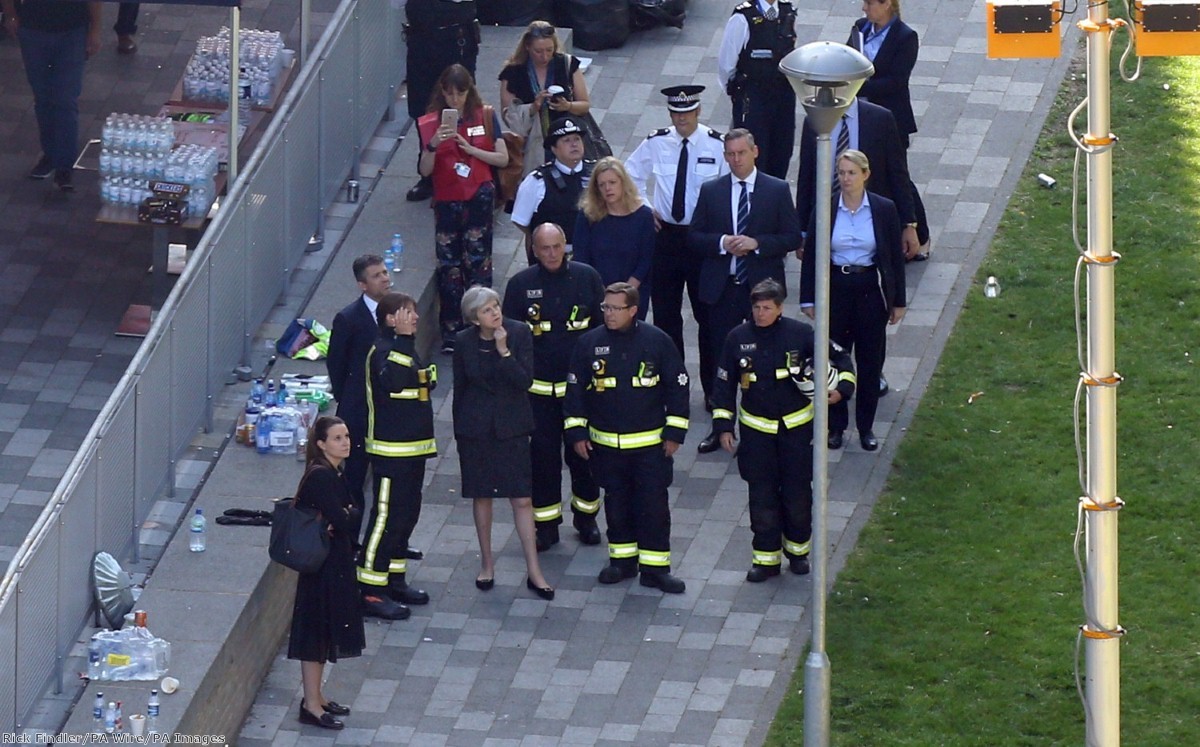 Week in review: Grenfell could break the back of the Tories

The party politics of Grenfell may not always be as clear-cut as they currently appear. When journalists start really researching the decisions taken on tower blocks, they will likely find that many Labour councils – especially in rapidly-gentrifying London boroughs – made questionable calls too. But just days after the tragedy, it is already clear that this could potentially break the back of a weakened, chastened, minority-government Tory party.

To some commentators, the mishandling of Theresa May's visit might seem superficial. Some will say that the real meat of the issue is about the policy causes and implications of the fire. Her refusal to talk to residents – the fact she appeared so cold and indifferent and plainly unlikeable – should be secondary. But we're kidding ourselves if we think politics is conducted in that way. Her basic inability to show any normal degree of human empathy is a public relations disaster for the Conservatives.

It would remain just that – a PR issue – if her presentational failings weren't replicated so uncannily in her politics. I first started covering May in a sustained way in 2013, over the Isa Muazu case. He was an asylum seeker who said he was fleeing Boko Haram. His application was rejected and he went on hunger strike. After going without food for 90 days, he was visited by independent doctors who advised that he was too unwell to be deported. May's Home Office put him on an 'end of life' plan and arranged the deportation.

This was the type of behaviour we always saw at the Home Office. Cold, inhumane, bureaucratic, a Kafkaesque nightmare. It was like that before May arrived, got marginally worse while she was there, and remains in the same state now. But when she left, she brought that judgement and that manner to Downing Street. She is the Home Office prime minister. This is how she acts.

That's the type of mentality behind not offering European citizens in the UK assurances about their status. It's the type of mentality behind staring like a stone whenever she meets the European leaders. Many politicians have very distinct personalities and politics. Lots of right-wing critics of welfare are extremely warm and generous in real life, while socialists are often mean-spirited and disdainful. But in May's case, her personality and her politics seem identical.

Then there's the lies. Defence minister Tobias Ellwood told Question Time that "security concerns" have stopped May meeting residents. If so, the security services are clearly happy to sacrifice the life of the Queen, who arrived at a relief centre this morning and spoke with residents. Cold indifference, presentational catastrophe, and lies: that is what the Tories have offered so far.

Jeremy Corbyn took a different approach. He went to the tower. The images of him embracing residents seemed warm and natural and completely genuine. It was telling too that they welcomed him, in a way they most certainly would not have done for May. Even Labour mayor Sadiq Khan had a rough ride. But not Corbyn.

Again, it's not just symbolism. Corbyn's core message is of grotesque inequality under a rigged economic system designed for the rich. The fire seemed to reflect these ideas in the most horrific way imaginable, like the final scene of an Arthur Miller play: The rumours of cheap materials being used when more expensive varieties would have halted the spread of the flames, the fact it is in Kensington, where the gap between rich and poor is more obvious than perhaps anywhere in the country, the way the tower is right in front of the luxurious developments which increasingly fill the London landscape.

Emotions are high and politics, as we've seen over the last few weeks, can change suddenly. But this story has the capacity to break the back of the Tory party. It is currently trying to stitch together exactly the sort of shady back-stage deal it warned voters about if other parties tried it. Then it will enter Brexit talks it does not understand and cannot deliver on against an opponent which is much better prepared and organised. It has no reliable majority and is half-suffocated under the weight of its own electoral hubris. In that type of scenario, events – "events, dear boy, events" – like Grenfell can ruin you. There is every chance they will do so here.