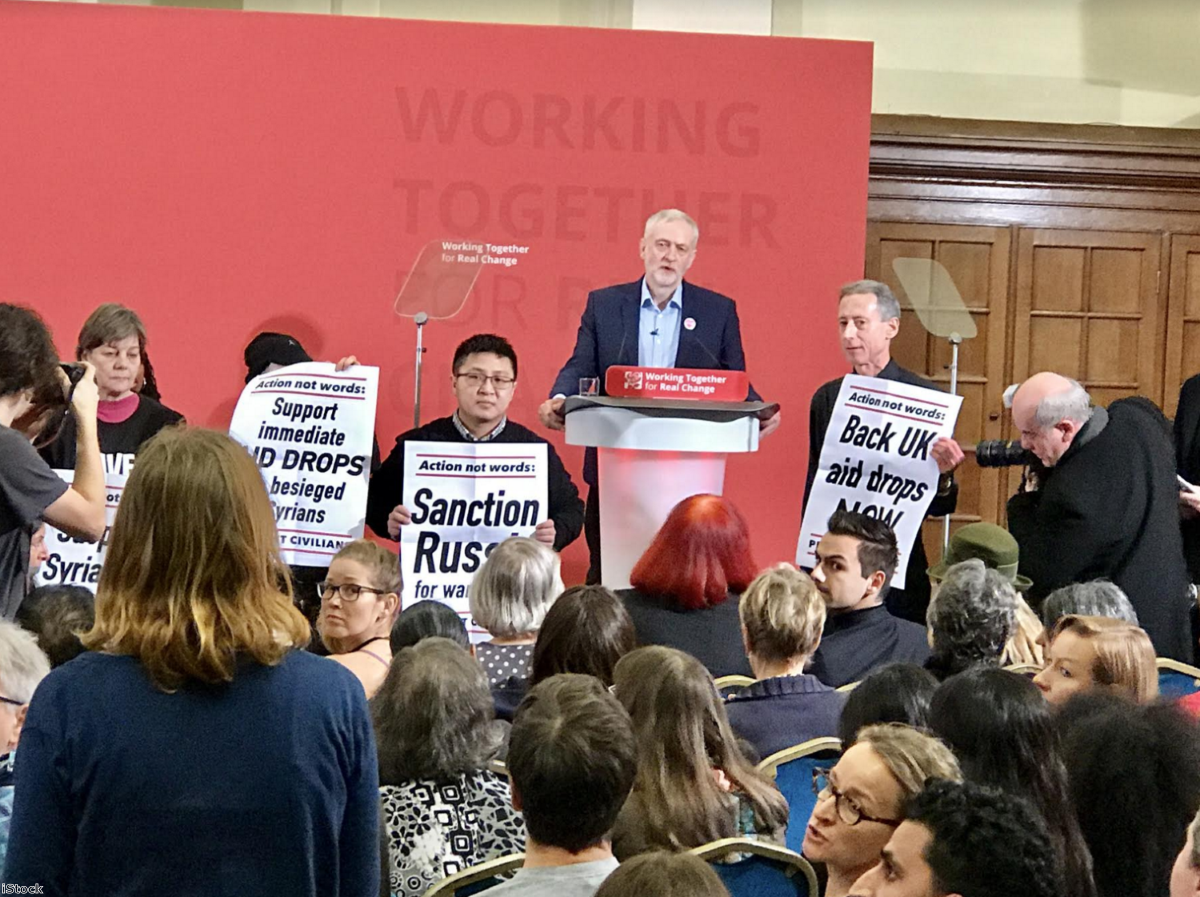 The truth about Syria, Corbyn and our protest

The critics of our protest against Jeremy Corbyn on Human Rights Day have misunderstood and misrepresented what it was about, why we did it, who organised it and what its consequences were. Typical of this failing is Louise Raw's searing critique.

I have great respect for Louise but she appears to have no knowledge of the background to our intervention; presenting an idealised version of Jeremy Corbyn's and Labour's stand on Syria, which is different from the reality we know.

Moreover, she attacks me, despite the protest being organised and attended by members of Syria Solidarity UK. Her broadside doesn't even mention them. She writes them out of the story as if they don't exist and were not there.

It is simply not true that Jeremy and Labour have an exemplary record on Syria. This was evident in his speech on Human Rights Day, when we did our protest.

Jeremy explicitly accused Saudi Arabia of crimes against humanity in Yemen and cited the scale of the suffering it has caused. When he spoke about Syria he did not name the leaders who human rights organisations say are responsible for the overwhelming majority civilian deaths, Presidents Assad and Putin. Nor did he say they were guilty of crimes against humanity or mention the scale of human suffering, which is far greater compared to Yemen. This smacks of double standards.

It is part of a pattern. When asked to condemn the terror bombing by Russia and the Syrian regime Jeremy frequently resorts to the stock line: "We condemn all bombing." This is a bit like someone insultingly responding to the Black Lives Matter movement by saying "All lives matter." He too often invisibilises what many people regard as the outrageous war crimes of Putin and Assad.

Contrary to what my critics claim, Jeremy and Labour have poor form on Syria.

Democratic Syrians have for years pleaded for peaceful initiatives: UN-mandated no-bomb zones, civilian safe havens, humanitarian corridors, peacekeepers and human rights monitors. But they were ignored and dismissed, including by Labour and the Stop the War Coalition, as well as by the Conservative government.

David Cameron and Theresa May – who had the power to enact these peaceful initiatives – did nothing. They offered only tears and sympathy.

Jeremy Corbyn and Labour did the same: words but no action.

Labour has, from time to time, condemned Assad and his Russian imperialist allies but mostly only when pushed and even then rather vaguely and mutedly. I cannot recall them ever speaking out against the military intervention by Iran and Hezbollah (whose extreme Islamist ideology is not dissimilar to that of ISIS).

Most damningly, despite Jo Cox's urging, the Labour leadership did not demand parliamentary time for a debate and vote to mandate UK humanitarian aid drops to besieged civilian populations. They failed to press the government to agree a vote to authorise those drops of aid.

What's more, Labour has, to my knowledge, never organised even one event in solidarity with Syrian democrats, socialists and civil society activists, as it used to do for people fighting the apartheid and Pinochet tyrannies. Nor did it support any of the UK rallies in solidarity with the Syrian movements for peace, democracy and human rights. It failed to advocate the passage of Canada's UN Syria resolution under 377A – Uniting for Peace – which called for the immediate cessation of hostilities, humanitarian aid access and an end to all sieges.

Faced with all these shortcomings, we had to protest Jeremy and Labour – in support of the five million civilians besieged in Aleppo and other cities, towns and villages. We acted at the behest of, and in support of, civilians whose cry for help is being ignored by both the government and the opposition.

What did we do that was so terrible, according to some Corbyn supporters?

Six of us walked to the front of the room as Jeremy spoke and stood below him with placards saying: "Action not words: Back UK aid drops now. Protect civilians."

Our goal was to push Labour to actively campaign for a parliamentary vote on humanitarian aid drops and for sanctions and war crimes charges against the Assad and Putin regimes. We also wanted the party to publicly demand UN-supervised evacuations of civilians and White Helmet rescue teams to safe havens, and for Syria to be suspended from the UN until it agrees to a ceasefire and stops blocking aid deliveries. Neither Labour nor Jeremy have been actively campaigning for any of these initiatives.

During the protest, we questioned why Jeremy Corbyn had not pressed for a parliamentary debate and vote to authorise UK aid drops of food and medicine to besieged civilians in Aleppo and elsewhere. He did not give a commitment to do that when I raised this proposal at the protest.

The question we had is this: Why isn't Jeremy holding the government to account for its inaction on aid drops, and publicly demanding that it agree to a vote in parliament to air drop humanitarian aid?

If he had responded to our call by promising to go to parliament to press the Conservatives to agree those initiatives, he would have turned the protest to his advantage and won positive media coverage and huge public sympathy. We created an opportunity for Jeremy to show real leadership on Syria and to wrong-foot Theresa May and Boris Johnson over their inaction. Sadly, he ducked it.

Our protest was polite and lasted five minutes. Jeremy was briefly delayed but not stopped from speaking. He addressed all the issues he originally planned to speak on.

Contrary to what is now being claimed, his speech was not primarily about women’s rights and was not billed as such. Only a third of his speech covered that issue. It should have been more, in my opinion, but what he said was good and I applaud him for saying it.

Although our critics say that our protest sabotaged women's rights, we were acting in defence of Syrian women and their children who have suffered so much under the terror bombardments of Putin and Assad.

So what did our protest achieve? It put the issue of aid drops on the public agenda and was appreciated by Syrians in Aleppo and the diaspora. We added to other lobbying for a Syria debate in parliament, which did happen four days later. But when it took place, Labour again failed to press for a vote to mandate UK aid drops.

To his credit, Jeremy thanked us for raising the issue of Syria. But some of his supporters were not so gracious. They deluged me – not the protest organisers, Syria Solidarity UK – with thousands of often abusive, obscene and threatening messages. They seem to think that Labour should be above criticism and should not answer for its shortcomings on Syria.

These critics said we aided the Tories and the right-wing media. This was never our intention. Syria Solidarity UK and I felt that we had a duty to support Syrian civilians by calling for UK aid drops and pressuring Labour to actively push for them in parliament. We had to do what is right. Jeremy and Labour could have avoided our protest and the subsequent media coverage if they had actively campaigned for aid drops. They didn't.

I have worked with and supported Jeremy for over 30 years and will continue to do so. I backed him for Labour leader and often defend him privately and publicly. I share his quest for a fairer, more equal and just society. I want him to work with the Greens, Plaid Cymru, SNP, Lib Dems and SDLP to create a Progressive Alliance to win the next election.

Jeremy and I disagree on Syria but we agree on many issues and are still friends. If he is okay with a disagreement between friends, I hope his supporters can be too.

Peter Tatchell is director of the Peter Tatchell Foundation. To find out more about human rights campaigns, to receive his email bulletins or to make a donation visit www.PeterTatchellFoundation.org. Syria Solidarity UK is a grassroots solidarity group of Syrian & UK activists.