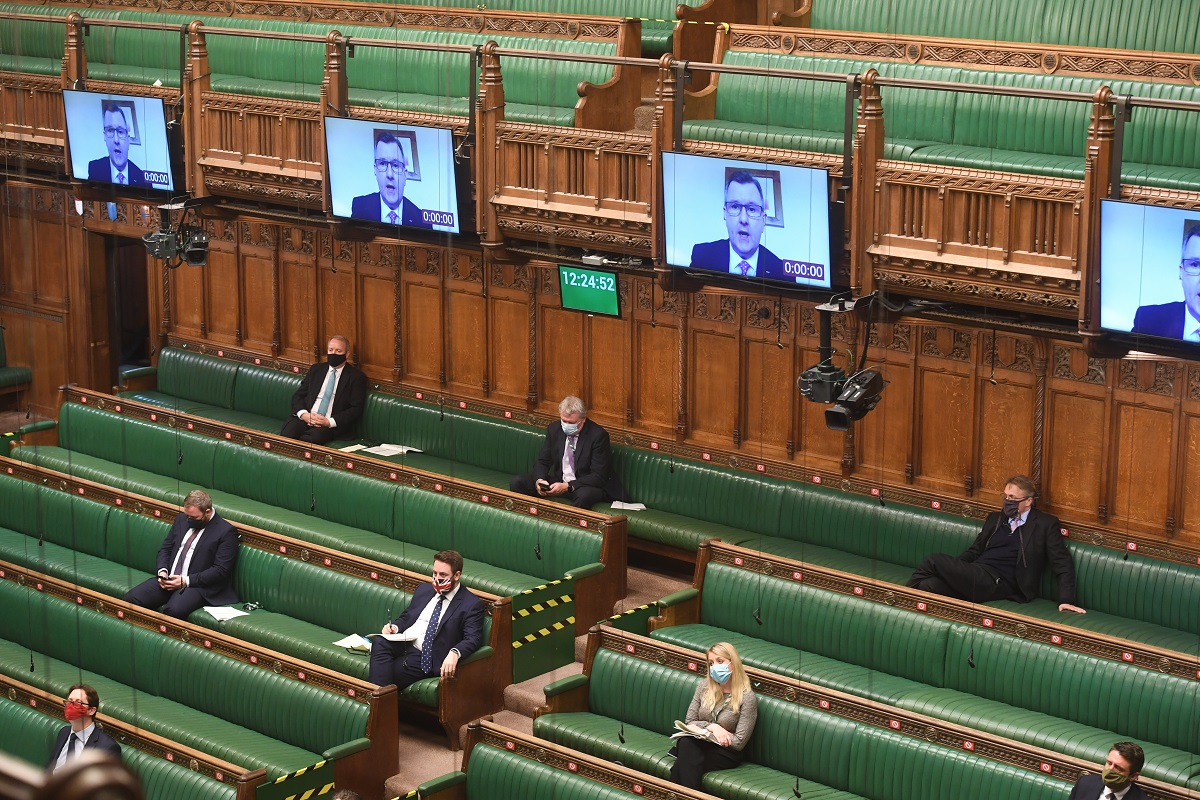 Is oratory virtually dead? The House in lockdown

The House of Commons is a curious bearpit of a place. In quiet times, with only a handful of Members present for humdrum business, it can be a lifeless arena with a feeling of scripts being read out without much gusto. But for set-piece occasions, like PMQs or a Budget statement, it is a raw, savage arena, the air crackling with energy as MPs crowd into a surprisingly small space, sitting on the floor or crushed against walls, to take part in the blood sport of British democracy.

Virtual proceedings, allowing MPs to participate in debates from the comfort of their homes or offices, have changed the mood entirely. The old atmosphere is utterly absent—no braying crowds or booing mobs—and oratory that before would have set the chamber ablaze can fall utterly flat, fail to impress or even seem absurd and parodical.

It is important to recognise that the Commons is not universally admired for its sometimes-theatrical style. While American audiences can be rapt by the tempo and emotion of proceedings (Congress is very different, and the Senate is an especially somnolent body), there is a section of informed observers who lament the lack of content and serious purpose. Prime Minister’s Questions, they argue, solicit little information, are peppered with obvious set-ups and get drowned out by schoolyard taunts and shouts.

There is much truth in that. PMQs are a thing apart, a kind of career-long initiation ceremony both for premiers and opposition leaders, and what is reported is not the content of the answers but a more subjective sense of who “won”, who landed sharp, television-friendly partisan blows and who was left hesitant and defensive.

It is a run-what-ya-brung affair: Tony Blair, master of the soundbite but not particularly effective as a debater, relied on the mass of Labour MPs behind him to crush the opposition; Harold Wilson, despite a superficial everyman geniality, knew very well how to handle a stiletto, almost leaning across the despatch box to slip it between the ribs; while David Cameron in his early days played on the sheen of youth and optimism to contrast himself to the tired-looking Labour leaders he faced. One of the most effective lines I have seen, because it was witty, almost glib, but contained a bomb of truth, was his throwaway remark, facing Blair, that “he was the future once”. Ouch.

All of these observations notwithstanding, any experience of other legislatures will quickly drive home the point that the House of Commons sometimes sees drama and oratory of a reasonably high standard. When I was a teenager—yes, yes, judge away—I owned a double CD set entitled “Great Parliamentary Speeches”. Imagine a similar product from the Bundestag.

The pandemic has changed everything. After a shaky start, the House of Commons introduced “hybrid” proceedings, whereby members could take part in questions and debates remotely, their images appearing on large screens installed in the chamber specially for the purpose. The government has taken a sceptical view of remote participation, partly because the whips are conscious that their controls diminishes with physical distance, and partly because the leader of the House, Jacob Rees-Mogg, is, to put it mildly, a traditionalist by instinct. But the pressure to adapt to lockdown has proved irresistible (especially as the House of Lords has more enthusiastically embraced technological solutions), and recent proceedings have been largely virtual, with only a small proportion of MPs physically present in the chamber.

The effect on the way MPs deliver speeches has been profound. The first major sign that something had changed was a series of rather flat performances at PMQs by Boris Johnson. He is a man usually noted for his verbal dexterity and broad vocabulary, even if he does use “um” and ”errr” as punctuation and stylistic trills, while his opponent, Sir Keir Starmer QC, despite forensic legal training, can seem robotic and unexpressive. But, as Admiral Beatty observed bitterly at the Battle of Jutland, “There seems to be something wrong with our bloody ships today”. Boris had lost his touch. 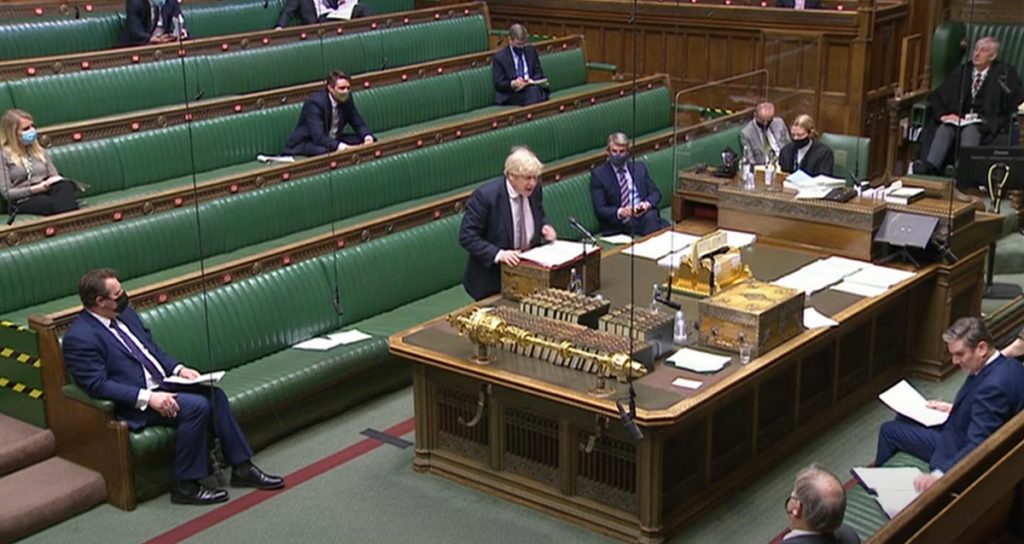 Boris Johnson’s performances at the despatch box have fallen flat since the introduction of a virtual parliament (photo: Press Association)

The answer was strikingly simple. The prime minister plays to a crowd, drawing energy from his audience as if his life depended on it. Shorn of a phalanx of cheering and hooting Conservative MPs at his back, he was exposed, unarmed. His jokes were not greeted with hearty guffaws and his witticisms drew no cheers of admiration. This was not how it was supposed to be. The bloody ships indeed.

It is not just the prime minister who has suffered. All members have taken a while to adjust to their new circumstances: it is difficult to feel like Gladstone when seated in front of a laptop in the spare room. Ian Blackford, the SNP’s Westminster leader, has created ever-more-patriotic backgrounds of tartan and football shirts, but his orotund bombast, for which the House has little patience at the best of times, seems simply absurd and laughable. He has passed through the veil into self-parody. Other MPs try to maintain the gravitas and rhetorical flair of the green benches; one senior Tory insists on standing, despite being in his own home, which is a touching consideration of the House’s dignity but not entirely necessary.

Then there is the great curse of remote working everywhere, the phrase which may come to define 2020: “You’re on mute”. MPs are not used to having control of their microphones: at international assemblies where individual mikes are the norm and the speaker presses a button to activate and deactivate them, the British delegates are often guilty of launching into a speech without amplification, or else leaving the microphone switched on after their contribution and broadcasting their quotidian conversations across the room. Modern technology adds to that risky mix a reliance on a stable internet connection, which is a disadvantage for MPs in more rural and far-flung locations.

The overall effect has been deadening. Members are beginning to learn—most of them, anyway—that grand gestures and soaring phrases will no longer convince or impress. A more conversational tone is creeping into proceedings, in some ways a complement to the jolly compering of the speaker, Sir Lindsay Hoyle. Members are introduced like contestants on Sale of the Century, or, in the case of Tory MP Bob Blackman, greeted as if he is an airline pilot coming into land (Blackman wears rather aeronautical-looking headphones, and has joined in the joke).

There is one other striking feature of the virtual proceedings. By necessity the Commons has adopted the practice of keeping a publicly available list of those who have applied to speak: this has long been standard in the House of Lords, but previously, while the speaker would have a list of those who had sought to “catch his eye”, it would be a private document, shared only between the speaker and his secretary, not available for other Members to consult.

A published list and the comparative ease of contributing virtually has led to very heavily subscribed debates (due also, no doubt, to the gravity of matters before the House in recent weeks). As anyone who has watched parliament will tell you, and simple arithmetic will suggest, the more MPs who wish to speak, the less time will be available to each MP for his or her contribution. So we have seen debates on, for example, the most recent covid lockdown regulations in which members have only three minutes to speak: not long to develop an argument or draw out a philosophical observation. For someone like Sir Charles Walker or Sir Desmond Swayne, who acknowledge the seriousness of the public health threat but also place great importance on personal liberty of action, and seek agonisingly to find a satisfactory balance between the two, 180 seconds is not really adequate.

For the foreseeable future, then, we have a House of Commons which is more conversational in style, less formal, with a more direct relationship between the MP who is speaking and the audience watching from outside Westminster. Members will become aware of this, and of its potential for connecting with a wider audience. Some will welcome it as making the House less stuffy, less theatrical, less mannered. I am not so sure.

The overarching question is: what will happen when the epidemiological threat subsides, Members can gather together physically again and the chamber fills back up? Will this “covid style” be forgotten and wither away? Or will a lasting change in temper have taken place? Remember that MPs elected in 2019 have known little else: they had been in the House for only three or four months before the pandemic hit. There are 140 of them, these newbies. Will they set the tone of a new kind of parliament, or will the old ways reassert themselves? Tradition vs modernity. The House has seen this battle before.