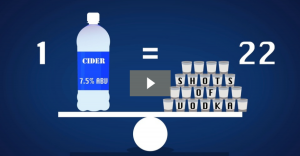 IAS – The problems of cheap, high strength alcohol from The Institute of Alcohol Studies on Vimeo.


This animation from the Institute of Alcohol Studies explains how cheap, high strength alcohol products sold at low prices, have a devastating impact on underage and dependent drinkers' health, contributing to over a million hospitalisations and 23,000 deaths each year in England alone.


Alcohol continues to be one of the leading causes of death and illness in England.


More than one million hospital admissions and 23,000 deaths each year are caused by harmful drinking, costing our NHS £3.5 billion, and wider society £21 billion.


The growing availability of cheap alcohol has fuelled this problem.


Alcohol is 60 per cent more affordable today than in 1980, with supermarkets and off-licences undercutting traditional pubs to the point that two-thirds of drinking now occurs at home.


Products like high strength ‘white’ cider containing the equivalent of 22 shots of vodka are sold for as little as £3.50.


Our current alcohol tax system, branded “a mess” by the Institute for Fiscal Studies, perversely incentivises the production of cheap, high strength products.


For example, strong white cider attracts the lowest tax of any drink – less than a third of equivalent strength beer. Moreover, recent cuts to alcohol taxes will cost the public purse £2.9 billion.


The ideal solution is a minimum unit price, targeted at the cheapest products favoured by children and the heaviest drinkers.


A 50p minimum unit price in England would save 525 lives a year. 80% of these would be from the lowest income groups. It would also reduce annual hospital admissions by 22,000, and cut NHS costs by £1.3 billion over 20 years.


In Canada a 10 per cent increase in the minimum price for alcohol led to a 32 per cent drop in alcohol-attributable deaths.


There’s a groundswell of support for alcohol policy change.


71 per cent of the public believe the Government has a responsibility to address alcohol-related harm, while 52 per cent support minimum unit pricing.


Leading doctors, children’s charities and homelessness groups have called for minimum unit pricing for a number of years.

Other UK nations are moving forward.


The Republic of Ireland is legislating for minimum unit pricing, and both Welsh and Northern Irish Governments have looked at this measure.


England should not be left behind; let’s take action on cheap alcohol.