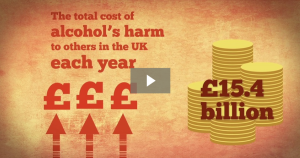 More than half of Brits are harmed by other people's drinking

More than half of Scots and three-quarters of people from North West England are harmed by another person’s drinking, according to a new report released today.

Produced by the Institute of Alcohol Studies with the University of Sheffield Alcohol Research Group, Alcohol's Harm to Others examines the extent to which consuming alcohol can impact on people other than the drinker.

The report combines a review of the evidence on alcohol’s harm to others and data from two surveys in which over 2,000 adults* were asked about the harms experienced from others’ alcohol consumption. These include being harassed or insulted on the street by someone who has been drinking, feeling unsafe in public, being kept awake at night and being sexually harassed.

When talking about alcohol problems we often think of damage to drinkers’ health. Liver disease, cancer and alcohol dependency are all big concerns for our National Health Service.

In addition to individual health harms, alcohol impacts many people other than drinkers. For example,

–   Workers having to work twice as hard to cover for their hungover colleague.

Rates of harm experienced by another person’s drinking in the UK are high.

In Scotland more than half of people (51%) have experienced harm from another person’s drinking, while in North West England this figure rises to more than three quarters (79%) of people.

Younger people are far more likely to have experienced harm as a result of somebody else’s drinking than older people.

The total cost of alcohol’s harm to others in the UK is estimated at more than £15 billion (£15.4 billion) each year, excluding the costs to family and social networks.

Evidence shows that the most effective policies to reduce alcohol harms, including harms to others, are:

–   Raising the price of the cheapest alcohol, through taxation and minimum unit pricing
–   Regulating the density of outlets that can serve alcohol and restricting the permitted hours of sale
–   drink driving laws, including a lower legal blood alcohol limit and random roadside breath tests
–   Screening and brief advice for people who are at risk of drinking to a level that is harmful to themselves and others

However, the most effective approach is a comprehensive, multi-sectorial set of measures that work together to reduce levels of harmful drinking. Together these can improve the health and well being of the population and create safer communities.