The Ukraine crisis is so far, not impacting on UK opinion polls

The state of the UK’s main political parties appears ‘becalmed’ following the Russian invasion of Ukraine on February 24.

Despite suggestions that the wall to wall news coverage of events in Ukraine may impact on how the public perceive the prime minister and the government, there is no evidence as yet, that the war is having any significant impact upon people’s voting intentions.

Polling averages extrapolated by politics.co.uk in the two weeks prior to the Russian invasion showed the Conservatives making some gains back from their polling nadir of late January 2022.  By mid February 2022, Labour’s lead in the polls had already dropped back to 5% from the 9% it had enjoyed for a three week period in January.

If a general election was held today, and the public vote reflected the average polling position in the two weeks since February 24, the result would be a hung parliament with Labour some 39 seats short of a working majority at Westminster.  With the other minor parties that take their seats at Westminster only amassing 37 seats, the Scottish National Party’s 56 MPs would single handedly hold the balance of power at Westminster. 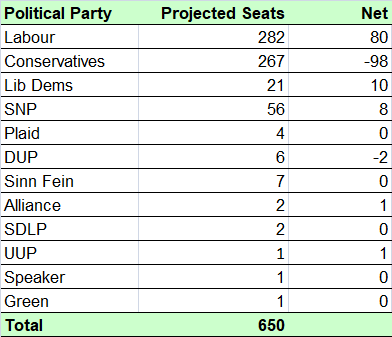 There is though one crumb of comfort for the prime minister. Where he was previously set to lose his Uxbridge constituency to Labour, he would now retain his Commons seat.  However he would do so with the honour of possessing the Conservative party’s most marginal seat at Westminster.

In any general election that reflected current opinion polling, deputy prime minister, Dominic Raab, would comfortably surrender his Esher and Walton seat to the Liberal Democrats. Returning to the position that existed between 1997 and 2001, the Conservatives would also face a total wipeout in Scotland, losing all their current MPs.