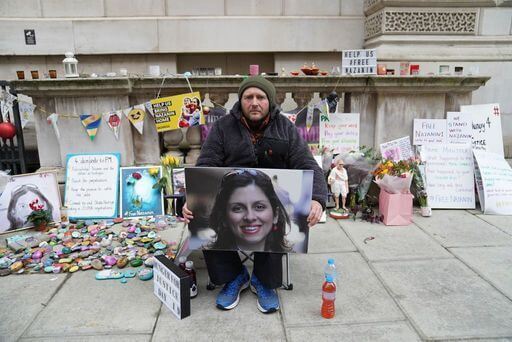 The shadow foreign secretary has today urged the Prime Minister to personally intervene to secure the release of Nazanin Zaghari-Ratcliffe from detainment in Iran.

Lisa Nandy told the BBC this afternoon that ministers she has discussed the matter with “privately over last 11 years”, have “said this will only be resolved at the highest levels of Government”.

Her remarks come as Mrs Zaghari-Ratcliffe’s husband Richard Ratcliffe has reached day 20 of his hunger strike outside the foreign office, in protest at the failure of Britain to secure his wife’s release.

The MP for Wigan continued earlier today: “The Prime Minister and Foreign Secretary need to get a handle on the case, show the Iranians this is a top priority of Britain. I am really concerned to hear that Richard had been asked to meet with a junior minister rather than the Foreign Secretary,” adding “These things are only resolved by personal intervention by prime ministers.”

Yesterday Middle East minister James Cleverly held a half an hour meeting with Mr Ratcliffe in which no progress was reportedly made.

Ratcliffe has previously held meetings with the foreign secretary, who is currently on an overseas visit to Asia.

Ali Bagheri Kani, Iran’s hardline deputy foreign minister is currently on a visit to the UK to meet with Foreign Office officials ahead of the resumption of the Vienna nuclear talks later this month.

An FCDO spokesperson said the Iranian Deputy Foreign Minister has been“pressed on the need for Iran to urgently release all British nationals unfairly detained in Iran, including Nazanin Zaghari-Ratcliffe, Anoosheh Ashoori and Morad Tahbaz”, adding that they “continue to work hard to secure the release of all those British nationals unfairly detained in Iran.

Ex foreign secretary Jeremy Hunt has also expressed his concern over the Ratcliffe case, telling the BBC yesterday that the UK “should absolutely pay” its debt owed to Iran in the hope it would alleviate the situation.

It is thought that the UK owes £400 million to the Iranian government due to its non-delivery of Chieftain tanks ordered by the Shah of Iran.

“It is a debt and this is a country that pays its debts,” the MP for South West Surrey argued in an interview with Sky News yesterday morning, pushing back on claims the transaction would be a ‘ransom payment’ to the theocratic regime that has detained scores of British citizens.

“There are also political considerations,” he said regarding the payment of the debt while Iran remains under US sanctions, he went on; “but given that President Obama did pay America’s debts to Iran in exactly the same situation, I think it’s unlikely that we would have the same objections from President Biden than we might have had from President Trump.”

He also acknowledged that there were “practical issues with sanctions,” but said: “those are things that you can sometimes get around, if you, for example, gave £400m worth of medicines or something like that.”

Boris Johnson himself has been accused of exacerbating the case during his tenure as foreign secretary.

In 2017 he erroneously informed MPs that Mrs Zaghari-Ratcliffe had been “teaching people journalism” before her detainment by Iranian authorities. While her family and employer have both maintained that these comments were untrue, his statement was referred to as proof by Iranian authorities that she was responsible for “propaganda against the regime”.