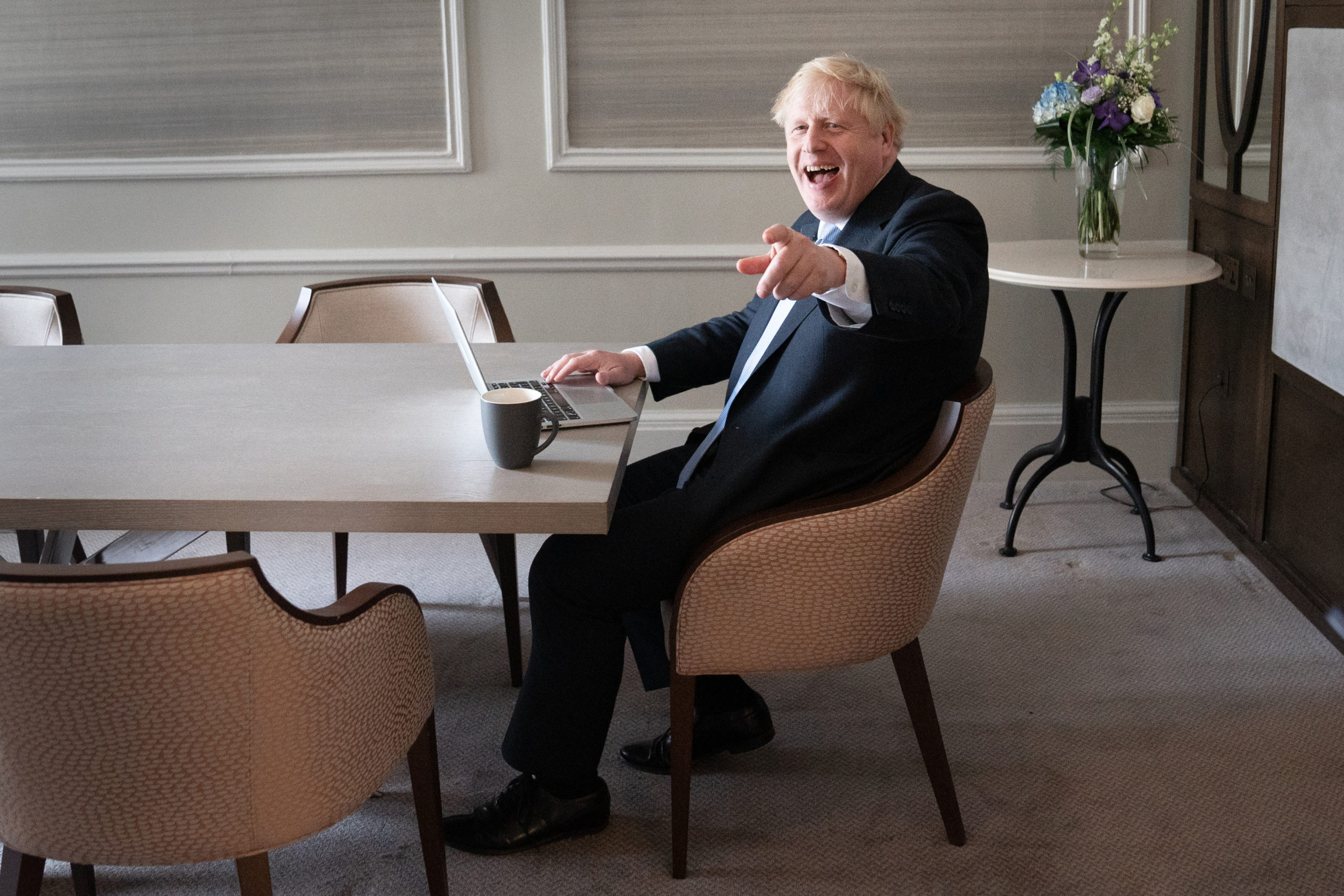 An odd speech, filled with rhetoric and jokes and rattled off at 100MPH. Supporters lapped it up, but will the public?

It didn’t exactly feel like a turning point as Starmer’s did last week, but the Conservatives don’t need that either. Perhaps the best thing for the party was continuity.

Either way, that’s all from us! Thanks for joining us.

from @matthewlesh at Adam Smith Institute:

"Boris’ rhetoric was bombastic but vacuous and economically illiterate..

..shortages and rising prices simply cannot be blustered away with rhetoric about migrants. It’s reprehensible and wrong to claim that migrants make us poorer."

Boris Johnson now squats like a giant toad across British politics. He has expanded the Overton window in both directions. Praising bankers and drug companies, while tight on immigration and woke history. Cheered for lauding the NHS and pro LGBT. Where does Labour find a gap?

the PM's speech did tackle imminent NICS rise (saying Thatcher would have approved) but he did *not* mention:

A strong speech from @BorisJohnson to round off #CPC21. We were elected in 2019 on a mandate to level up areas of 🇬🇧 that have been left behind, and despite the challenges of Covid 19 we are building back better and #GettingOnWithTheJob

The Prime Minister’s speech to #CPC21 is more stand up than statesman. An embarrassment to our country which reduces Britain's standing in the world

🛣️ Great to hear the Prime Minister prioritising upgrading roads like the A1 north of Berwick, levelling up our country and creating opportunity https://t.co/nSbb16Tqqw

PM’s speech was again filled with promises & bluster about the future rather than concrete plans for how he’ll deliver now.

The Spending Review later this month must deliver for the North.

That’s why I went to Manchester this week to take the case to Ministers directly. https://t.co/Q2QHm33Mtg

12:25pm – How will the speech go down? I suspect Conservatives will love the comedy, and critics will dislike the lack of detail.

Essentially if you like Johnson, this speech was for you. If you don’t, maybe give it a miss.
That’s all from us, thanks for following!

🔹A move away from “broken old economy” and stagnation
🔹Argued against uncontrolled immigration
🔹Funding for teachers in science and maths
🔹Low on detail, lots of slogans and jokes
🔹A much more united party than their opposition

12:17pm – And it’s done! 45 minutes, roughly half the time of Starmer’s speech. The end came as a bit of a surprise there – just ended hesitantly.

12:15pm – Discusses our sporting achievements, praises the Olympians and Emma Raducanu. Special praise for Paralympians too.

“A country proud to be a trailblazer to judge people not by where they come from but by their spirit.”

12:14pm – “I believe through history and accident, this country has a unique spirit.” Praises UK technological companies, says we are one of three to have produced over 100 “unicorns” (tech companies worth over 100bn).

12:13pm – Onto Churchill (of course): “They really do want to rewrite our national history, starting with Herod the woke. We Conservatives will defend our history and our cultural inheritance.”

12:11pm – “No other government brokered a deal such as we did with Astra-Zeneca… We are led by our values and the things that we stand for. People around the world admire this country for the things this country stands for. We attack and deny our history at our peril.”

12:10pm – On Aukus: “An idea so transparently right that the Labour conference voted against it”

12:08pm – Really hard to put into words how quickly Johnson is rattling through this. Eminem would be impressed.

12:06pm – Hurls a whole load of colourful jabs at Labour and the “Corbynista mob”.

“Captain Hindsight, attacking one week. The Starmer chameleon. He decided to oppose Step 4 of the road map… if Columbus has listened to Captain Hindsight he’d be famous for having discovered Tenerife.”

12:04pm – Onto COP26 now, discusses many of the people who have moved across from oil and gas and into the clean energy sector.

12:02pm – “Let me come now to my punchline on the sermon of the vaccine… it was the private sector that made it possible… It was capitalism.”

12:01pm –  Johnson seems intent on fitting in an odd phrase, joke or Latin word into almost every single sentence.

“Beautiful homes on brownfield sites where homes make sense. This gov. is helping young people afford a home. It is a scandal that over the last 20 years the dream of home ownership has receded.”

11:59am – Repeats the common line: “We need young people back in offices.”

11:58am – Investment in roads, “Unblocking… roundabouts and putting on 4,000 clean green buses, some of them running on hydrogen.”

11:55am – Camera pans to Michael Gove and looks like he’s about to cry, I believe tears of laughter.

11:55am – “Announcing today a levelling-up premium… to send the best maths and science teachers to the places that need them most. We’re investing in our skills… our universities are world-beating… but we all know that some of the most brilliant imaginative and creative people did not go to university.”

11:54am – It’s really hard to keep up with how quickly Johnson rattles through his points…

11:53am – Takes a poke at Michel Barnier for questioning France’s EU status.

11:51am – Onto sexual offences briefly now: “Too many lying, bullying, cowardly men are using the laws to get away with violence against women.”

11:49am – “You know those people gluing themselves to roads… I say they’re a confounded nuisance who are blocking ambulances, stopping people going about their daily lives… and I’m glad Priti is taking new powers to insulate them snuggly in prison where they belong.”

11:48am – “It is still a grim fact that in this country some kids will grow up in neighbourhoods that are much safer than others… many others will not. And that’s why levelling-up means fighting crime, putting more police on the beat.”

Patel smiles and nods along.

11:46am – “Huge philosophical difference between us and Labour. Because they don’t like levelling-up, they like levelling down… taxing the rich until the pips squeak… in Islington they like kids to run races where nobody actually wins, and I don’t think that is a good preparation for life.”

Take from all that what you will.

11:45am – Johnson is enjoying himself here, chatting to the audience and making plenty of jokes which are going down well. It’s a much more united conference than the Labour one.

11:45am – Outlines the disparities between different parts of the UK: “It is holding this country back… There is no reason why the inhabitants in one part of the country should be geography fated to be poorer than others.”

11:43am – Johnson says he will not allow uncontrolled immigration as a means to keep wages low. “High wage, high skill… low tax economy. That is what the people of this country need and deserve.”

11:41am – Says thanks to vaccine rollout the UK has fastest growth in the G7. “We have unemployment 2 million lower than expected”. Says wages are going up after a decade of stagnation.

Again, the Conservatives have been in power all that time.

11:39am – Johnson outlines how to improve social care. Says they will not up taxes but will use “new technology”. “Cash on the frontline and not in needless bureaucracy.”

11:37am – “This is the priority of the British people”, says his party should help the NHS, but also says that “more borrowing now is just higher taxes later.”

11:37am – “The NHS pulled my chestnuts out of that Tartarean pit”

11:35am – “You made this rollout safer” – Johnson thanks his party, public health workers, pharmacists and “unbeatable” NHS for covid work

Johnson is expected to reveal a new economic policy to replace the “old broken economic model”. It has been point out by many that not only have the Conservatives been in power for over a decade, they have been in power for 29 of the last 42 years.

Times Radio’s Tom Newton-Dunn has reported that the speech will be “very policy-lite” saying, “In the last 48 hours, two separate No10 sources told me there would be a big policy rabbit in it. So it looks like there has been a late omission.”

As mentioned earlier, there hasn’t been as much of a ‘bounce’ as you’d normally expect after a set of conferences, but considering everything that is happening, Johnson will be pretty pleased to see his party this far ahead even before his speech:

Johnson is expected to focus on his “build back better” slogan, so expect some comments on levelling-up and tackling long-term challenges.

One of the takeaways from the Conservative conference has been a common thread of distancing themselves from the “stagnation” of the past 10 years, despite that also being a Conservative government.

Johnson is also expected to address the fuel crisis and empty shelves, and likely he’ll try and address the issues felt by many as we approach the so-called “winter of discontent”.

10:30am – After Starmer’s successful show in Brighton last week, can Boris beat him?

Usually parties get a bounce after their conferences, but after the infighting at the Labour conference and misplaced positivity in the face of a tough winter at the Conservative conference, both parties might feel like they could have done without the last few weeks.

Unlike with Starmer, it’s fair to say this isn’t a make-or-break situation, but Johnson will want to lay out some positives on the day that millions have lost out on the universal credit uplift.