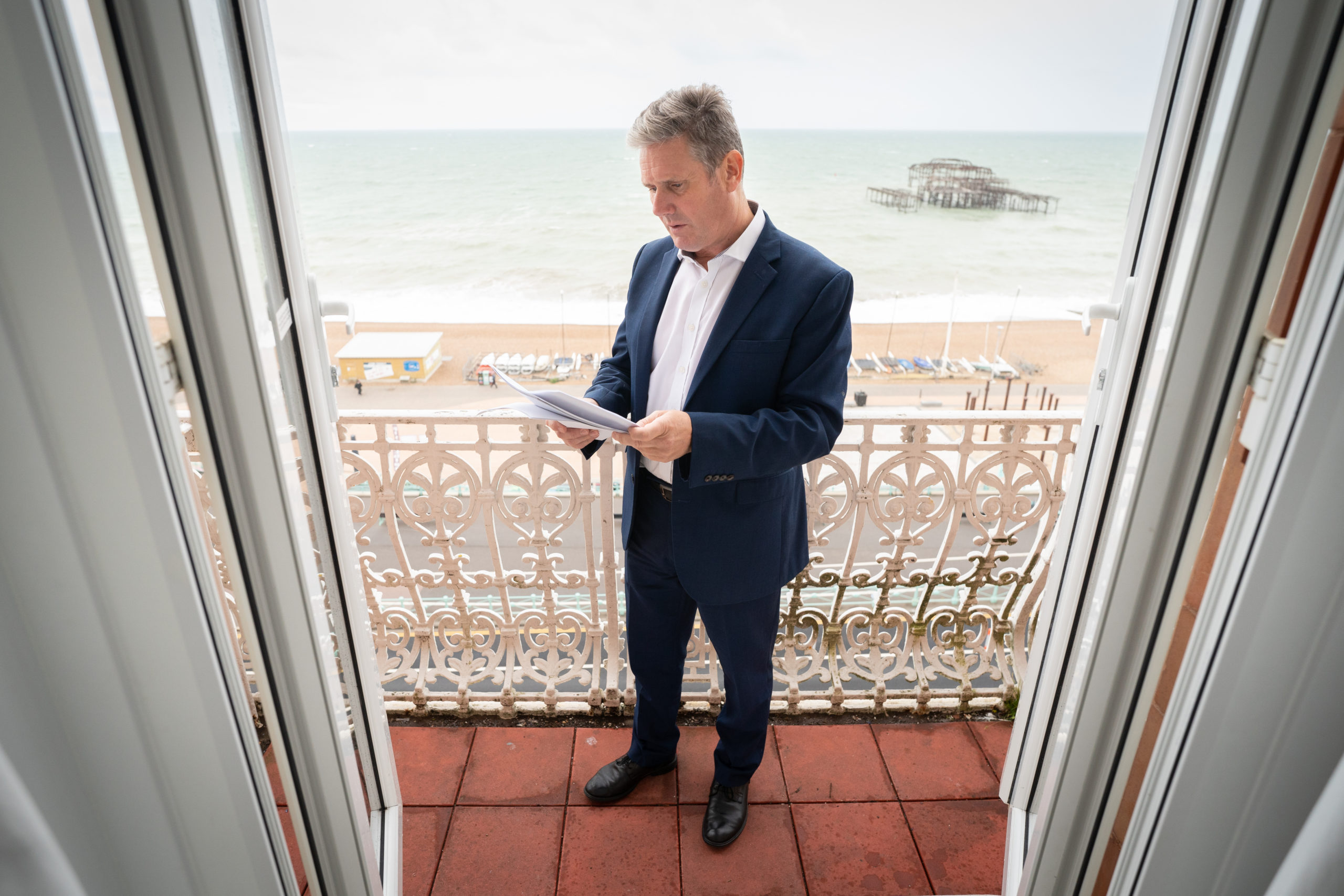 Barnstorming and inspirational speech from @Keir_Starmer to close #LabourConference2021.

These are the tools @UKLabour will use in government to build a stronger future together. pic.twitter.com/IQdmGDmvCN

1:51pm – Angela Rayner doubles down on support for Keir Starmer. After all the mess that we’ve seen over the last few days, the Labour conference seems to be ending on a high.

1:43pm – Media reaction: Light on policy, but strong on priorities

I think that @Keir_Starmer speech is like the new James Bond film – delayed, long but gets good reviews. #Lab21

Some clear priorities there for a Labour government, but overall the speech was thin on specific policy. We still don't have a clear impression of what Labour would *do*, but we remain some way off an election.

Lots of good lines, light on policy but quite a long explanation of what he is about and his family story.
Work. Care. Equality. Security may well stick pic.twitter.com/SFfdtv1aIY

He’s pretty chuffed with how that went. Heckles helped. Long road to go.. but at least the opposition are finally having a crack at credibility. pic.twitter.com/yr8IgaI7oG

Today @Keir_Starmer clawed it back, a fantastic personal and political address that gave me hope, we have a long way to go but are heading in the right direction. 💪🌹#Lab21

I support a patriotism that thinks supporting our armed forces, our NHS and our football team define our values more than spending billions on a yacht actually. https://t.co/pSKsuvIxzl

“Work. Care. Equality. Security. These are the values at the heart of the British public, which is where our party must always be. They are also my tools & with them, I will go to work.” Many of us have waited so very long to hear a speech like this. Labour is back in business.

This conference, the Labour Party needed to show it was serious about change and rebuilding trust with the public.

With immense courage and leadership, @Keir_Starmer has shown this week that he understands that challenge, and is ready to take it on. #Lab21

1:39pm – Strong argument to say the heckles helped Starmer. He responded quickly and wittily to them all, and in the end the cheers drowned them out.

Also helped him prove how he is setting out a new different path for Labour.
Is it 1997? No – but Labour is turning a page.

The main takeaway is how Starmer wants Labour to be a different party to that under Corbyn, and also the Conservatives. Labour wants to be the party of the future.

Chants of “Keir” as the speech ends and he thanks conference.

“Work, care, equality, security. I think of these as British values.”

1:30pm – “In a few short years from now, I want to be here with you talking about the problems we’re fixing as a Labour government.”

1:29pm – Emphasises the importance of winning.

“If they’re so bad, what does that say about us? Because after all in 2019, we lost to them, and we lost badly.”
“We can win the next general election.”

1:26pm – “I’m proud of the work they [the army] did for us in Afghanistan. It grieves me to see Britain isolated and irrelevant. Labour is the party of NATO, of international alliances. We will rebuild our alliances.”

1:25pm – Marcus Rashford time: “When Rashford and the England team took the knee, the home secretary encouraged people to boo.” “Well in this conference hall we are patriots.”

1:22pm – Really goes for the SNP now. Compares them to the Conservatives as a divisive party.

1:21pm – “Scotland is in the unfortunate position of having two bad governments”… so no election pact happening there then.

Talking about Labour metro mayors: “You can see the power of Labour in power today.”
Massive cheer after for Mark Drakeford and Welsh Labour.

1:16pm – “We will introduce a Clean Air Act. Everything we do in government will have to meet a net zero test.”

1:14pm – Starmer mentions green new deal, gets a huge round of applause and standing ovation.

“Our green new deal will include a climate investment pledge to put us back on track to cut the vast majority of emissions this decade.”

1:13pm – Starmer again compares modern technology with his father’s career, saying about how cutting-edge technology can be the path out of climate change.

“Of the 250 wind turbines at Whiteley, not one of them was made at Britain.”

“But that obligation shouldn’t daunt us. It should embolden us.”

1:09pm – Criticises Corbyn and past leaderships, saying that there will be no uncosted promises and that a good economy must fund a good society.

“Labour will be back in business.”

1:08pm – Starmer says the B word! “A botched Brexit… you need a plan to make Brexit work.”

“The public finances we inherit will need serious repair-work. I take the responsibility of spending your money extremely seriously.”
Starmer wants to restore trust in Labour’s economic policy.
1:04pm – Starmer emphasising bringing forth the next industrial revolution. Managing to link patriotism of past inventions with a forward looking attitude – a contrast to the Conservative government.

1:01pm – “We once took it for granted that our children would enjoy more than their parents.”

“But after 10 years of the Tories, we’ve lost this. We have 5.7 million people in low-paid and insecure work.”
“15 pounds an hour” gets heckled back

12:58pm – “They want to reintroduce Latin in state schools. So let me put this crisis in the only language Boris Johnson will understand: carpe diem, seize the day.”

12:57pm – “Labour will write a curriculum for tomorrow. Reading, writing and arithmetic are the pillars of education. We would add a fourth… digital skills.

“We need to ensure every child emerges from school ready for work and ready for life.”

12:55pm – “Employers in all sectors tell me they need well rounded young people.”

“That why it’s stupid to allow music, drama and theatre to collapse in state schools.”

12:53pm – “200,000 children grew up in areas with not a single primary school rated as good or outstanding. Just think about that.”

“I want every parent in the country to be able to send their child to a great state school.”

12:47pm – “We would shift the priority of the NHS away from emergency care towards prevention.”

“We can catch problems early and at the same time use the resources of the NHS better.”
Emphasises wellbeing as well as physical health.

12:45pm – “An unfair tax hike that doesn’t fix social care, and doesn’t clear the NHS backlog, is not a plan. We know that people will still be forced to sell their homes for care, working people will have to pay more.”

12:43pm – On covid: “After a decade of cuts and neglect, the health service wasn’t ready.”

“1.6 million older people were going without the care they needed… waiting list for treatment had spiralled. Then on top of that, the government was fatally slow to respond.”

“Once he said the words ‘get Brexit done’, his plan ran out. There is no plan.”

“Contracts handed out to friends and donors. The former PM lobbying the government by text.”
“On behalf of the public… I put this government on notice.”

12:36pm – “The one thing about Boris Johnson that offends everything that I stand for is his assumption that the rules don’t apply to him.”

“When I got pinged, I isolated. When Boris Johnson got pinged he tried to ignore it. That’s not how I do business.”

12:35pm – On lack of police fundings and legal system backlog: “The Tories are letting you down and I can promise you that will never happen under my leadership.”

“We will toughen sentences for rapists, stalkers and domestic abusers.”

Starmer doubling down on the tough on crime rhetoric that has come out over the past week or so.

12:29pm – Much of Starmer’s speech seems to be focusing on his previous work as a lawyer and early life. An attempt to counter dishonesty and untrustworthy arguments from the left?

12:21pm – “When that long day was over, I thanked them [the nurses] for what they’d done. And they said to me they were just doing their job.”

“Let this conference ring out it’s approval to the NHS staff, truly the very best of us.”
The conference obliges with a standing ovation.

12:18pm – Supporters seem to have been instructed to applaud every time there is a heckle.

12:15pm – JOKE ALERT: “I’m not from a privileged background. My dad was a toolmaker, although in a way so was Boris Johnson’s”

12:14pm – Starmer addresses “two paths” to be learned from covid. One leads to poverty, which he says the current government is going down.

The other, under Labour, leads to a “prosperous economy in which everybody has a role to play.”

12:12pm – “We will never go into an election with a manifesto that is not a serious plan for government”
Huge applause for this. Clearly a pointed statement at Corbyn in 2019.

12:11pm – “My job as leader… is to understand and persuade the voters who rejected us.”

“They couldn’t trust us with high office. They didn’t believe that our promises were credible”
This brings on some heckles.
12:09pm – “A tank of fuel already costs 10 pounds more than it did at the start of the year… gaps in the supermarket shelves. Rent up, especially for those on low incomes.
Yet this is the very moment the gov. puts up tax on working people… shamefully slashing universal credit”

12:07pm – One person chanted “oh Jeremy Corbyn” but was quickly drowned out.

12:00pm – Doreen Lawrence comes onstage is being welcomed onto the stage. He’s greeted by whoops and cheers.

Doreen Lawrence comes onstage. On Starmer, she jokes about meeting him many years ago. “Even back then, he had good hair.”
“Keir’s always on the side of families who deserve justice.”

11:13am – Starmer popularity: A declining graph

Keir Starmer has tweeted out ahead of his speech today, saying:

Today, for the first time since becoming Labour’s leader, I am delivering my speech to an in-person Conference. I will be setting out my vision for a brighter, more prosperous Britain.

Ipsos MORI polling does not present a pretty picture for Starmer:

We will not be making proposals that cannot be costed, the public need to know where the money is coming from.

Clearly it was the case at the last general election, we were coming up with policies like free broadband, policies on pensions for women, a four-day week, and the public were saying ‘how much is this going to cost’?

It was coming at the last minute, they felt confused and they didn’t feel able to trust us because of some of the issues that were dominating the party.

Keir is not going to make that mistake, things have to be costed.

10:30am – It’s the one we’ve all been waiting for: Keir Starmer will be giving his Labour party conference speech today at noon. After a difficult few days for the Labour party and the leadership, he’ll be hoping this marks a turning point in his time in charge.