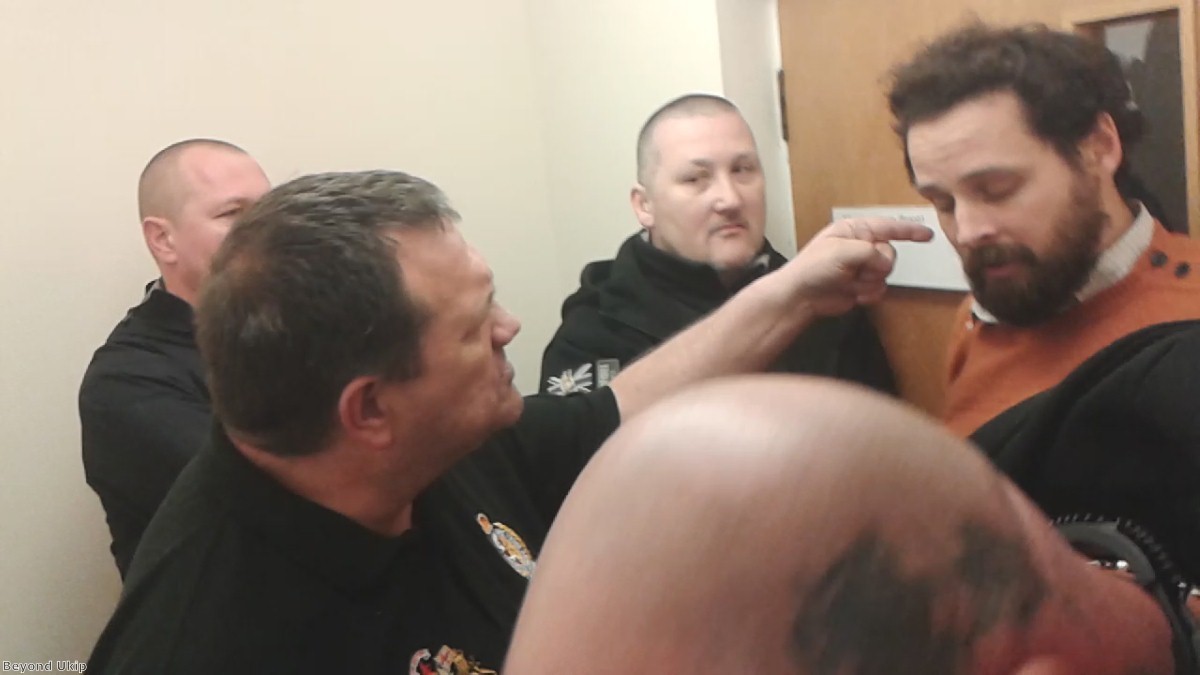 Shouting "left-wing scum, off our streets" the Britain First activists tried to force their way into a meeting being held by the 'Beyond Ukip' group at an office block in Old Street, London.

Saying "we've come here tonight to give them a taste of their own medicine," Britain First leader Paul Golding repeatedly tried and failed to enter.

Speaking to one member of the 'Beyond Ukip' group outside the meeting, Golding warned them: "If you overstep the mark you will find us on your doorstep."

The action was taken in response to 'Beyond Ukip's' recent controversial 'diversity cabaret' demonstration at the Ukip leader's Kent pub. The left-wing activists were labelled "scum" by Nigel Farage after they confronted him and his family while they were having lunch.

Speaking to Politics.co.uk, 'Beyond Ukip' leader Dan Glass claimed that some of his activists had been assaulted by a Britain First member. A spokesperson for the Metropolitan Police later confirmed that a 48-year-old man had been arrested on suspicion of assault.

Asked whether his own group's actions had legitimised the kind of actions taken last night by Britain First, Glass said there was a "huge difference" between them.

"Ours was a family-friendly demonstration with fancy dress and a conga line. These were huge men trying to beat their way into a meeting. There is a huge difference."

Asked whether he now regretted their original demonstration at Farage's pub, Glass said that he didn't.

"No absolutely not. Look, you have to take risks. Would I do it again? Yes I would."

Ukip have been dogged by continued associations between them and Britain First. The group have repeatedly urged their supporters to back Nigel Farage's party with the slogan: "Ukip at the ballot box, Britain First on the streets."

Golding also recently wrote in a leaflet that he would 'strongly urge our supporters to vote for Ukip as they have the best chance of making breakthroughs at the ballot box.'

'Whatever happens in May, between Ukip and Britain First, this year could herald a resurgence of patriotic politics in Britain,' he added.