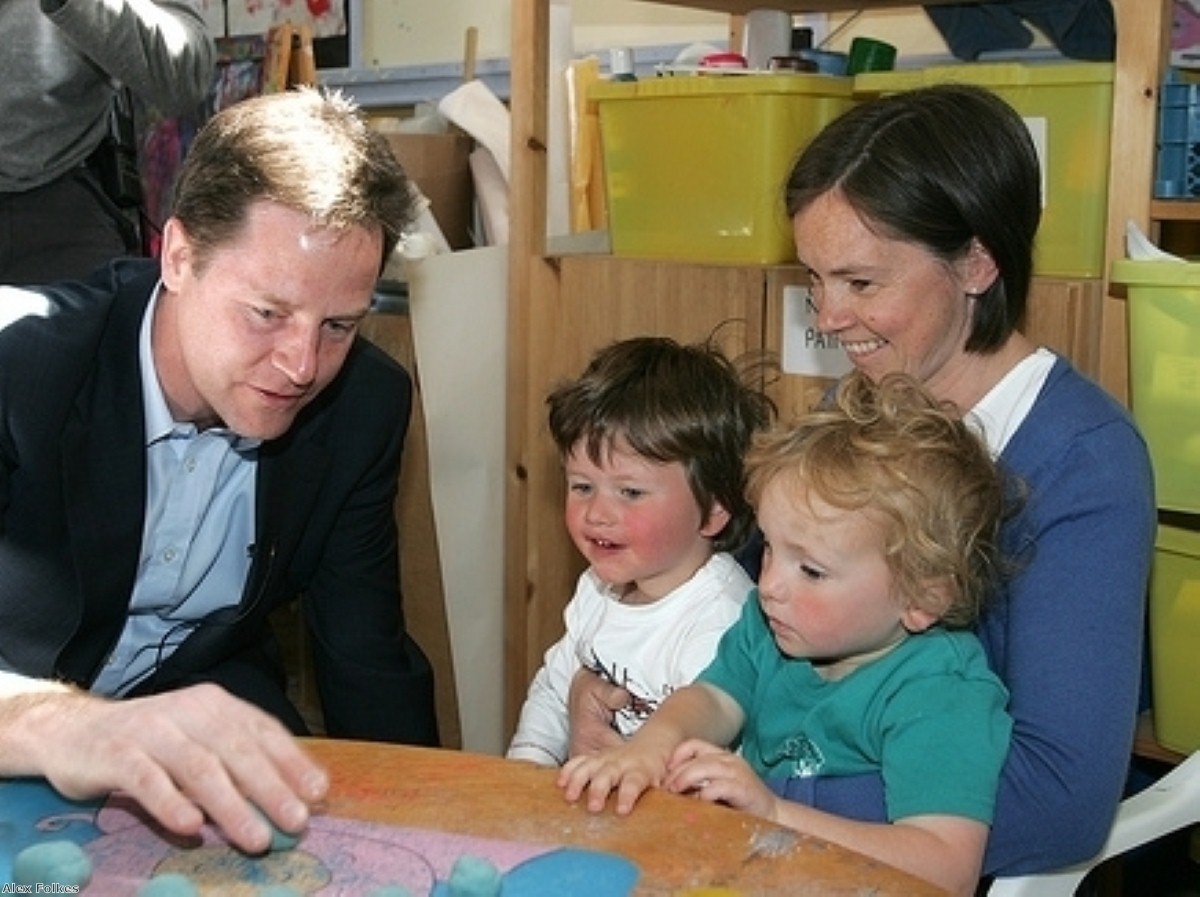 The government is expanding its childcare offer to struggling parents – but will continue to help those with a joint income of £300,000, too.

Deputy prime minister Nick Clegg defended the decision to help rich parents with their childcare costs by claiming attempting to tweak the system was too complicated.

"People who are on higher than average incomes, yes, they will benefit from this," Clegg said this morning.

"We decided to do that because, the more we looked at introducing a cut-off point at different income levels, the more complex it became."

Under the changes outlined today the coalition is significantly expanding the amount of childcare it is prepared to help pay families where both parents are in work.

Instead of offering a maximum of £1,200 per child the government is now prepared to pay 20% of the total bill, provided that does not exceed a maximum of £10,000.

This is unlikely to actually cover a fifth of the childcare total as the average childcare bill exceeds £11,000.

But it represents a major expansion of the programme, which will now be available for children under 12 instead of those aged five or younger.

The scheme is being brought forward until next year, rather than being phased in over a lengthy period.

Labour accused the government of electioneering with the policy, however.

"David Cameron has cut support for children and families by £15bn since he came to office," shadow childcare minister Lucy Powell said.

"And today he confirms that no help will arrive until after the election. This is too little, too late.

"Of course any childcare support is welcome but this government has done nothing in this parliament to help parents experiencing a cost-of-living crisis.

"Childcare costs have spiralled by 30% since 2010 and the Tories have rejected Labour's plan for 25 hours free childcare for working parents of three- and four-year-olds."

The coalition is providing an extra £50 million to help fund nurseries that look after the most disadvantaged three- and four-year-olds, however, in a bid to distract from help for the highest-earning families.

Those claiming universal  credit will now have 85% of their childcare costs met instead of the 70% previously planned.

"It will help millions of hard-pressed families with their childcare costs and provide financial security for the future."

Only parents who earn over £150,000 will be ineligible for any support. Single parents will not be eligible either, prompting dismay from some quarters.

"It's a disgrace that taxpayers' money will be used to contribute to the childcare bill of families earning up to £300,000," Laura Perrins of campaign group Mothers At Home Matter told the Mail newspaper.

"The Old Etonians need to take a trip to reality street."

Others praised the coalition for its moves to help the poorest in society get more affordable childcare, however.

Jonathan Rallings of children's charity Barnardo's said: "Today marks a victory for the UK's most disadvantaged children, on which the government should be congratulated," he said.

"We now look forward them boosting the nursery premium over time so that it eventually reaches the same level as the Pupil Premium."

The National Childcare Trust said the announcement on childcare was welcome, but complained that the government should be doing more to address statutory maternity and paternity pay, which is £100 a week lower than the full-time minimum wage.

"NCT wants the 2014 Budget to end this parent penalty and demonstrate they value parents by raising maternity and paternity pay rise in line with inflation," chief executive Belinda Phipps said.