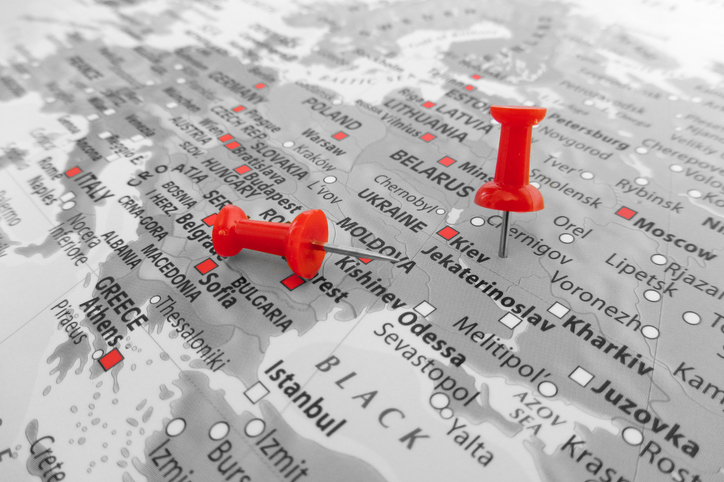 I’m no apologist for Putin, but…

I’m no apologist for Russian president Vladimir Putin, nor for Russia’s annexation of Crimea and its attempts to destabilise Ukraine – and the western alliance of democratic countries more generally. I’d prefer Putin to be gone and for Russia to become a genuinely democratic country with normal relations with Europe, America, and the rest of the world.

But when we see the extreme measures Putin and Russia will risk taking to prevent Ukraine and Georgia becoming NATO members, I think we have to ask ourselves are we missing something here, and failing to understand why Putin and Russia act this way?

There’s lots of historical context to Putin’s dissatisfaction with Russia’s post-Cold War settlement and its place in the current world order. But on a basic level, those in the US might at least begin to see his perspective, to some extent, if they imagine Canada preparing to sign up for a military and political alliance with Russia, as unlikely as that may seem. Or for those in the UK, imagine the Republic of Ireland in a similar military and political alliance with Russia or China. Would you be comfortable with that? Might you feel threatened by that?

One can see that those might seem like existential threats, especially to an embittered and isolated dictator that believes it’s his mission to restore Russia as a great power.

Once we see that perspective, I think we then need to ask ourselves, what are our real red lines? Yes, Poland and the Baltic states (Estonia, Latvia, Lithuania), along with Romania and Bulgaria, are NATO members now and EU members, and there’s no going back from that. Those are real red lines now.

But can we be more pragmatic about Ukraine’s NATO ambitions, and those of Georgia and other former Soviet states that are not already in the alliance? Is there a compromise we can explore, such as an agreement to rule out NATO membership for a decade, or 15 years, and to review it every 5 years?

I don’t know what compromise Russia would accept and whether it could be a viable one to the West. But it’s got to be worth exploring; because war in Ukraine and, ultimately, regime change in Ukraine is surely not an outcome that is helpful for Ukraine and its democratic independence. And it’s going to hugely escalate tensions with NATO and the West, especially when combined with crippling economic sanctions on Russia and a further military build-up by both sides.

Russia has already withstood years of sanctions since it annexed Crimea, so it may feel gaining political control of Ukraine is worth the pain, as it has concluded so far with the current sanction regime. But cutting off Russia from the international banking system is more extreme and may be seen by Russia as an act of war, something Russia has implied. It will surely lead to retaliation by Russia, presumably including cutting gas supplies to Europe and further attempts to destabilise European countries. It’s an atmosphere that could easily lead to miscalculations and irreversible, catastrophic mistakes.

I get the argument that we shouldn’t give in to blackmail or coercion – or that if you give way to authoritarians, they come back wanting more. But we could put conditions on any such deal, such as a requirement to maintain Ukraine’s political or military neutrality, or Russian withdrawal from the Donbas, or the fulfilment of the Minsk 2 agreement, or a range of other options.

Nevertheless, we need to address Russia’s apparently serious concerns about Ukraine’s NATO ambitions before it’s too late – and that means really urgently. Sure, don’t concede too much, and ask for concessions in return from Russia. But let’s at least put the issue back on the table.

This might look to some like appeasement, but it’s not – it’s Realpolitik. As uncomfortable as it is to consider a deal with a bullying, kleptocratic regime like Putin’s, we have to explore any possible areas of common ground or scope for compromise, not revert to dogma.

Otherwise it seems likely that we will end up with war in Ukraine, and potentially an inescapable slide towards an even more devastating war between Russia and NATO that no one wants and few may survive. Talk in the Russian state-controlled media now about how it is possible for one side to win a nuclear war may be mostly sabre-rattling, but we know that the threat of Putin taking other forms of military action are not. He’s proven that already in Georgia and Ukraine, and demonstrated in Syria that Russian forces are willing and able to commit acts of extreme brutality to achieve their aims – without much fear that Russia’s domestic population will meaningfully object. Putin’s control of the Russian media ensures that.

Former head of MI6 Sir Alex Younger observed today that given the maximal nature of Putin’s demands, and given that he’s rejected what NATO regards as the only reasonable compromise, “it’s hard to see how he can avoid having to follow through to some extent. And at that point, you unleash the law of unintended consequences.”

That’s why NATO needs to urgently review its red lines and consider again whether it could be reasonable to at least pause its expansion eastwards – and give Russia assurances to that effect.