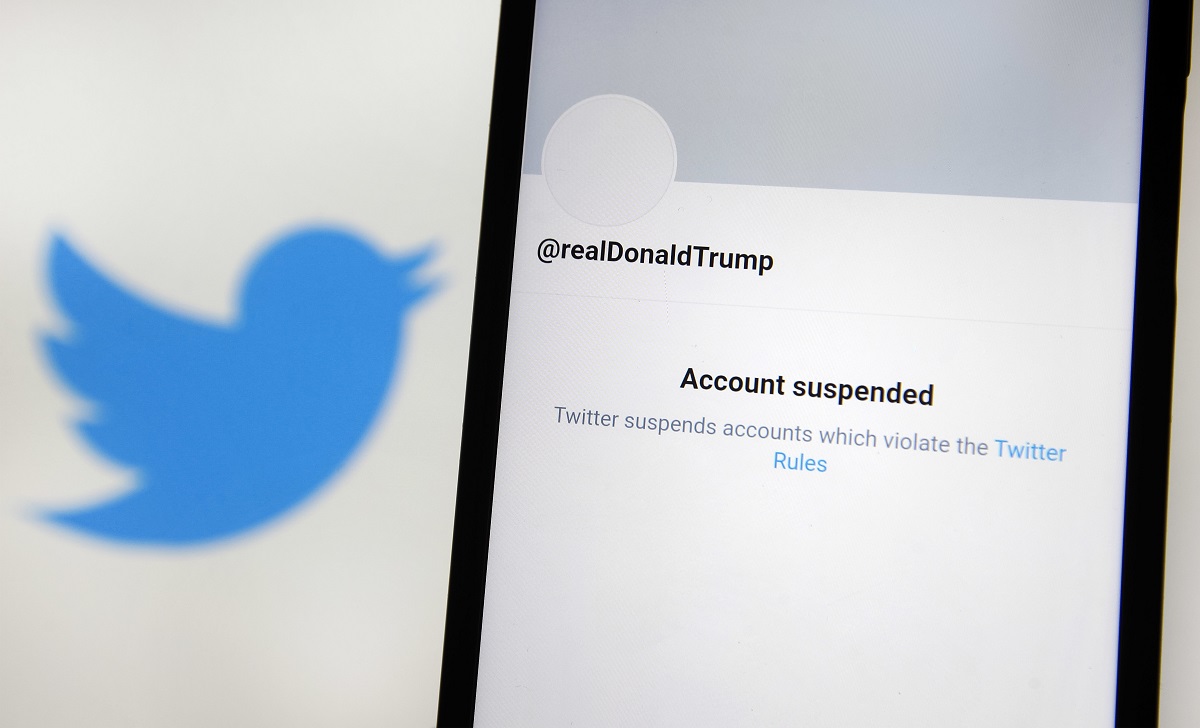 Closing down Trump: Time for a grown-up debate about free speech

The most disreputable people can occasionally say the most self-serving things and yet still have a trace element of truth in them. That was the case this week when the social media companies banned Donald Trump and demolished the ecosystem of angry racists who developed underneath him.

When the moment finally came, it happened all at once. After half a decade of spewing divisive and hateful lies, the US president was suddenly ejected from Twitter and Facebook. Parler, the knock-off lunatic wing of social media, was denied access to Amazon Web Services and removed from the Apple and Google app stores.

Trump’s supporters are treating it as an attack on freedom of speech, a full-frontal assault by liberal America to forever close down the nationalist right’s ability to speak.

It’s preposterous nonsense. There is no absolute right to freedom of speech. It is tempered by speech’s potential for closing down freedoms in other areas. If someone walks down the street calling for the murder of a different social group during a riot, that speech can be legitimately censored and they can be arrested. That’s because the violence they are inciting would lead to their targets losing other fundamental freedoms – namely the right to life, or freedom from assault.

Last week, Trump incited a violent mob to try to take over Congress. They beat policemen. Some entered with firearms and plastic handcuffs. It is not worth thinking what would have happened if they had found the politicians they were presumably looking for. And even putting that aside, their stated aim was to overturn a legitimate election result. If they succeeded, America would turn from a democratic society to a thug state in which the brute force of a crowd decided electoral results.

These possibilities were not abstract. They were a clear and present danger. It was therefore legitimate to censor political speech online, and in particular the communications services which Trump’s movement are using to organise ahead of the inauguration of Joe Biden on January 20th.

But there is, nonetheless, something disturbing about what has taken place and how quickly it was enacted.

When Twitter banned Trump, it justified the decision by highlighting a tweet in which he said: “To all of those who have asked, I will not be going to the Inauguration on January 20th.” This seems almost laughable. Over the last four years, Trump has said many worse things than this. In fact, on any average day of his presidency, this would be considered an unusually polite message. 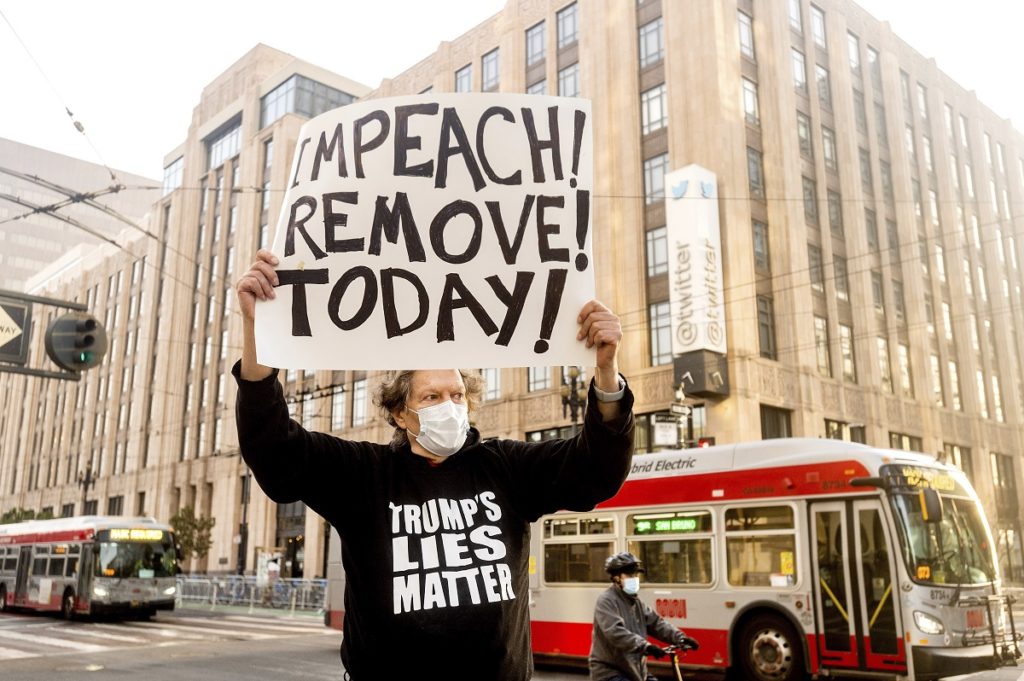 Kenneth Lundgreen holds a sign against President Donald Trump outside the headquarters of Twitter on 11 January 2021, in San Francisco. (AP Photo/Noah Berger)

Twitter said it acted as “encouragement to those potentially considering violent acts that the inauguration would be a ‘safe’ target”. This reasoning involves a contentious interpretation of his words. But back in May, Trump said of the Black Lives Matter protests: “When the looting starts, the shooting starts”. This did not involve any interpretation at all, contentious or otherwise. It was a clear appeal for police violence. And yet Twitter at the time simply put a ‘public interest notice’ on it, leaving the original text visible.

For years we have sat and watched as Trump and his thug underlings have pumped poison into our political culture and the social media companies did nothing. Then after the election they put warnings on his comments about electoral fraud and now they have banned him altogether. Those are both perfectly justifiable decisions, but it’s hard to take them at face value. Instead, it seems likely that two things have changed their mind: a sudden change in political leadership in Washington and a newfound consensus that Trump’s movement is morally intolerable.

This is not the way this should be happening. It is a chaos of suddenly realigned interests. And it has major repercussions. Being banned from social media is not equivalent to being banned from the pages of a particular newspaper. For those in politics, it is akin to being exiled from the public square.

Trump’s admirers are wrong to pretend that free speech has no limits. But there is a grain of truth in their argument. These decisions are not being taken on principle, but on circumstance. And if you care about free speech, you can’t allow for that to continue. Not only is it wrong on its own terms, it contributes to the narrative that they are the subject of an establishment conspiracy.

These proposals raise as many questions as they answer. Why would a nationalised company be any better than a privately owned one at operating in the public interest? Why would civil service control of free speech be any more representative or valid than private sector control?

How would a code of conduct operate? If it was genuinely to ban fake news, it would have to take down a great deal of the content on the Daily Express, Daily Mail and the Sun. Perhaps we’re happy with that, but we better go into it with our eyes open. Just how much of a lie would something have to contain before it could be removed? Would a standard bit of bending-the-truth from a politician count? If so, any watchdog charged with enforcing the code would suddenly have an extraordinary degree of power over public discourse.

What guarantees do we have that social media companies have improved? How are they making themselves more transparent? How are they demonstrating the degree of scrutiny necessary given the extent of the power they have amassed?

We don’t have the answers to these questions yet. It’s unreasonable to expect people to, and anyone that claims they have is typically quite fraudulent. But we can at least start by being honest about what we are trying to do.

We can give up the disingenuous Trumpist gibberish that any action against him is an affront to free speech. Free speech has limits, which have been recognised by liberals throughout history. But we should simultaneously reject the common refrain, popular on the left, which dismisses all concerns by saying private companies are entitled to decide who they want to publish. In reality, not being published on the basis of your views is an act of censorship, and that goes triply so in the case of social media companies, where so much of modern debate takes place.

We have to get rid of the absolute perspectives – that any curtailment of free speech is intolerable, or that any curtailment is legitimate – before we can honestly discuss where the limits lie. Most importantly, we should agree that these decisions should be taken according to universal rules, consistently applied, and transparently resolved.

That’s the adult conversation – the one which does not deal in absolutes, which isn’t inspired by tribal loyalties, which doesn’t claim unshakeable moral knowledge – but which might, if we’re lucky, lead to a better and more sustainable status quo.