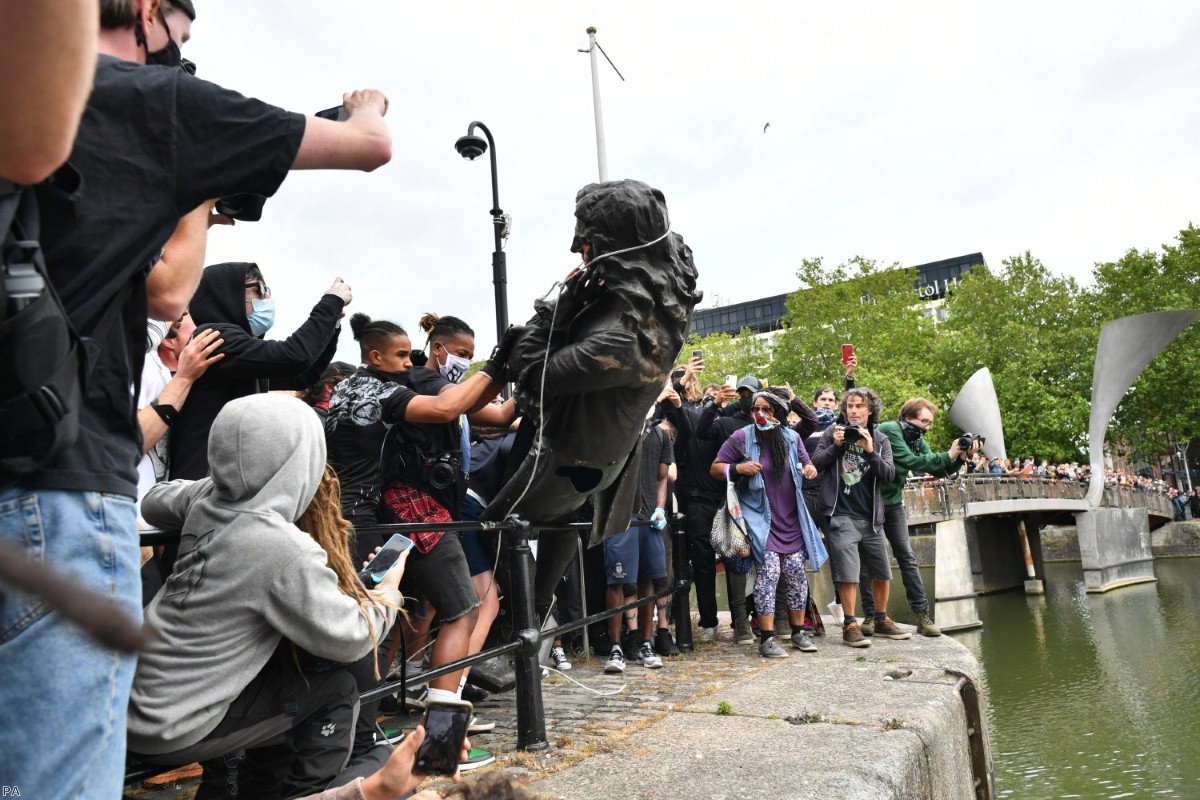 Colston row: It’s about discussing history, not rewriting it

The most curious aspect of the removal of Edward Colston’s statue on Sunday is that it didn’t erase history. The figure of the notorious slaver remains buried at the bottom of the Avon and yet here we are, talking about slavery, learning more about it, and in fact having a broader and more productive conversation than we did even during the 200th anniversary of slave trade’s abolition.

There’s a lot to learn from what happened at the weekend. Much of that is what it wasn’t about.

It wasn’t about rewriting history. Some fear that removing monuments and renaming buildings is a form of hiding, or worse, cleansing the past – that we can somehow fabricate the notion we have always been progressive. In fact the opposite is true: we do not tackle the past with silence.

But there is an even broader point. History, in all its glory and poison, is going nowhere. It exists and carries on into the future. Our cities, buildings, language and socio-economic hierarchies remain, all of them products of our history. It will take more than changing statues or street signs to alter that, and nobody is attempting to. You can no more erase history than undo slavery.

It wasn’t about ‘cancel culture’ either. Nobody demands total moral purity from historic figures and few of them are unproblematic. All societies are palimpsests. This is not about razing everything to the ground and starting from scratch. Somewhere we draw a line. So when do we repair things and when do we remove them? The point is not to give definitive answers but to discuss them – and that requires a national conversation we have so far refused even to begin.

Really, then, this is about understanding who we were and are.

Much of this is about teaching and understanding history. School syllabuses too often decontextualise Britain’s past or omit crucial elements altogether. In some ways misremembering is worse than not learning. Slavery, in particular, is often cast not as atrocity but celebration, a story focused on its triumphant – and, for Britain, supposedly trailblazing – abolition.

Indeed, the response is frequently defensive, as though we have nothing to be ashamed of at all. That is dangerous. A statue in a town square is just a symbol, and symbols can be misinterpreted or misappropriated. Something on a pedestal connotes honour, and if we want it to be a badge of shame we must make that explicit. Many things in life demand nuance. Slavery should not.

In schools and museums we encounter history as a neat, if subjective, curation of the past. But it is in fact everything that has ever happened, and it doesn’t stop. Although we cannot change the past, we can confront it in new ways – and part of that confrontation is the process of rejecting, challenging and rebuilding. What happened on Sunday, too, is now part of history.

This is also about the teaching and understanding of empire. As the Brexit debate illuminated, the British Empire remains a source not of national disgrace but pride. For 300 years, British commentators have condemned slavery and endorsed imperialism. In 2002 Boris Johnson wrote that “the problem is not that we were once in charge, but that we are not in charge any more”. In fact, slavery and empire are not only inextricable, but dependent on the same mindset. It is instructive that the statue celebrating Colston was erected almost 90 years after the slave trade ended.

Politicians’ response to the statue illustrates the problem. Ministers have fallen over themselves to condemn what happened in Bristol, even though no-one was violent, no-one was injured and no-one was sold. The focus has been on the damage to property rather than the current oppression which motivated it.

Almost no-one in government has thoughtfully examined why the statue was there to begin with, why it had remained so long and why it had proven so hard to remove lawfully. Johnson showed more outrage at Colston’s removal than he ever has at the empire which facilitated his crimes. Priti Patel called it a “distraction” and demanded harsh penalties for those responsible – something she would never have said about, for example, swastikas in post-war Germany. Removing those, of course, was not a distraction from tackling the Holocaust, but fundamental to it.

Responses on social and traditional media have also proved instructive. Some have been facetious, asking why we do not burn down the Colosseum, also the scene of slavery and oppression. Others have sought to trivialise Colston’s crimes, implying that we should judge people by the standards of their time, which, of course, fails to appreciate the opposition to slavery even then. This is not just a theoretical problem about addressing the past: it is key to what still happens now.

The line from Windrush can be traced back to slavery. It cuts through centuries of normalised racism. If we do not even confront oppression from the 17th century there is little hope of confronting it in the 21st. Time and again politicians and commentators repeat the dismissive line that ‘the UK is not a racist country’. We can’t begin to solve a problem if we don’t accept it exists.

Perhaps it might be useful to learn, for once, from other countries. Former Soviet states have moved their communist statues to outdoor museums and placed them in their historical context. African and Asian countries have changed the names of colonial-era cities and promoted indigenous languages. And Germany has memorialised thousands of streets and monuments. Germany, of course, is not defensive about its past. In Britain we find it easier to accept that country’s crimes than our own.

Of course we must preserve the past – but too often that means not learning from it, or preserving only certain bits of it. There are also times when preserving the past means just that: keeping it alive in the present.

Perhaps the most revealing statement about Sunday came from the chancellor. He denounced the “vandals”, and declared that “they perpetuate a dangerous lie: that the temporary excitement of destruction is the same thing as change”. The problem is that the protesters were not attacking a statue but white supremacy. We can’t spend another hundred years tinkering around the edges with it. For some things to change, they must be destroyed.

What happened on Sunday is not going to materially improve anyone’s life, but nor is it a distraction or unimportant. Each monument of this kind is a reminder of very recent dehumanisation, and its removal goes some way to heal an open sore. In the end, you cannot rewrite history, but you can attempt to right wrongs and do things better. The only way we can accomplish that is by talking about it. That process has never happened before. It may now.