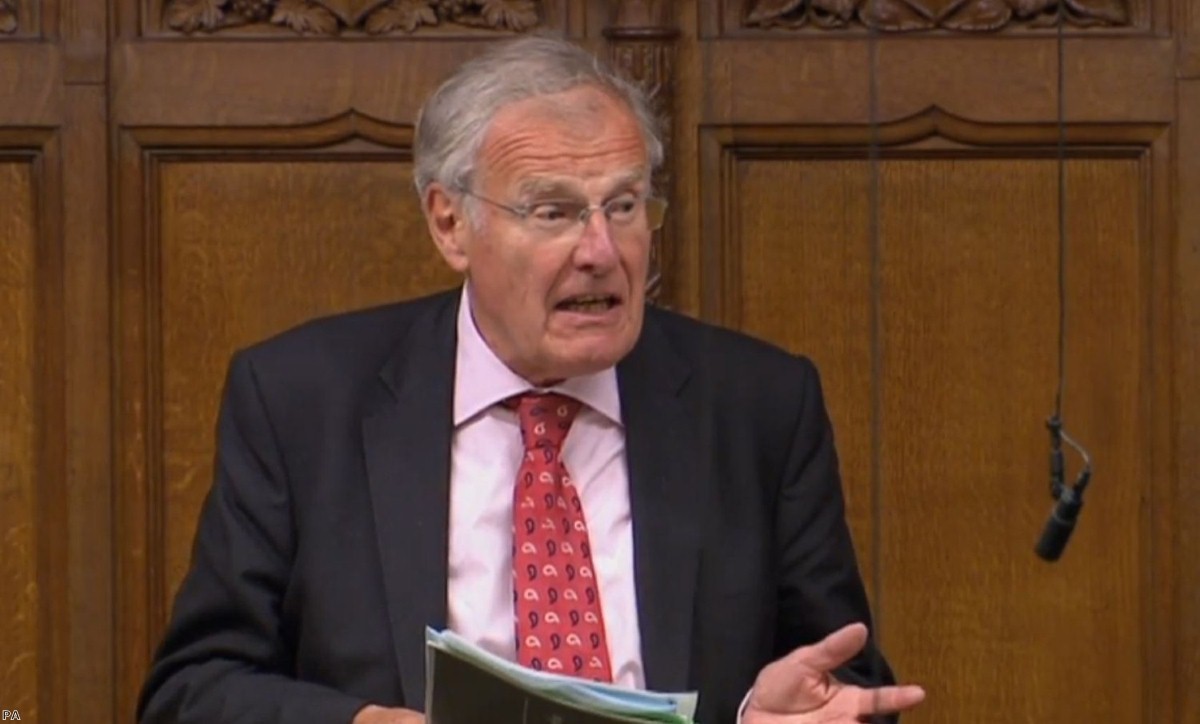 Why is everyone angry at Christopher Chope?

Because of one single word. Last week, he shouted "object" in the House of Commons at the second reading of the voyeurism (offences) bill. This is a private members' bill introduced by the Liberal Democrat MP Wera Hobhouse, which the government had announced it would support. Chope's objection meant the bill could not continue to the next stage of the legislative process.

What would the bill do?

The bill would amend the Sexual Offences Act 2003, so that voyeurism would cover 'upskirting' – defined in the Bill as photographing someone's underwear, genitals or buttocks under their clothing in circumstances where the underwear, genitals or buttocks would not otherwise be visible. A person who took a photo like this would be guilty of voyeurism if he acted for the sexual gratification of himself or someone else, or if he intended to humiliate, distress or alarm the victim.

Why was the bill introduced?

It's the result of a campaign by Gina Martin, who was watching The Killers play at the British Summertime Festival in 2017 when a man stuck his hand between her legs and up her skirt and took pictures of her crotch. She grabbed his phone and ran to police officers nearby, only for them to say there was nothing they could do.

Were the police right to say that?

Probably not, no. At present English law has no specific offence which covers upskirting, but there is a common law offence called 'outraging public decency'” which has been used to prosecute upskirting cases.

'Outraging public decency' sounds a bit archaic. Isn't upskirting an offence under the Sexual Offences Act 2003? No. Some people have claimed it's already sexual assault, or voyeurism under the existing law. This is just nonsense. Sexual assault requires the victim to be touched, while the existing offence of voyeurism requires the victim to have been observed doing a 'private act'. Gina Martin, for example, was certainly not doing a 'private act' in attending the British Summertime Festival.

But if outraging public decency applies, can't we just use that offence?

In most cases, yes. But there are a number of problems with it. The most important is that outraging public decency requires there to have been at least two persons present (other than the offender) who were capable of seeing what happened. So while it could be used in a case like Gina Martin's, it couldn't be used where the victim and offender were the only people present, for example where the offence takes place on an otherwise deserted street, bus stop or railway platform.

What are the other problems?

Outraging public decency is an offence against the public. Upskirting is a sexual offence with a specific victim. Amending the definition of voyeurism would recognise this, and could allow upskirters to be placed on the sex offenders' register, which is not possible at present. Specific legislation might also help to make it clearer to victims, police officers, and potential offenders that this is a serious criminal offence and punishable as such.

Don't some of these 'other problems' sound like academic quibbles or using the law to 'send a message' rather than making an actual change?

Acknowledging that the person who has been upskirted is themselves the victim of a sexual offence is an important point of principle, not an academic quibble. In any case, if the offence of outraging public decency actually covered all cases of upskirting, then perhaps we could live with some of these problems and seek other solutions to the rest. But it doesn't, so it needs to be fixed.

Creating criminal offences is a serious business, though. How do we know the bill has been drafted properly?

We can be reasonably confident about the drafting, because it is a copy of a law that has been in force in Scotland since 2010. But it could not have become law on Friday if Christopher Chope had not objected. It would simply have passed to the next stage of the legislative process, where its provisions could have been scrutinised further. The government had already indicated it wanted to make amendments, because as the bill is currently drafted a conviction for voyeurism by upskirting wouldn't result in the sex offenders' register legislation applying.

Why did Scotland get there first?

In 2009, Scotland passed a new code of sexual offences – the Sexual Offences (Scotland) Act 2009. It included an offence of voyeurism which was modelled on the English offence. While this legislation was going through parliament, it was pointed out that the voyeurism offence (like its English counterpart) didn't cover upskirting. The Scottish government accepted this, and quickly amended the Act to ensure that it would.

Why does Christopher Chope oppose an upskirting law?

It seems he doesn't, at least now. He has an unusual relationship with private members' bills, objecting to lots of them but also tabling lots himself (he has pointed out that four of the other bills that were blocked from further progress on Friday were his own). Following the wave of criticism he received, he's since said he supports the bill and even criticised the government for not coming out in support of it earlier.

So what happens now?

Despite Friday, it’s now certain that parliament will pass legislation against upskirting. Not only had the Government already indicated its support for the Bill, senior Conservative politicians – including Theresa May – threw their weight behind it following Christopher Chope’s objection. Earlier today, the government introduced its own voyeurism (offences) (no 2) bill. We can safely assume that Chope himself, clearly bruised by the barrage of criticism he received, won’t be shouting “object” when this bill is discussed in the Commons.

James Chalmers is Regius Professor of Law at the University of Glasgow. You can follow him on Twitter at @ProfChalmers.