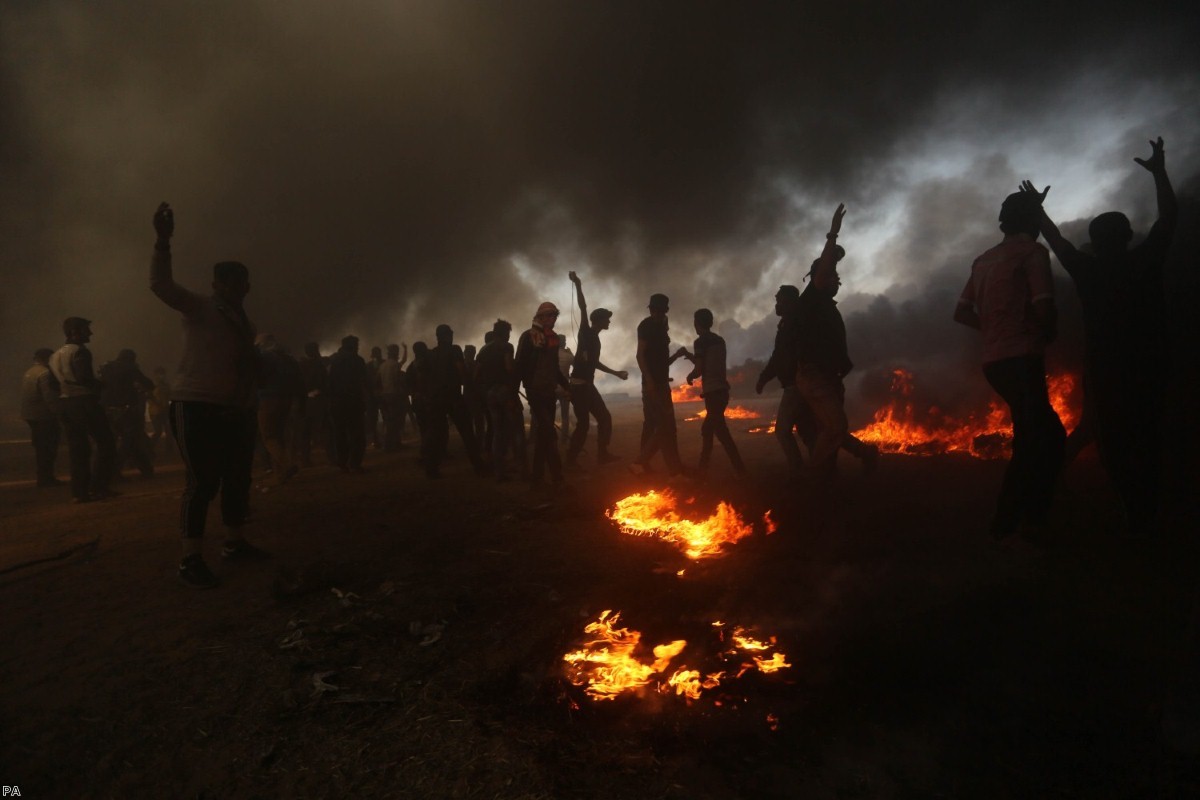 In the Bloody Sunday massacre of 1972, British soldiers shot 28 Northern Irish protestors, 14 of whom died. Some of the demonstrators that day threw stones, and there were many IRA members at the protest. After the incident, the British parliament established an inquiry led by Lord Widgery. The Widgery Report sided with the army's account, putting most of the blame on the protestors who took to the streets despite a ban on public marches and claiming that some of them fired weapons and handled bombs. As a result, no disciplinary action was taken against the soldiers.

Today, the Widgery Report is regarded as a cover-up exercise that compounded the injustice of the killings themselves. Years later, a second, more thorough inquiry, led by Lord Saville, demolished most of Widgery's conclusions and determined that none of those shot posed a threat to life. In 2010, prime minister David Cameron formally apologised for the killings.

In the recent series of protests in Gaza that culminated on Monday May 14th, Israeli soldiers killed around 100 demonstrators and wounded at least 3,600 with live fire. Most demonstrators were entirely peaceful, while some used slingshots to throw stones, threw Molotov cocktails or flew burning kites. There were undoubtedly many members and sympathisers of Hamas and Islamic Jihad among the crowds. But it seems the vast majority of those shot by Israelis did not pose an imminent threat to life, the only grounds that could justify opening fire on anyone.

The Israeli army announced an internal investigation – described by the leading Israeli human rights organisation B'Tselem as "pure propaganda" and part of Israel's standard "whitewashing toolkit", based on the record of previous inquiries.

After Gaza's 'bloody Monday', calls for an international investigation multiplied. A few days later, on May 18th, the UN Human Rights Council (UNHRC) in Geneva passed a resolution setting up an international commission of inquiry. Given its experience of Bloody Sunday and of the importance of genuine investigations, one might expect Britain to support the UN investigation. However, despite an earlier call by UK Middle East minister Alistair Burt for some form of a UN inquiry, Britain abstained in the vote. Moreover, it issued a statement taking an outright negative stance against the UN probe, in which it made some astonishingly poor arguments to justify that position. It was unusual for the usually well-informed Foreign Office.

The UK claimed the UNHRC resolution is imbalanced and does not explicitly call for investigating actions of Hamas, so therefore "an investigation of this kind would not provide us with a comprehensive assessment of accountability". In fact, the resolution clearly calls for investigation of "all alleged violations" of international law – i.e. by any side. The UK must also be aware that previous UN probes into Gaza violence examined misconduct by all parties, including the Palestinian militant groups, irrespective of how exactly the UNHRC resolutions were phrased.

The most recent UN Commission of Inquiry was established in 2014, after the last major Israeli military operation in Gaza that left over 2,300 dead. Just like today, the then British foreign secretary Philip Hammond initially opposed the inquiry. However, once the Commission led by the American jurist Mary McGowan Davis delivered its report, widely seen as solid and impartial, the UK eventually voted in the UNHRC to welcome it, together with all other EU member states. It looks as if the UK government forgot that inquiry in the meantime and reverted to its a priori negative position.

Secondly, instead of a UN investigation, the UK calls on Israel to carry out a domestic inquiry which "should include international members". But given the strong political and public backing in Israel for a harsh military response to the Gaza protests, it is completely unrealistic to expect anything remotely as impartial as the Saville inquiry into Bloody Sunday. Israel's recent self-investigations have amounted to little more than diversionary manoeuvres used to absolve the army and government of any serious wrongdoing, as documented in multiple reports by B’Tselem, Amnesty International and the UN. Instead of helping ascertain the facts, the domestic inquiries served to promote a one-sided version of the events.

Adding international experts to the inquiry – selected or approved by Israel – would be of little help given the availability of a large pool of partisan experts – ideologues ready to back Israel's viewpoint without much questioning. One such inquiry in recent years was the Turkel commission – set up after Israel's deadly raid on an activist flotilla to Gaza in 2010 – which involved a limited role for two international observers. One of them David Trimble, the Northern Irish politician known for his strongly pro-Israel views. While that commission made some useful recommendations for improving the Israeli investigation process (ones which were never fully implemented), it predictably backed the convenient Israeli account – blaming the flotilla, exonerating the soldiers – at odds with the findings of international investigations into the incident. It cannot serve as a positive example.

Even that kind of a commission is not on the table in today's Israel, which has shifted politically further to the right and whose violent response to the Gaza protests is vocally cheered on by the Trump administration. The UN inquiry seems to be the only official avenue available to get closer to the truth about the Gaza bloodshed.

The Foreign Office, which has closely monitored previous domestic investigations and appealed to Israel to conduct them seriously, is unquestionably aware of all this. How can the UK then seriously propose that a domestic inquiry is more likely than a UN investigation to deliver credible facts?

Since the vote on the UN inquiry, the UK government has already faced well-justified pushback in the parliament, including from some Conservative MPs. The Foreign Office stance is even harder to defend, in contrast with its record of support for UN probes into other conflicts. For example, in recent years at the UNHRC, the UK has supported UN investigations on Myanmar, South Sudan, Burundi, DRC, Eritrea, Sri Lanka, Syria, Libya, North Korea and even Yemen. It also voted at the UN Security Council to refer Sudan, Libya and Syria to the International Criminal Court – a more serious measure of accountability.

One day Israel will hopefully have its own Saville inquiry into the Gaza killings, as well as other injustices against Palestinians. But with Israel’s occupation morphing into a permanent domination over Palestinians and its politics moving ever further to the right, that day is nowhere near. In the meantime, UN investigations – together with the work of independent human rights NGOs – are the best hope of establishing the facts and promoting international accountability. The UK should support them rather than buy into Israel's Widgery-style camouflage.

Martin Konecny runs the European Middle East Project (EuMEP), a Brussels-based NGO. You can follow him on Twitter.