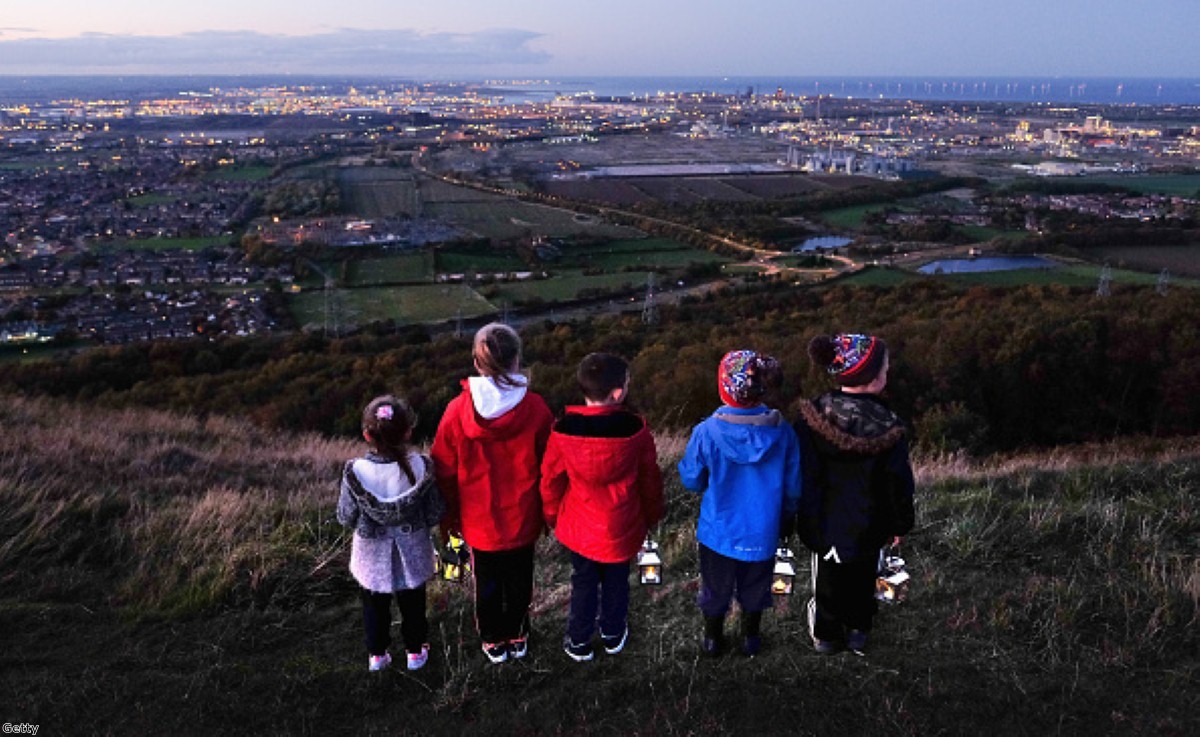 Shocked and afraid: The people of Redcar feel abandoned by Cameron

As dusk fell over Teesside on Saturday evening, a procession of torches lit up the skyline as local people walked to the top of nearby hills to show solidarity with the area's steelworkers.

The loss of 1,700 jobs after SSI UK, which owns the Redcar steelworks, went into liquidation, has been devastating not only for the workers at the plant but for the community as a whole.

Even before the steel crisis hit, Redcar and the surrounding areas were blighted by high unemployment. People here know only too well what can happen to a working class community when an industry collapses.

The North East has been shattered by pit and shipyard closures for decades, with some towns and villages yet to fully recover. Unemployment is higher in this region than in any other in the country and recent figures show that of all 12 UK regions, the North East was the only one that saw a fall in approximate Gross Value Added (aGVA), generated by the local activity of businesses.

"They [the government] are happy for the working class to do the dirty work, like going down the mines or into the steelworks but when we need their help they sell us down the river," Mr Jackson, a committee member of a social club near to the Redcar steel plant, tells me.

"They talk about the 'Northern Powerhouse' but that doesn't reach past Manchester, we don't get anything around here."

It's early afternoon and Jackson says the club would normally be full of steelworkers coming in for a drink after their shift finishes. Today it's almost empty.

"When the lads do come in they tell me they don't know what they're going to do. They've got mortgages and families but what now? Some of them have dropped from £600 per week to £70 job seekers allowance, almost overnight." Jackson says.

The quiet anger in Jackson's voice is echoed by many. There is a feeling among people in the area that the government has allowed the steel industry to collapse without doing enough to help. The visit to Britain by the Chinese president last week has felt to some like rubbing salt into a wound.

China's role in the steel crisis has been well documented yet, as one person pointed out, the prime minister was happy to roll out the red carpet for Xi Jinping but hasn't even bothered to visit Redcar to see the devastation of the job losses for himself.

The government was quick to announce a fund of £80m to retrain the workers, but that has already been reduced to £50m because £30m of that was actually for redundancy payouts. Four weeks since the plant closed people are still waiting to be told how to access the fund.

"None of that money has come through yet, it's really frustrating," says Paul Warren, who has worked at the plant for 26 years and is the multi-union chairman.

"The workers need someone to guide them through this, but that's not happening.Things don't add up at the moment, I don't understand why the government didn't help. Even if they'd just kept it [the steelworks] going for 12 months to try and find a buyer – I think people would've accepted that. If you compare the cost of doing that, to what they will have to pay in benefits and the cost of returning the plant to a green fill site, it makes no monetary sense."

Research by the Joseph Rowntree Foundation showed that a decade after coalfield areas were hit by pit closures they continued to be characterised by high unemployment, long-term sickness and poverty. It found that government initiatives had only a partial effect in transforming the areas.

This is something the people of Redcar have seen for themselves and it makes them even more fearful for their own futures. Anna Maven is a teaching assistant in an ex-mining village in Sunderland. Her husband, Paul, worked at the Redcar steelworkers for four years.

"The community where I work was totally destroyed [by the pit closures], you see families with three or four generations unemployed. Before, they would have been working in the mines and spending their money in the local pubs and shops. There aren't any shops or pubs in these places anymore, there's nothing," Mavern, who writes a blog about her family's experience, says.

"I can only imagine what the impact will be in Redcar. It all happened so quickly, Paul received less than one month's salary as a redundancy payout and that's got to last us. They talk about 1,700 people losing their jobs but there will be far more than that affected by this."

Everyone here wants to know why the government didn't step in earlier, they point to the European governments that have taken action to support their steel industries and ask why ours couldn't do the same. Some wonder if the plant was allowed to go under because it's in the north-east and not in a Tory heartland. Others believe it was simply down to incompetence.

#SaveOurSteel | At parliament steelworkers hear the steel industry can be saved, but it needs government action pic.twitter.com/6OQfxEhsXe

This week, steelworkers from across the country travelled to the House of Commons to meet with MPs before an opposition day debate on the future of the steel industry. They arrived in London with the hope they could urge the government to take action to prevent further job losses. Whether that will happen remains to be seen.

As for the people of Redcar, it's clear that the collapse of the steelworks is more than just a loss of jobs, it's a hammer blow to the whole community. And one which many fear is going to take years to recover from.