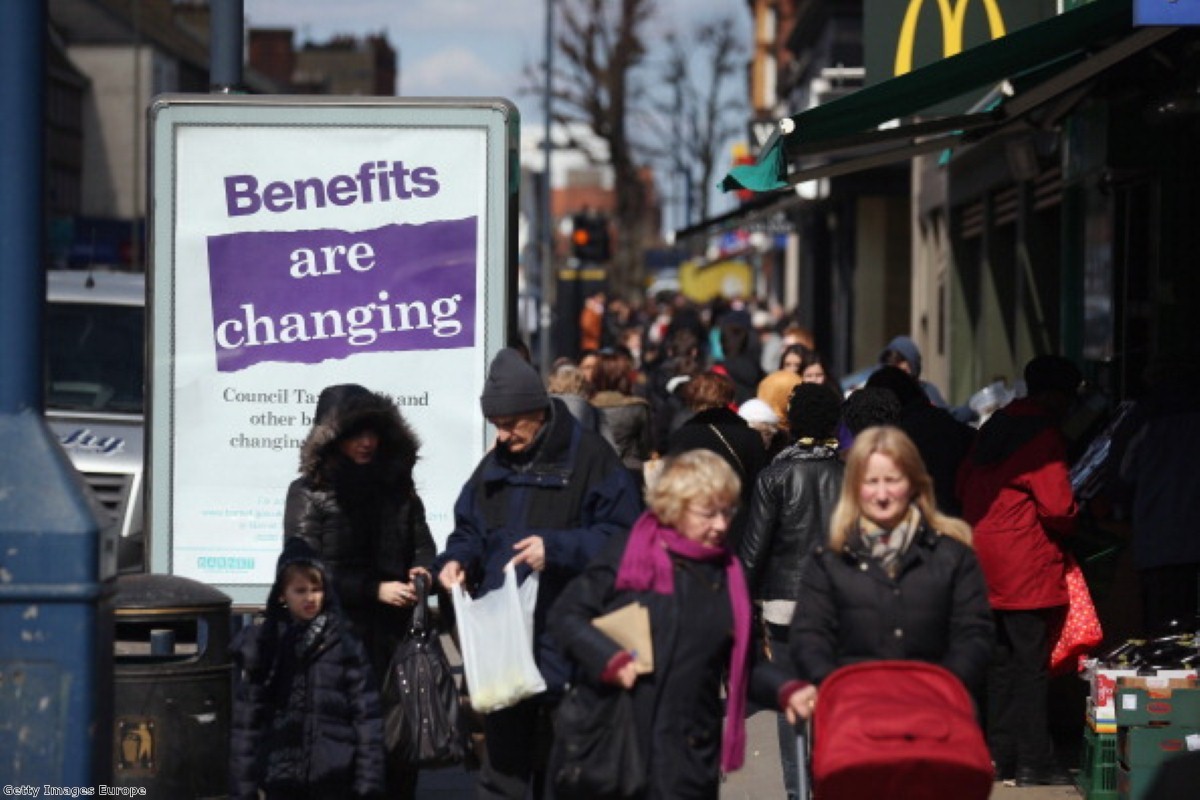 The proposal to ban EU migrants who are in work from receiving tax credits is the latest in a long series of changes which cut entitlement to social security. The suggestion, which was made today in a report from Eurosceptic think tank Open Europe and a version of which has already been aired by Labour’s Rachel Reeves, would mean low-paid workers from EU countries lose an average of £55 per week.

The story is being framed in terms of immigration. But the proposals are at least as important to another debate happening right now: that of the future of our social security system. These proposals are emblematic of a social security system in which eligibility continues to be further and further restricted, and conditionality further and further increased. They are symptomatic of an ongoing failure of our social security system to act early to prevent crises from occurring, rather than dealing with the consequences. In this case, the root cause of the 'problem' of increasing tax credit spend – namely, the fact that real wages have been in decline for over six years – is ignored and instead the consequences are being tackled in an incredibly short-termist way.

The news of these recommendations made me think back to Kazia, a trained psychologist who had worked as a scientist in Poland and was one of the first people I met when I started working at Community Links. Kazia came to our advice service for help because, while claiming Jobseekers’ Allowance, she had been told to drop out of an English for Speakers of Other Languages (ESOL) course which was taking more than 16 hours per week: hours that she should have been spending applying for jobs in coffee shops. Kazia wanted to improve her English so she could continue as a professional scientist in the UK. When she refused to drop out of the course, she was sanctioned.

Kazia’s story reveals the nonsensical failures of a short-termist social security system. If the system had supported her to use her skills in Britain she may by now be flourishing and contributing more to society and the economy. Instead it aims for short-term wins: a job in a coffee shop whose low wages would have had to be topped up by tax credits, or even a sanction that could have helped to improve DWP’s statistics of the numbers of people leaving unemployment benefits.

Since I met Kazia in February, she will have been subject to many further attacks on her benefits. If she was claiming Housing Benefit while she searched for coffee shop jobs, that will now have gone. Her children will now be expected to be able to do without child benefit for their first three months in the UK. Now the proposal is to restrict her eligibility for Working Tax Credits even when she does get a job. These various attacks come despite huge net benefits that immigrants bring to the UK economy.

This trend of increasing conditionality and restricted eligibility is not restricted to migrants. In the last few months we've seen a doubling of the number of days that jobseekers have to wait for eligibility for JSA; we’ve seen parents with children as young as one forced to look for work in return for their benefits; and we’ve seen plans for a 2-year freeze on in- and out-of-work benefits for 10 million working families. What’s more, there is every sign that this trend could get worse. Osborne’s forecasts of continued austerity in the next parliament, a media and public discourse which continues to harden public opinion against claimants, and an ongoing failure to fix underlying causes of social security spend – by building houses and creating well-paying jobs – all mean that our social security system is heading in the direction of much more short-termism.

The argument that we need to make our welfare state less generous leads us to an end-point of a system which provides no security, which pays far too little to live on, which traps people in poverty, and which allows costly problems to spiral out of control. We can already see this beginning to happen. Last week, the IFS declared that the Coalition’s welfare reforms, despite making life incredibly tough for millions of households, have saved just £2.5bn of an expected £19bn.

Our research, to be published in Westminster next Tuesday, shows how the cumulative impact of the welfare reforms has been to push people into survival mode, squeezing them to focus on short-term, day-to-day getting by and preventing them from being able to make long-term positive changes to their lives. The knock-on effects of this end up costing money in other public sectors: in NHS treatment for stress and depression, in services to deal with reduced community cohesion and in tax credits for jobs that don't pay enough to live on.

Instead of further attacks on benefits, we need a social security system that acts earlier, preventing problems before they arise, and works to make sure people are both secure and ready to seize opportunities. For Kazia this would mean helping her to use her skills and contribute more to the UK economy, and if she does end up in a coffee shop, it would mean paying her tax credits to allow her to focus on longer-term goals, rather than day-to-day survival. More broadly, it means we need to see social security as an investment in people that will pay off many times over in the long-term. It means we need to rethink the principles underlying our social security system, and how it can become an enabling system than encourages people to thrive and the economy to flourish.

Liam Crosby is Policy and Public Affairs Officer at Community Links, a charity providing advice and employment services in East London. He writes in a personal capacity. Follow him on Twitter.