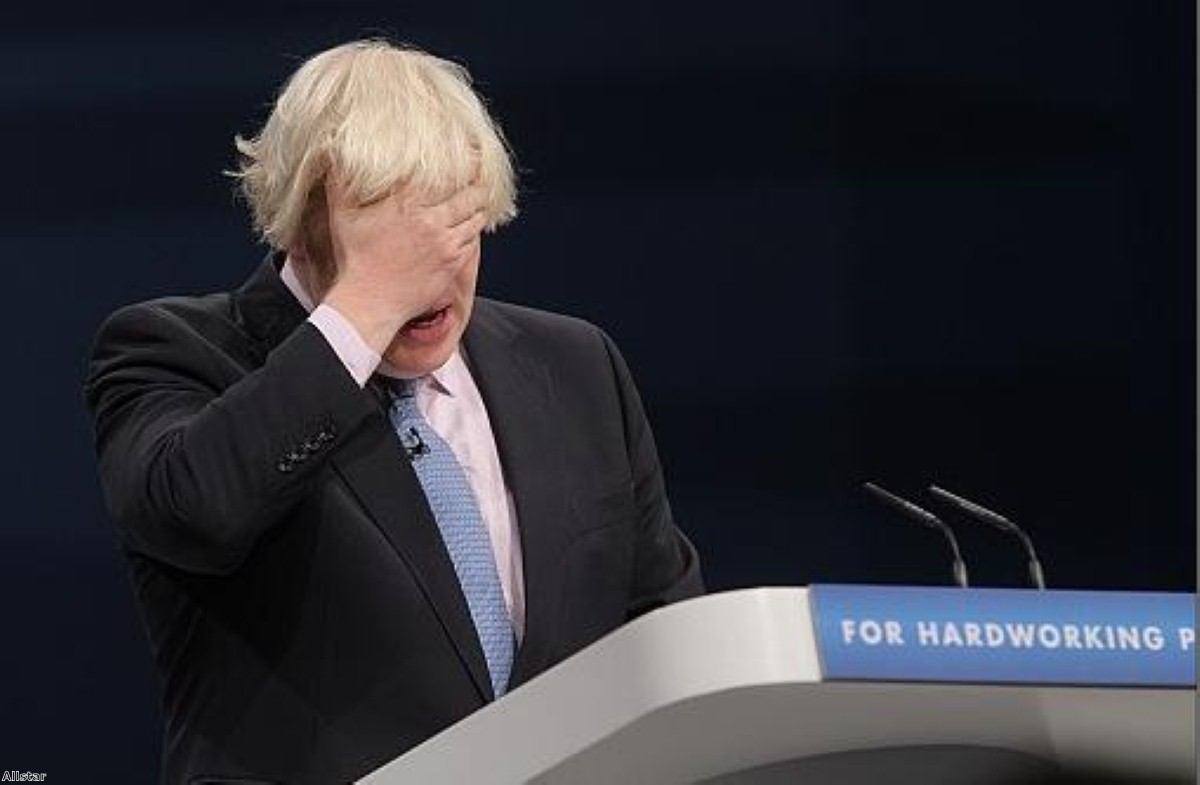 Boris has begun his awkward transition from a seriously jokey politician to a serious politician who also makes jokes. It's not quite as appealing – but is still funnier than anything else on offer.

The mayor of London's regular conference gig was important, once upon a time, because he was the most powerful Conservative in executive office. Now David Cameron is in No 10 all that has changed, of course. But the constant leadership speculation which follows Boris around like a lobbyist's aftershave means the Dave-baiting can continue in earnest.

This year was no exception. Boris began with a bombshell, emerging from an innocent-enough anecdote about a "tete-a-tete" with Alain Juppe, the French bigwig. He was prime minister at the same time as being mayor of a big French city, Boris explained. "I think it's the kind of thing they do in France," he said, before adding: "It's a very good idea."

So much for subtlety! Tories in the audience shrieked with laughter at the sheer brazenness of it all. A particularly enthusiastic Conservative seated directly behind me was very impressed. "HA HA HA HA HA!" he shouted. My ears are still ringing.

Dave-baiting comes, this year, in the context of Cameron giving Boris permission to run for parliament in 2015 while still also serving in City Hall. So after that whopper of an opener the impact was diluted by two name-checks of how marvellous the prime minister is. But Boris remains a potent force in the Tory party, which completely packed out the huge conference hall in the Manchester Central complex.

They know what to expect from Boris besides his floppy haircut. And, it's true, they got a lot of it this year. He is like no other politician. Who else would check facts with his adviser in the front row? ("Rick, how many new homes have we done so far?") Who else would claim credit for an increased birth rate because of the Olympics, or ponder "what are the people of Bournemouth doing when they are not producing prodigious quantities of lubricant?" The mayor of London is superb at this sort of thing.

He is also, increasingly, being seen as a credible successor to Cameron for the Tory party leadership. And this creates a huge question-mark about the sustainability of his slapdash approach to the job. Some believe Boris has to manage a transition towards a more serious approach without losing his trademark panache. It's a tough challenge – and one he might just have begun attempting today.

There was a sense he saw this coming. "Please take your seats," he wafted at the beginning, "we're got a lot to get through". After the early jokes he seemed to get bogged down. "This is where the speech gets tricky," Boris muttered. His argument was that young people are fed up with "menial" jobs – and that the immigrants many Conservatives are fed up with actually offer a very positive alternative.

This audience which for years had eaten out of Boris' hand, now seemed distinctly uneasy. "I'm conscious I've spoken very honestly about this," the mayor admitted, sensing the drift against him. "I'll probably get into trouble," he muttered. "I don't mind, it's my job."

He will mind, though. We had been treated to a glimpse of a new kind of Boris, the version who is obliged to confront awkward truths and struggles to win over a dubious crowd.

It was far more engaging, funny and entertaining than any other speech in the entire conference season. But this was a diminished Boris nonetheless: by his own standards, he has slipped.

It's the price he has to pay for credibility – and as the scope of his vision extends from London to incorporate the entire country, it's one he is clearly prepared to pay.