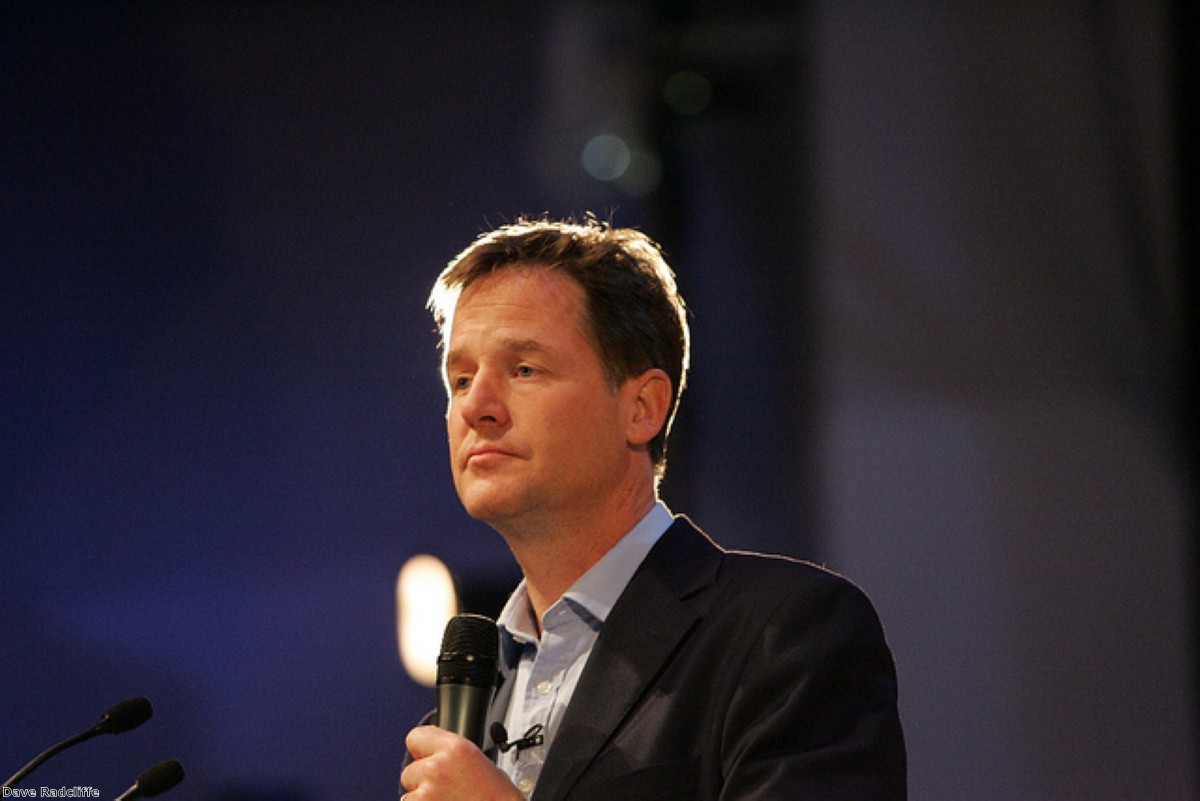 It must be wonderful being Nick Clegg. I know this isn't a popular point of view, but I feel it really must be something special.

Watching him give his conference speech on Wednesday, I was struck by a man who absolutely believed in everything he was saying. He's not known for his honesty I know, but I really got the impression that for that hour at least, he genuinely believed in every word.

I mean it was all nonsense obviously. His claim that he has battled every day to stop right wing Tory policies is obvious and transparent hokum. He's done nothing of the sort. But you could tell that he believed it. You could tell that, in his own mind at least, it all made sense.

It was a marvellous construction. A fantastic world in which the public are endlessly grateful for all the hard work he has put in over the past three years. An intoxicating idyll in which voters' main concern is that whoever wins the next election, Clegg must somehow be part of it.

But it was all a construction. The public are not grateful for the Lib Dems' influence on government. Far from it. In fact a poll this week found that an overwhelming majority of voters would rather anything but another five years of Clegg. Asked whether they would prefer a single-party government, 67% agreed and just ten per cent wanted another coalition.

And as for the Lib Dems' great influence in government? Forget it. The poll found that 51% thought the Tories had benefited most from the coalition while just 19% disagreed. Even worse, just one in three thought that Clegg had reined in the worst excesses of the Conservatives.

Now you may not agree with this. You may like Clegg, believe that the world really would fall apart if he stops being deputy prime minister. But the truth is the British public have had a good hard look at life under a coalition and they've decided they've had enough.

But Clegg has had three years to change that system and he's got precisely nowhere. And the reason for that, is however much the public may not be keen on the status quo, they are even less keen on the alternatives.

Ask most people whether our current electoral system is fair and they will tell you no. Ask them whether they would prefer a system of alternative votes with preferential ordering and they will look at you as if you're mad.

There was a brief time before the last election when it looked like we were finally entering a genuinely three party system. At the time it seemed very exciting. Three years later, the excitement has very much gone.

Of course you could argue that we're actually in a four party system. The rise of Ukip means the final result of the next election is harder to predict than ever. But while Nigel Farage's party may have an impact in splitting the vote, they still look as far away from winning parliamentary seats as ever.

The revelations this week about Farage's shady past can be easily brushed off, but footage of a senior figure shouting and attacking a journalist cannot.

There was a period about five years back when the BNP looked on the cusp of making serious progress. The far right party won two MEPs, one London Assembly member and even became the second biggest party on the Barking and Dagenham council. It didn't last. A series of scandals, disastrous public appearances by Griffin and a concerted effort from the three major parties mean that they are now close to extinction.

If Ukip don't quickly smarten up their image, the same could very easily happen to them.