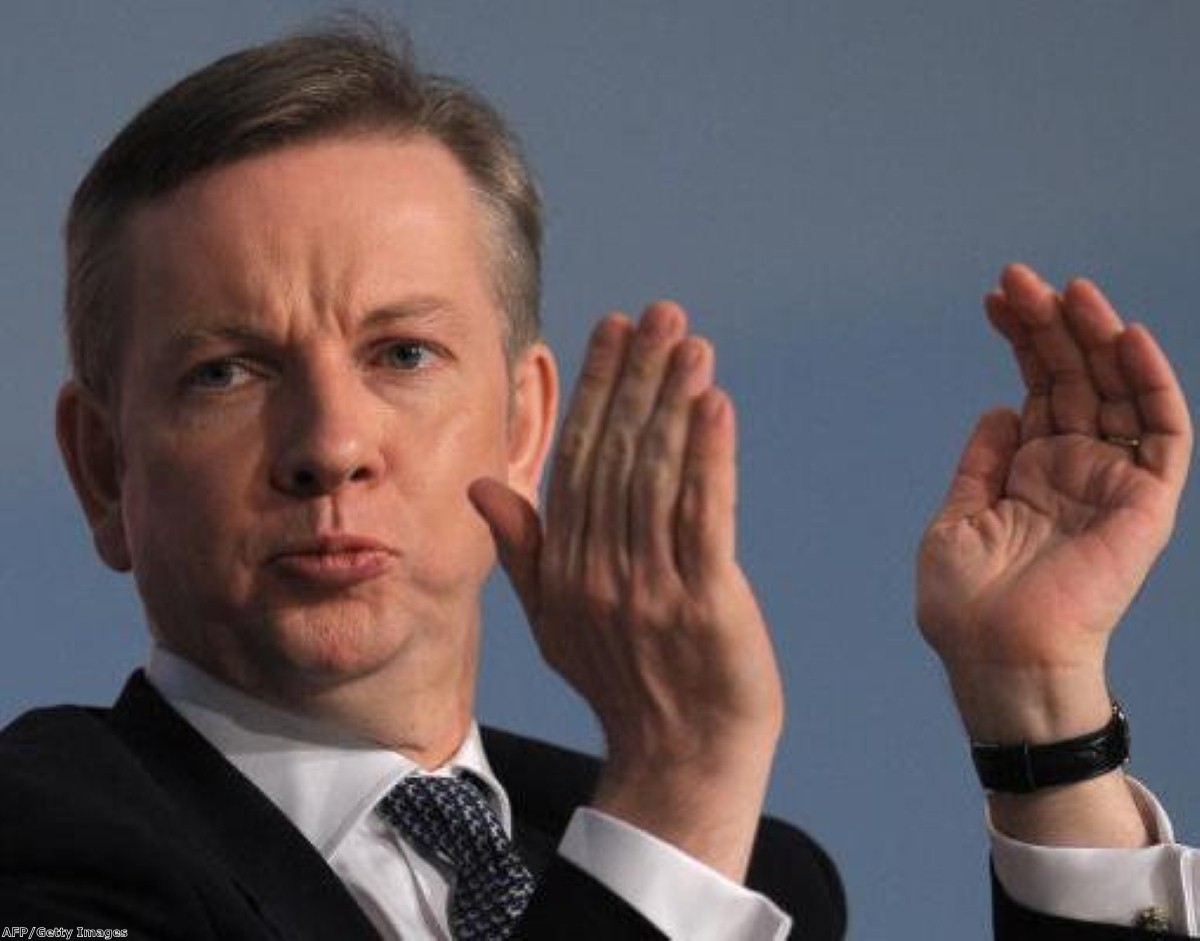 With your permission I should like to make a statement on the future of qualifications, school league tables and the national curriculum.

Last September we outlined plans for changes to GCSE qualifications designed to address the grade inflation, dumbing down and loss of rigour in those examinations.

We have consulted on those proposals and there is now a consensus that the system needs to change.

But one of the proposals I put forward was a bridge too far.

My idea that we end the competition between exam boards to offer GCSEs in core academic qualifications and have just one – wholly new – exam in each subject was just one reform too many at this time.

The exam regulator Ofqual – which has done such a great job in recent months upholding standards – was clear that there were significant risks in trying to both strengthen qualifications and end competition in a large part of the exams market.

So I have decided not to make the best the enemy of the good.

And I will not proceed with plans to have a single exam board offering a new exam in each academic subject – instead we will concentrate on reforming existing GCSEs along the lines we put forward in September.

Because there is a consensus that the exams and qualification system we inherited was broken.

Our first set of reforms were to vocational qualifications. They were allowed to become less rigorous options under the last Government. Alison Wolf’s report outlined how to improve the quality of vocational courses and expand work experience. It secured near universal support. It will soon all be done.

We’re also reforming apprenticeships. Under the last Government the currency of apprenticeships was devalued alongside every other qualification. The Richard report on apprenticeship reform will restore rigour, as Andrew Adonis has explained so powerfully.

GCSEs will now also be reformed in a similar fashion.

The qualifications should be linear, with all assessments normally taken at the end of the course. Examinations will test extended writing in subjects such as English and history, have fewer bite-sized and overly structured questions, and in mathematics and science there should be a greater emphasis on quantitative problem-solving. Internal assessment and the use of exam aids will be kept to a minimum and used only where there is a compelling case to do so, to provide for effective and deep assessment of the specified curriculum content.

Importantly, the new GCSEs will be universal qualifications and I expect the same proportion of pupils to sit them as now. This is something we believe the vast majority of children with a good education should be able to achieve.

But reformed GCSEs will no longer set an artificial cap on how much pupils can achieve by forcing students to choose between higher and foundation tiers.

Reformed GCSEs should allow students to access any grade while enabling high quality assessment at all levels. The appropriate approach to assessment will vary between subjects and a range of solutions may come forward, for example, extension papers offering access to higher grades alongside a common core. There should be no disincentive for schools to give an open choice of papers to their pupils.

I have asked Ofqual to ensure we have new GCSEs in the core academic subjects of English, maths, the sciences, history and geography ready for teaching in 2015.
These proposals will, I believe, achieve a swift and significant rise in standards, right across the country – equipping far more young people with the knowledge and skills they need to achieve their full potential.

Reforming qualifications alone is not enough to ensure higher standards for every child.

We also need to reform how schools are graded to encourage higher expectations for every student.

Existing league tables have focused almost exclusively on how many children achieve a C pass in five GCSEs including English and maths.

It encourages schools to choose exams based on how easy they are to pass, rather than how valuable they are to the student.

It causes a narrow concentration on just five subjects, instead of a broad curriculum.

And it focuses teachers’ time and energy too closely on just those pupils on the C/D borderline, at the expense of their higher or lower achieving peers.

o   the percentage of pupils in each school reaching an attainment threshold in the vital core subjects of English and maths;

o   and an average point score showing how much progress every student makes between Key Stage 2 and Key Stage 4.

The average point score measure will reflect pupils’ achievement across a wide range of eight subjects.

As well as English and maths, it will measure how well pupils perform in at least three subjects from the English Baccalaureate – sciences, history, geography, languages – and Computer Science, and in three additional subjects, whether those are arts subjects, academic subjects or high quality vocational qualifications.

This measure will incentivise schools to offer a broad, balanced curriculum, with high quality teaching and high achievement across the board. It will also affirm the importance of every child enjoying the opportunity to pursue the English Baccalaureate subjects.

By measuring average point scores rather than a single cutoff point, the new measure will also ensure that the achievement of all students is recognised equally, including both low attainers and high fliers.

And alongside today’s proposed changes to exams and league tables we’re also publishing our proposals for the new National Curriculum in England.

Over the last two years we have examined and analysed the curricula used in the world’s most successful school systems, jurisdictions such as Hong Kong, Massachusetts and Singapore.

We’ve combined the best elements of their curricula with some of the most impressive practice from schools in this country – and the result is published today, a new draft National Curriculum for the 21st century which embodies high expectations in every subject.

We are determined to give every child, regardless of background, a broad and balanced education – so that, by the time their compulsory education is complete, they are well equipped for further study, future employment and adult life.

So all of the current National Curriculum subjects will be retained at both primary and secondary levels – with the important addition of foreign languages, to be taught in Key Stage 2.

Our new draft programmes of study in core subjects are both challenging and ambitious – focusing tightly on the fundamental building blocks of study, so that every child has the knowledge and understanding to succeed.

A key principle of our reforms is that the statutory National Curriculum should form only part of the school curriculum, not its entirety. Each individual school should have the freedom to shape the whole curriculum to their particular pupils’ aspirations and priorities – a freedom already enjoyed by the growing numbers of Academies and Free

Schools as well, of course, as schools in the independent sector.

So programmes of study in almost all subjects – other than primary English, mathematics and science – have been significantly slimmed down.

And we’ve specifically stripped out unnecessary prescription about how to teach and concentrated only on the essential knowledge and skills which every child should master.

In maths – learning from East Asia – there’s a stronger emphasis on arithmetic and more demanding content in fractions, decimals and percentages to build solid foundations for algebra.

In the sciences there’s rigorous detail on the key scientific processes from evolution to energy.

In English there’s more clarity on spelling, punctuation and grammar as well as a new emphasis on the great works of the literary canon and in foreign languages there’ll be a new stress on learning proper grammatical structures and practising translation.

In geography there is an emphasis on locational knowledge – using maps and locating key geographical features from capital cities to the world’s great rivers.

In history there is a clear narrative of British progress with a proper emphasis on heroes and heroines from our past.

In art and design there’s a stronger emphasis on painting and drawing skills, in music a balance between performance and appreciation.

And we have replaced the old ICT curriculum with a new Computing curriculum, with help from Google, Facebook, and some of Britain’s most brilliant computer scientists – and we have included rigorous Computer Science GCSEs in the Eng Bac.

With sharper accountability, a more ambitious curriculum and world class qualifications, I believe we can create an education system which can compete with the best in the world – a system which gives every young person, regardless of background, the high quality education, high aspirations and high achievement they need and deserve.