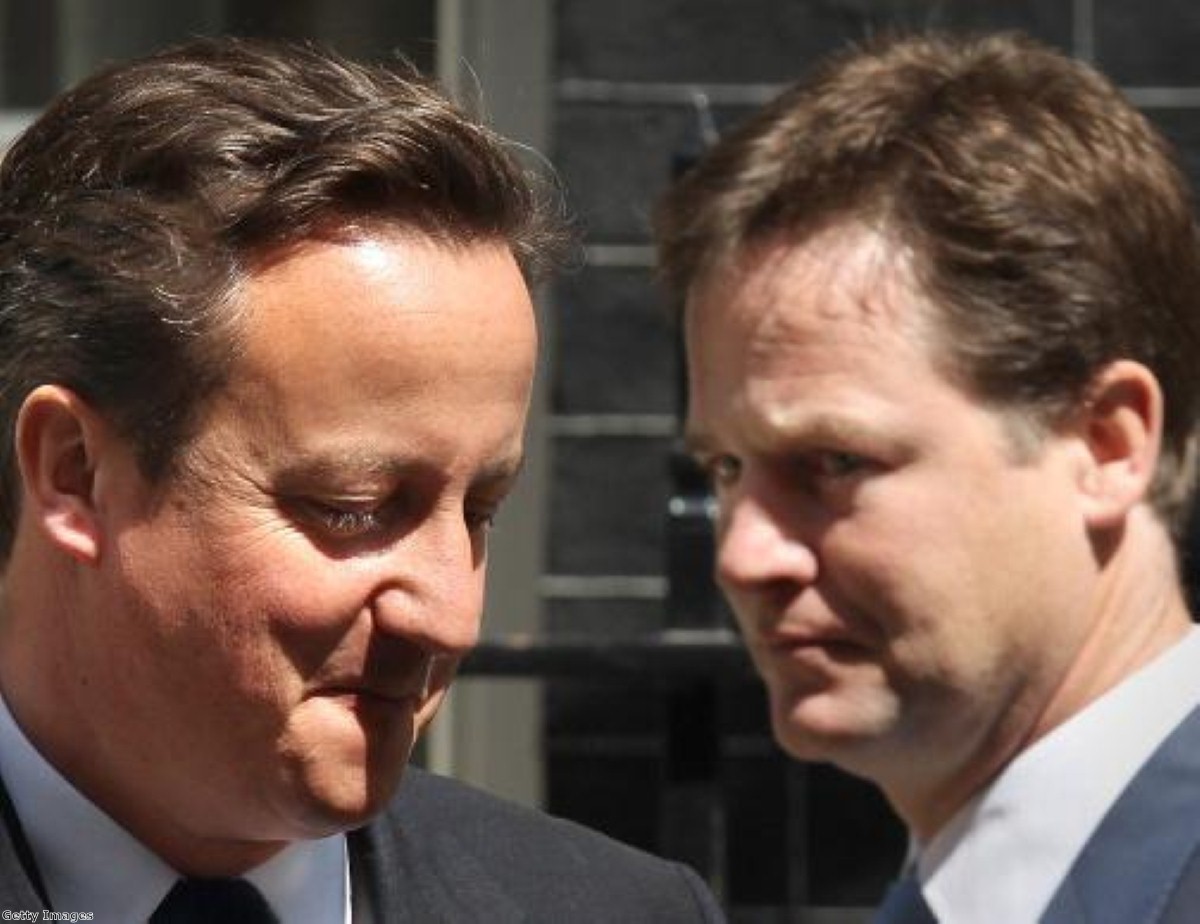 The week in review: The omniterrible coalition

'Omnishambles' is sooo last year, so this week we're offering your choice of words. Omnimess, omnimuddle, omnifiasco all seem to fit the bill for 2013.

With just two full calendar years left in government together, David Cameron and Nick Clegg are fully aware of how it's going to be increasingly difficult to hold their two parties together. So to try and inject some new life into their project of governing "in the national interest", the new year spirit of optimism and renewal was seized on as the perfect time for a midterm review.

What was once fresh and exciting (see Rose Garden, 2010) has now become predictable and unamusing (No 10, Monday). A whole bunch of new policy initiatives were unveiled to show the coalition still has a bit of a spring in its step. It didn't matter too much that a lot of it is so long-term that it feels almost academic.

All was going swimmingly, although some experts were complaining it might have been a bit better for the review to contain more detail. The matter appeared closed. Until, that is, a photographer snapped a Downing Street aide in the street outside No 10 clutching a restricted document, pondering the pros and cons of releasing a more detailed line-by-line assessment of the coalition's successes – and failures.

Oh dear. After some thoroughly dubious claims from No 10 that they had always meant to release this audit, the details came out on Wednesday. Ed Miliband had a ball making Cameron feel uncomfortable about it in prime minister's questions. We spent Wednesday afternoon combing through the document and identified 18 of the coalition's biggest broken promises – from internet snooping to tuition fees. They should never have released it…

The coalition's two party leaders had a better time apart this week. Nick Clegg took the bizarre step of signing up to a weekly call-in show, something no senior member of the government has ever done before. He is a desperate man, we suggested – but there may be some method to his madness. Clegg is certainly an innovator. In his dire situation, he has to be.

While the deputy prime minister's sights are fixed on trying to cling on to his job after the next general election, Cameron's gaze is fixed on five years after that. The Tory leader wants to stay in Downing Street for the entirety of the next parliament, rather than stepping down halfway through as had been previously expected. This is a really significant move from a man usually reticent about his future ambitions. It's taken all of Westminster by surprise, and will be on the minds of Tory MPs for the next few weeks.

Their views may well be shaped by the contents of Cameron's looming speech on Europe, which is now expected to lead to a referendum at some stage in the next parliament. Even the prospect of this move has prompted jitters from business leaders at home and key diplomatic partners abroad. Barack Obama's administration across the Atlantic has made clear the US doesn't want Britain out of Europe. Don't jeopardise the special relationship, now. Across the North Sea, Germany has been making worried noises, too. This will only encourage the eurosceptics, of course. It shows Britain is getting some attention.

The first parliamentary week of 2013 also saw a thoroughly bad-tempered battle over benefits kick off in the Commons; the Cabinet secretary admit No 10 feared a "gigantic conspiracy" from the police over plebgate; and a bizarre satirical call for teenagers to self-harm as a way of protesting against Justin Bieber's vices. Don't do it, kids!