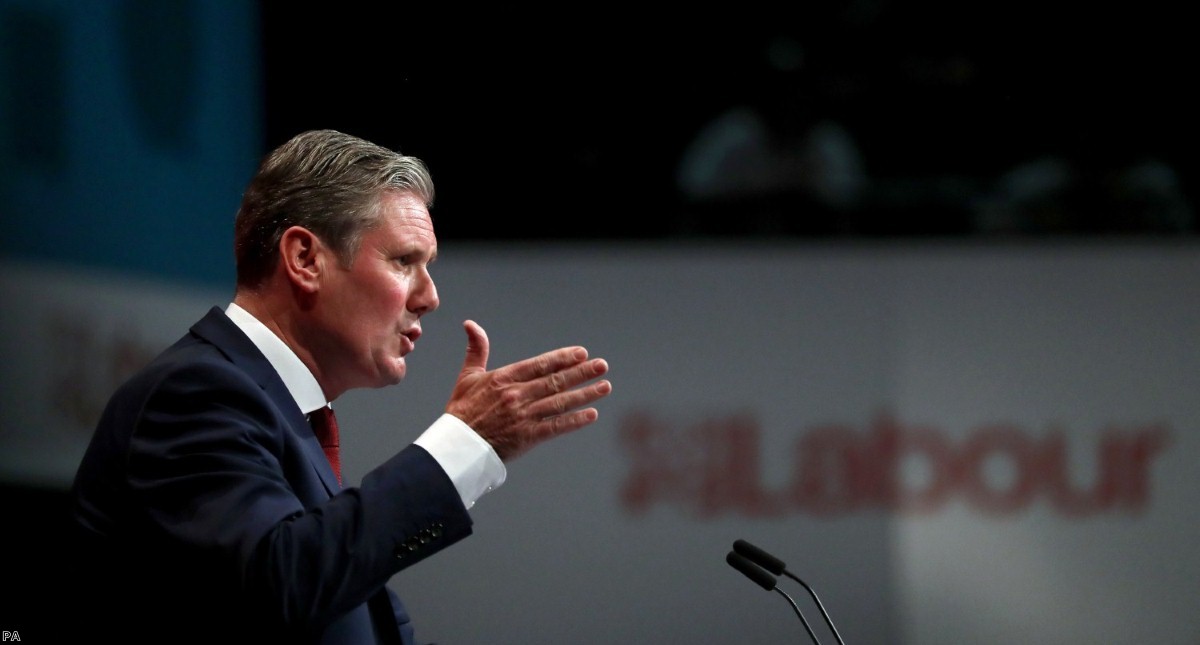 Big sigh of relief. Keir Starmer is the new leader of the Labour party.

The rearguard defence by the Corbynites, in the form of the Rebecca Long-Bailey campaign, faltered and came to nothing. Starmer won in the first round with 56.2% of the vote.

Starmer isn't perfect. He hasn't exactly conducted a thrilling campaign. But this should be a moment of profound satisfaction. Whatever else he is, he's a grown-up. He can scrutinise legislation. He knows how to hold the government to account. He isn't a tribalist, or lost in some deranged internal war against imaginary enemies. After five dreadful years, we finally have an opposition again.

Nevertheless, the new Labour leader faces a seemingly impossible situation. The party has been hammered. Many believe it'll take two general elections to get to a position where they could win again. And he takes the leadership at the height of a crisis in which the public will be completely uninterested in what the opposition thinks about anything. In times of emergency, people look to the government. That's been borne out by recent opinion polls in countries as varied as France, Britain and the US.

But things aren't as bad for Starmer as they're made out to be. We are in volatile political times, in which sudden shocks are possible. The support Boris Johnson secured in Labour seats was shallow and unreliable. The result was a judgement against Jeremy Corbyn rather than the party itself.

The current emergency provides opportunities for Starmer as well as challenges. A narrative has developed in which the government has been too idle, distracted or irresponsibly experimental to develop a proper approach to the coronavirus. That's why it wasted February. That's why its messaging was so confused in March. And that's why it is facing such brutal interrogation over medical equipment and testing in April.

For the moment, that narrative has not affected public support. But it is there in the background, waiting to be harnessed as this crisis drags on. People will be scared for their own health, anxious about that of their loved ones, and bored and frustrated by the continued restrictions on their lives. Those impulses could be easily turned on the government if the thought takes hold that any of it was preventable.

Starmer is in a good position to accomplish precisely that. He proved adept during Brexit at taking complex policy detail and using it to damage the government.

Many of the old protections No.10 had against that attack have now fallen away. The opposition is no longer functionally insane. The government no longer has the tribal defences provided by Brexit. And even the right wing press it could usually rely on, like the Telegraph and the Mail, may not be so compliant when it is their ageing readers who are most threatened by the disease.

Even the perception of Starmer as stolid and a bit boring – which is unfair, as it happens, but exists nonetheless – could prove advantageous. We are in a period of chaos and disease, in which normal life is turned upside down under a prime minister powered by his own self-regard. After that, dull and competent might be just what the doctor ordered.

Those who want Starmer to do well should be mindful of the demands they place on him. That goes especially for Remainers. The Labour leader's opponents will be keen to force him into that Remain-shaped hole and recreate the culture war of last year. They want all their old favourite songs back. The out-of-touch metropolitan elitist vs the will of the people. The tired old lies. It is a precondition of his success that he does not allow that to happen.

That means that there should be no pressure for him to talk about rejoining the EU or anything like that – not now, nor, in all likelihood, during the next election. A campaign to get back in should be held back until the election after that, if it is to be successful.

The same goes for the more immediate issue of whether transition should be extended. Starmer should avoid that issue like the plague. The Tories would love to define him as the Remainer who can't get over the result.

It's perfectly obvious the negotiations need more time – and he can say so – but that should not be a concerted effort of his leadership. Nor should Remainers in or outside Labour pressure him to make it so.

Starmer has done enough to earn the trust of those who opposed Brexit. Over long years, facing an indifferent Labour leadership and a lunatic nativist version of the Tory party, he diligently worked to develop a respectable policy programme. If he sees, in the medium-term future, a chance to go back into the EU, he'll take it. But that'll only happen if he's prime minister. And the quickest way to prevent that outcome is for him to be defined as a continuity Remainer.

There's no way of knowing where we'll be in five years. Even last month seems like some distant past which is barely comprehensible from our current vantage point. But that uncertainty also provides opportunities for the new Labour leader, which he can make good use of.

And either way, even if it all goes catastrophically wrong, at least we have a grown-up leader of the opposition, who can read the public mood and is capable of exercising independent judgement. And that puts us in a much better position than we've had for the last five years. Time for a small celebratory drink in our little lockdown bunkers.