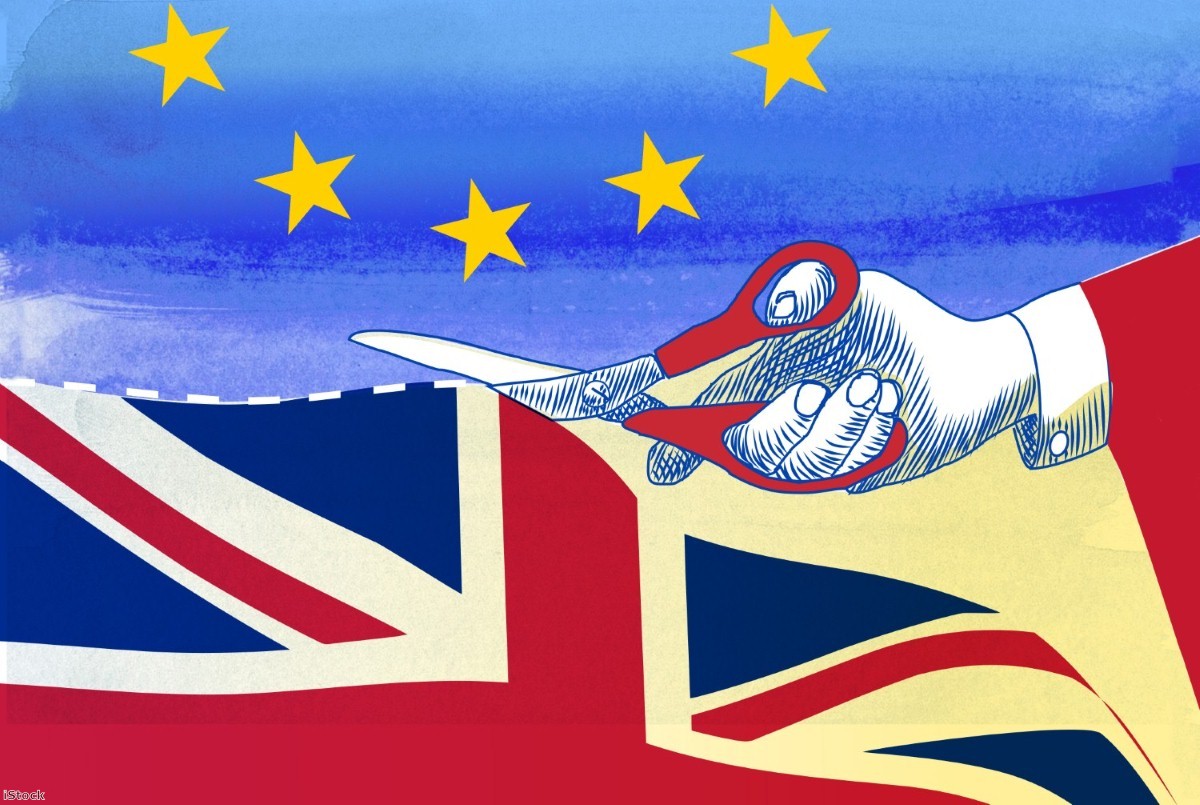 Let’s be honest: There are no new Brexit ideas to save us

It's telling that the life-cycle of a David Davis idea is now less than 24-hours. Someone at the Brexit secretary's department briefed his zany "double-hatted" regulatory regime for Northern Ireland to the Sun on Thursday evening and it was ruled out by No.10 on Friday lunchtime.

But there is always another terrible idea wheeling down the Brexit railway, chuntering and spluttering  with good old English pre-regulation exhaust fumes. Today's is by Open Europe, the think tank currently run by Michael Gove’s former adviser Henry Newman and which used to be run by Davis' current adviser, Raoul Ruparel. Its new report is called 'Striking a Balance'. It proposes staying closely aligned with Europe on goods while breaking free on services. Except that it doesn't. Very quickly it starts swirling around its own internal contradictions until it vanishes into thin air.

As with so many reports which claim to strive for a middle way, it is very Brexity indeed. Despite all the warm words on goods, it wants to leave the customs union. So, right there, before you even have to read any further, there is no solution to the Irish issue.

It also wants to leave the single market, even on goods, where it is ostensibly making all the tough compromises. There would be "mutual recognition", where both sides assume that what is good enough for one is good enough for the other. But the UK could at any point diverge, with the consequence that this part of the agreement then ceases to hold. They give this the posh new name of 'managed alignment', but it is old ideas, rehashed.

Mutual recognition means different things in different contexts. Sometimes it's just conformity assessments for parts of another country's economy, which is basically like saying that you trust Japanese agencies to check the safety features on car tires for you.

Other times, it's more full-on. In the EU, a principle called 'Cassis de Dijon', based on a famous legal case involving a French liquor (don't ask), means things are generally considered OK for one country if they're OK for another. But this doesn't exist in isolation. It exists because they have built trust. They share laws and safety standards and courts and a whole institutional framework.

In the end, this idea isn't technical. It's part of a very old question: how do you trust one another enough to live side by side and cooperate? The bank note you used at the shop this morning has no intrinsic value. It is just paper, or maybe plastic. The reason you and the shopkeeper treat it as currency is because you trust the system around you to enforce it. She takes that note from you because she believes that the guy she hands it to later on will also believe it has value. That trust requires infrastructure, from the Bank of England, to police, to courts. Without them, it all falls down.

The British government's behaviour is the opposite of trust. It is divorce. It says every day it wants to do things differently and break away from EU law. It has red lines on the need to leave the court and legal jurisdiction on which the EU is based. Under those circumstances, why would the EU allow mutual recognition without any of the things which make it possible? They will not. This has never been on offer. It never will be.

The truth is there is no middle position. You either stay in the single market and customs union or you break away. The former option means you share sovereignty and keep your economy intact. The latter means you get lots of sovereignty back, but your economy is damaged and there's a hard border in Ireland. The same old choice has been there throughout – prosperity or control. The government pretends it is not a choice. But it is.

If there is a compromise position it would probably involve customs union and single market membership for industrial goods but an exemption for agriculture, so that the UK has something to offer trading partners to secure penetration of its financial services. But this would still have heavy economic costs and is probably impossible to negotiate, certainly in this time frame.

The fact the government cannot accept these choices explain why it is stuck in an endless customs union loop with no answers, even though there are just weeks left now until the crucial June European Council meeting. If there's no movement there, all these issues go right down to the wire for the October meeting.

That is increasingly considered the most likely outcome. The German government's Brexit coordinator, who does not speak unless he has thought it through, has concluded that "not many are expecting very much" from the June meeting.

What to expect from June #EUCO regarding #brexit ? My personal impression: Not many are expecting very much now. If this is so, October would then have to solve ALL problems (withdrawal, NI, governance, future …) in one go. Odds still unclear.

The leaders of Britain's biggest businesses, including BT, Tesco, GlaxoSmithKline, BAE, Aston Martin and more, go into Downing Street for a meeting with the prime minister today, with a cloud of frustration hanging over them. It's just days after the European Roundtable of Industrialists (ERT) issued a statement calling for clarity on the customs arrangements. They need certainty, not the endless cycle of vacuity offered by the government.

But Theresa May has nothing to offer. "On customs, the prime minister explained the work that was underway on the two customs models and underlined the importance of ensuring that our future trading arrangements with the EU are as frictionless as possible," Downing Street said in a statement, like a broken machine churning out text.

Even now, all they have to offer is two customs options which the Cabinet cannot agree on and which have both already been rejected by the EU. There is still no acceptance that choices have to be made. There is no leadership, no intellectual engagement, no realism and no basic sense of patriotic responsibility. It is criminal negligence.