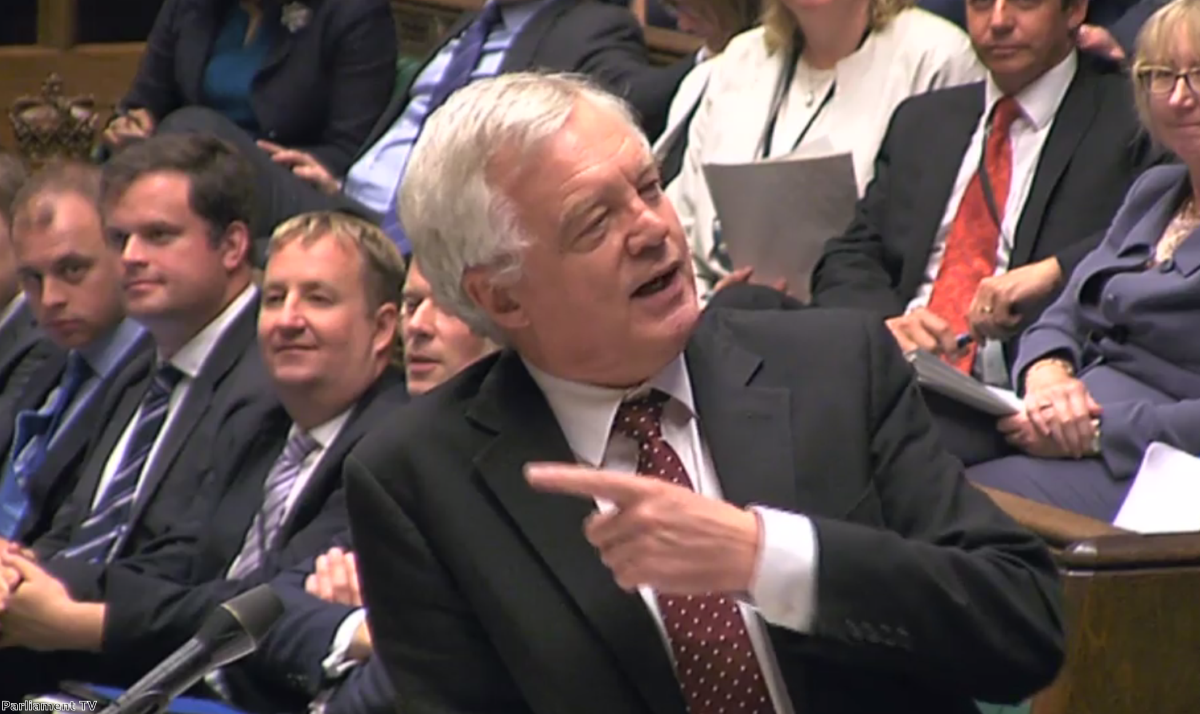 Nationalism is turning Britain into a basket case

The stench of nationalism is everywhere in British politics. It smothered the Commons Brexit debate yesterday afternoon, as MP after MP rose to demand respect for the "will of the people" and warn of a "betrayal" against Britain from those who questioned them. You could sense it all over the post-Brexit immigration plans leaked yesterday to the Guardian, which outlined a programme for comprehensive economic self-harm in order to satisfy the most mean-spirited elements of the national personality.

Evidence, reason and material improvement are out. Identity and emotion are in.

Taken together, the debate and the immigration paper point us once again towards a very hard Brexit indeed. And not just that, but a poisoned political culture in which anyone who stands up to the xenophobes and little-Englanders is branded a traitor to the country.

There were many disturbing elements to yesterday's debate, from David Davis' weak grasp of the issues to the lack of criticism from his own benches. But perhaps the worst was his smirk. Whenever an MP spoke in these terms, for instance by attacking "Remoaners" or talking about "betrayal" – a word used with alarming frequency – Davis smiled. It was instinctive. It told you more about his inner thoughts than everything else he said put together.

The Brexit secretary once again refused to accept that a trade agreement would not be complete by March 2019, even though he has made no progress in the time available to him so far. He accused Labour – there's that word again – of "betraying their own voters" for supporting customs union and single market membership during a transition.

As the debate was going on, the Guardian published a leaked Home Office document on immigration control after Brexit. It is a manifesto of self-harm in the name of xenophobia. Some will take umbrage at that. They will insist it is nothing to do with xenophobia. It's just about "control", a perfectly reasonable request which should be satisfied for a healthier immigration debate. What nonsense. America has no free movement rules and the debate there is exactly the same and uses the same language, which is why Trump promised to build a wall in the first place. They insist it is about wage reduction, but can provide no evidence of it, beyond a handful of isolated and limited studies. They insist it is about 'cultural values', as if that itself is anything less than a euphemism for xenophobia.

We might as well call it what it is. Britain is prepared to sabotage its own economy in order to stop foreigners from living here. It is happening because the demands of xenophobes are now the primary motivating force of government policy.

The document proposes a three stage system. In the first phase, which lasts up to Brexit day in March 2019, the existing rights of EU citizens would be secured. In the second, which would last for two years afterwards, there would be transitional arrangements. Elaborating on this element is the primary purpose of the paper. In the third, which starts after transition, an ongoing system would be put in place.

The paper proposes scrapping free movement immediately after we leave the EU. Sure, some parts of this interim stage will be modelled relatively closely on free movement. People could come to work during this short period without checks, for instance, with enforcement presumably passed on to employers and landlords. But the free movement directive would be ended and family reunion rules reformed.

This instantly makes any sort of close transitional period for Brexit impossible. There can be no grandfathering of existing arrangements, there can be no EEA alternative, there can be no customs union and single market membership. This is the language of the cliff edge: no regulators for drugs, or flights, or nuclear material, no customs arrangements to prevent blockages at the border, no time to secure our position at the WTO.

During the debate yesterday, Davis accused Labour MP Stella Creasy of scare tactics when she raised the prospect of flights being grounded without a deal on Open Skies and reminded her of her "duty to her constituents". He was wrong and she was right – as a point of objective fact. So he either does not realise the cliff edge exists or is intent on lying about it. Either way, his comments and the proposals put forward by the immigration paper suggest we are hurtling towards it at great speed.

The transitional period has one other startling addition: registration with biometric details. In effect, the Home Office is starting an ID cards programme, but only for EU migrants. No doubt they will call concerns about this hysterical. In reality, it is an invitation for discrimination and persecution, given the manner in which immigrants are discussed and treated in British political culture in general and this document in particular.

The third phase, which fully introduces the new system, would limit the residency of low-skilled immigrants to two years and those for high skilled immigrants to three to five years. The paper later says that "a route" to permanent residency will be allowed, but set at five years. Someone may just be able to switch from one highly skilled job to another in order to qualify for that, but you can see the plan quite clearly. This is a mechanism to prevent any EU immigrant from settling down in Britain. The paper is quite proud of this, with its plan to "reduce the opportunity for workers to settle long term in the UK".

Remember Theresa May's speech last year against citizens of nowhere. That was an attack on immigrants, those who admire or welcome them, and those who were born to them. It was a speech against those with multiple identities. This is the policy consequence: It is not just a plan to limit immigration. It's more than that. It's a plan to stop immigrants turning into Brits.

For those on low income jobs, like fruit pickers, the economic imperatives might be enough. But the 'best and the brightest' the Home Office pretends to be interested in have no such requirements. They can go where they like. They can go to countries which welcome them, which do not force them onto a biometric database distinct from the domestic population, which allows them to feel at home, which values their contribution, which is open and tolerant and not driven mad by its own demented insecurities.

But, of course, no-one at the Home Office has bothered to ask themselves this question. The motivations of immigrants are as alien to them as the landscapes of Mars. They are a problem to be controlled, not people with hopes and desires. It is plain to anyone with the potential for empathy that this system would wreck highly-skilled immigration with appalling consequences on the economy. But it's clear that no-one with any role in this document has the potential for empathy when it comes to immigrants.

Even getting to the UK will be hard for Europeans. The Home Office proposes prioritising residents' job applications and forcing EU citizens to get their job from outside the UK. Just think of the practicalities of that, in terms of interviews alone. It's not impossible, but it goes that extra mile to make it impractical.

One section on evidence can only find positive things to say about immigration and struggles to articulate any negative ones. But it doesn't matter. If we all become poorer, it is apparently a price worth paying. If Britain suffers a catastrophic jolt to its economy and its international reputation as a result of the Brexit cliff edge, it is apparently a price worth paying. This is the mania of nationalism, the triumph of identity over reason.

All that matters is reducing immigration. Not for the economy. Not for wages. But because we have a Ukip government pursuing a Ukip policy agenda and pretending it's the Tory party.