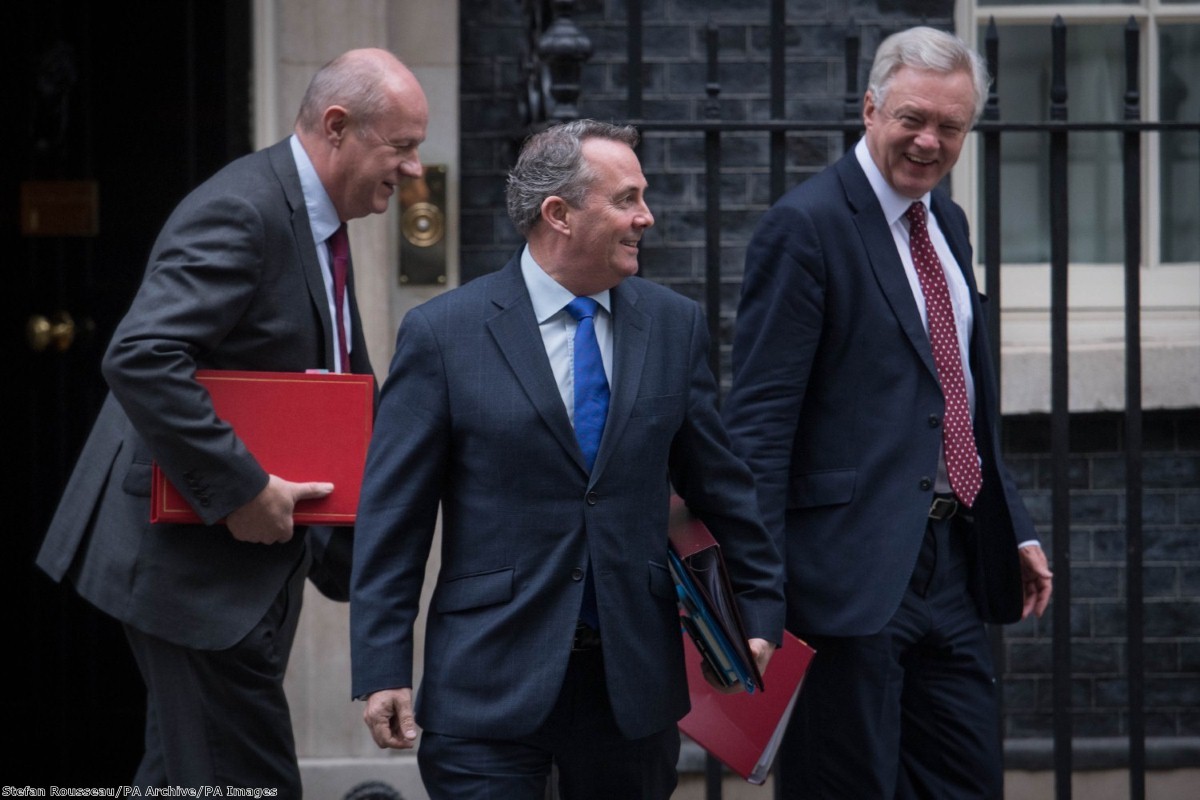 It's hard to know where to start with the customs union position paper. It is such a mess, such a full-spectrum catastrophe of ineptitude and wishful thinking, that it's honestly quite difficult to choose which bits of it to single out for criticism.

On Sunday, Phillip Hammond and Liam Fox wrote a joint piece for the Sunday Telegraph agreeing that the UK would not stay in the customs union during transition. There is no particular reason to do this, except for the religious zeal of hard Brexiters. Staying in would allow British business to enjoy certainty and consistency as we left the EU and reduce the amount of work the UK government has to do before Brexit day. But regardless, that is not happening, so now we are full steam ahead to leave, even in the transition period.

It is quite mad. But there is of course one reason, and one reason only, that this Alice in Wonderland nonsense is being countenanced. This imaginary new customs union would allow Britain to negotiate trade deals. Disgraced former defence secretary Liam Fox is upset that he is not legally allowed to do his new job as international trade secretary while we're in the customs union. So this is the solution. But even here the government does not appear to know what it is asking for. They admit the UK will not be able to implement any new trade deal, but are unclear about whether it would be able to sign them. Is it just going to talk to partners about them? Because if so, that is something it is already doing, as David Davis admitted this morning.

What's really unclear, of course, is exactly why the EU would agree to this. There is an existing customs union, which the UK is in. It gains nothing by granting the power to form another identical one, for no reason except to make the international trade secretary feel better about himself. There is also considerable confusion over the legal status of this arrangement. We'd be out the EU, and therefore outside the remit of new EU law and the jurisdiction of the European Court of Justice (ECJ). Presumably Westminster would promise to reflect any new EU law in its own books during this transitional period. But what about new ECJ interpretation of EU law? We just don't know and it’s not clear the Brexit department does either.

After this period is over, the government is proposing two alternate models for a future relationship: a streamlined customs arrangement or a new customs partnership. It is not clear which they prefer or why. It is not even clear if they have a preference. What is clear is that they have no idea how much they will cost, if any new buildings would need to be leased in order to oversee them, what kind of infrastructure is required to deliver them, if new training would be necessary, how much the various technical solutions they propose would cost or whether they would fit into our existing systems.

The streamline option recognises that the UK and the EU would be third parties, but tries to simplify customs arrangements so that they are as frictionless as possible. This is done through continuing "some existing arrangements", "reducing or removing" other barriers, and a variety of highly optimistic IT solutions.  There'd be a waiver on entry and exit requirements, a mutual recognition agreement for authorised economic operators, technology-based solutions for roll-on-roll-off ports, and some other initiatives. Lastly, and with no small hint of irony, the UK would join the Common Transit Convention, a transit procedure used between the EU and the Efta states which Britain refuses to join for transition.

All of this is perfectly sensible if you're out the customs union, but it is a lot of work, based on technology which has not been shown to work at this scale, and relying to a huge degree on the cost-effectiveness and utility of IT solutions. Anyone familiar with the UK government's history with major IT projects, such as the NHS database, will shudder with horror at how catastrophically wrong this could go. It is also highly uncertain whether it can all be set up in time. And at the end of it, after all that work and risk, we'd have a system which is worse than now. Even the position paper, despite its pathetically optimistic disposition, concedes that it would result in "an increase in administration compared with being inside the EU Customs Union".

It would also be less effective. Whatever names they put on this system, and whichever barcode or microchip they put on lorries to show clearance, they will have to only check some vehicles in order to maintain movement at the border. It will be a magnet for the black market and smugglers.

The second model, a new customs partnership, goes from the world of optimism to that of outright fantasy. This would basically create a new twin partnership where the UK and the EU "operate a regime for imports that aligns precisely with the EU's external customs border for goods that will be consumed in the EU market, even if they are part of a supply chain in the UK first".

This is a magical solution to a problem which in all likelihood cannot be fixed. Customs unions work by creating one external tariff across their border and eradicating them inside the union. There's a reason for this. If you allowed variable tariffs, you'd create an incentive to undermine the union. Imagine if all the EU has a 10% tariff on bananas. But then Lithuania drops its tariff to five per cent. Now all banana exporters would send their product to Lithuana and get into the EU that way, because once it's in, there are no customs checkpoints to stop it going all over the continent.

This is also why we have country-of-origin checks – those highly laborious and bureaucratic requirements you keep hearing about, like some sort of monster rising from a swamp – that establish where a product comes from. They tell you the origin of the shipment so that you can see if it's a country that the customs union has a free trade deal with. This is how you stop a country like Japan, which doesn't have a trade deal with the EU, from sending goods to South Korea, which does, and then having them exported to the EU under a lower tariff.

The British government is proposing that it would police the customs union's external tariff at its own borders as if it was still a member. Then if a good came into the UK destined for Holland, say, Britain would collect the EU customs union tariff and send it on to the Dutch. In exchange for this, the EU would maintain bureaucracy-free trade between itself and the UK.

But now what happens if Britain reduces its tariffs? Let's say the EU and UK have a 10% tariff on bananas. But once it's outside the EU, the UK decides to lower that tariff to five per cent. Banana exporters now have an incentive to send all of their EU bananas to the UK and dodge the higher tariff, because once it’s in Britain it can travel without checks across the continent.

The UK government's solution to this problem is insane. It proposes a "robust enforcement mechanism". What would it do? Well, they're not sure, but it "could involve, for instance, a tracking mechanism, where imports to the UK were tracked until they reached an end user". Quite what miraculous technological development would allow us to track all the items coming into the UK until the point they were purchased in another country is not specified. But fear not. They have other ideas.

They could also set up a "repayment mechanism, where imports to the UK paid whichever was the higher of the UK's or the EU's tariff rates and traders claimed a refund for the difference between the two rates when the goods were sold to an end user in the country charging lower tariffs". The staggering level of red tape this would entail is not mentioned. They are asking importers to collect receipts (presumably) for all the items they have sold in any country in the EU and then present them to the UK government for a refund. The fact this is thrown out there like some minor detail is laughable. It goes without saying that this type of system would function as an open invitation to fraudsters, just like the streamline solution is an open invitation to smugglers.

This stuff is so unrealistic you might as well file it under sci-fi. It is a pamphlet of desperation. And then, at the end, comes the punchline, as the Brexit department announces its consultations with businesses and trade groups on the new arrangement. "The government would particularly welcome views on…. whether [it] should consider any additional or alternative proposals".

In other words: We don't know what we're doing. Please help us.

Through it all, one question sticks with you: Why the hell are we doing this? This is not even about Brexit. It's about leaving the customs union, which is a frankly insane thing to do. Officials defending these plans say that leaving the EU means leaving the customs union. It does not. That is a choice taken by the British government. This dog's breakfast is the result. Imagine what else we could be doing with our time.