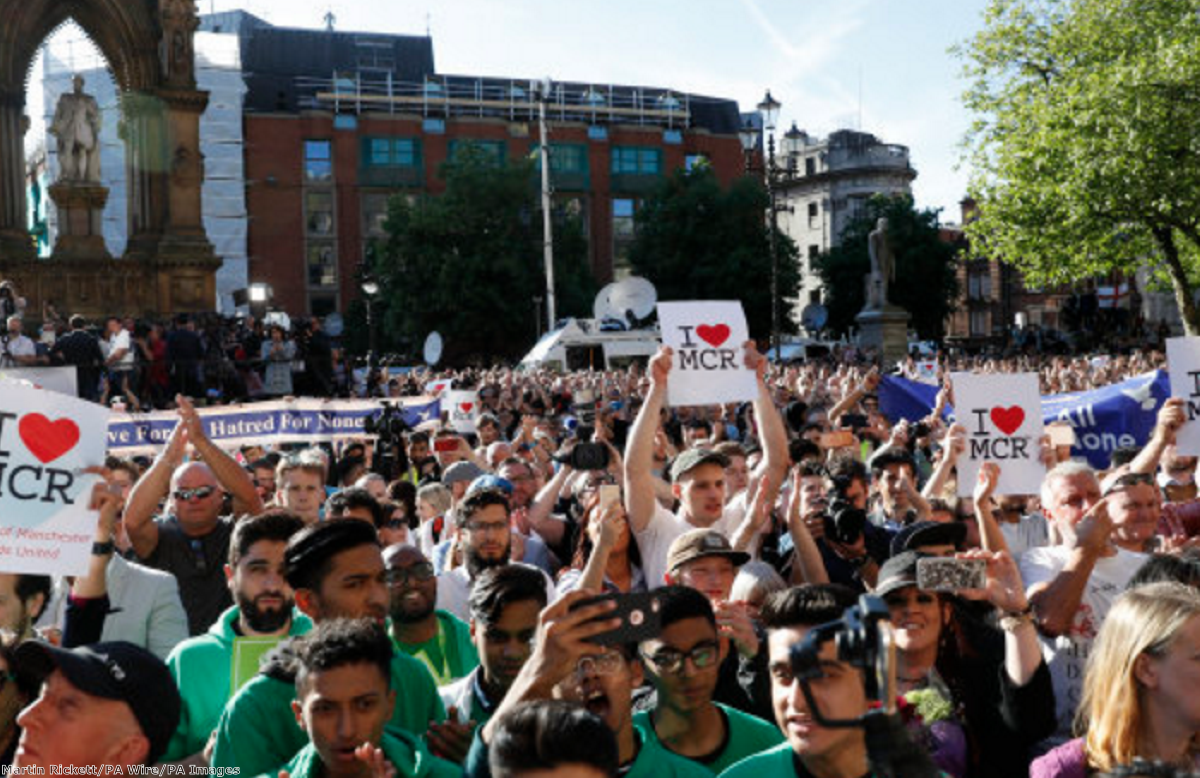 Week in Review: A triumph over hate

The first response to terror is the abyss. The horror of it is too severe, so the mind just opens up to this big dark place without any hope or meaning in it.

It sticks with you. It scratches away at you, sometimes days or weeks or years after the event. Usually there is something which stands out, some fragment of human despair – like the people jumping from the Twin Towers or those lying waiting for death in the Bataclan or the hostage obediently reading out a statement flanked by their murderers. That's part of the plan. To make you afraid. To make you hate. To put something dark and terrified in your belly and let it grow.

That's why the aftermath matters. It's why campaigning has to stop for a while. Sure, it shows that terror can affect our way of life. But then, what way of life worth having would not be affected by this kind of horror? What kind of society would be able to move on quickly after seeing its children killed in this way? You have to stop, take stock, deal with the grief of it, as a country. And anyway, the political differences between us always seems much smaller after an attack like this. Faced with the meaningless existential chasm of terror, even our worst opponents seem sane and tolerable.

Hate, fear and the breakdown of societal norms: These are the things which create terror, but also the intended result of it. Broken, vicious men – they are nearly always men – trying to create more people like them. And that requires a similar kind of hatred on the other side, a kind of hatred which can keep the cycle going, can meet death with death.

In the wake of the attack, LBC presenter Katie Hopkins tweeted out that "we need a final solution", a clear reference to the Holocaust. She also tweeted out a message to "Western men", informing them that "these are your wives", "your daughters" and to "rise up". It is equivalent to the type of propaganda Isis itself puts out. And they hardly invented it. Look back at old Second World War rhetoric and it's the same: A focus on the men, warning them about what'll happen to their wives and daughters, often with an emphasis on sexual violence.

Hopkins' message was clear. It always has been. It was when she wrote about using gunboats against migrants or called them "cockroaches". It was when she went to France recently to campaign for the National Front. But this time it seems she went too far. LBC sacked her this morning. A perpetual voice of hatred, which routinely encouraged violence, has been quietened. That is a good response to this week's events.

The more simplistic free speech advocates will undoubtedly be horrified, but they act against their own values. There is a reason we draw the line on incitement to violence. Where speech encourages attacks on others, it limits the freedoms of the victim. That might be their freedom from fear, or from physical assault. Or it might be their freedom of speech itself. After all, it is impossible for them to exercise it if they are being attacked.

It's like Clement Attlee said when arguing with Churchill about personal freedom: it is not absolute. It takes place within the limits defined by maximising other people's freedom.

There were other attempts to push people away from unity and peaceful symbolism towards hatred. Party leader Paul Nuttall said "it is not good enough to light candles" and then went on to blame immigration. Other commentators complained that "fury and rage have been squashed in a determination to stick to a narrative of keeping calm, carrying on and choosing love not hate" or mocked the view that the attack was not to do with Islam or immigration.

The good sense and natural disposition of the people is a constant outrage to those who would rather we swung into an outright culture war. But through it all, the messages of hatred fell on deaf ears. Instead, the people of Manchester behaved in a way that was simultaneously extraordinary and yet utterly unsurprising. They were resilient, sad and deeply proud.

None of it is to ignore the anger or the horror. It is simply to refuse to let it control you. It is to refuse to act in the way these murderous barbarians want you to.

The crowds showed it in St Ann's Square, after the minute’s silence to those killed in the attack, when they broke into an impromptu rendition of Oasis's 'Don't Look Back in Anger'. They understood better than the politicians and the commentators what the moral response to terror must be, the solidarity it requires, and how it is poisonous to this type of wickedness. After a horrific week, it allowed the country a kind of triumph. We are not who they want us to be.