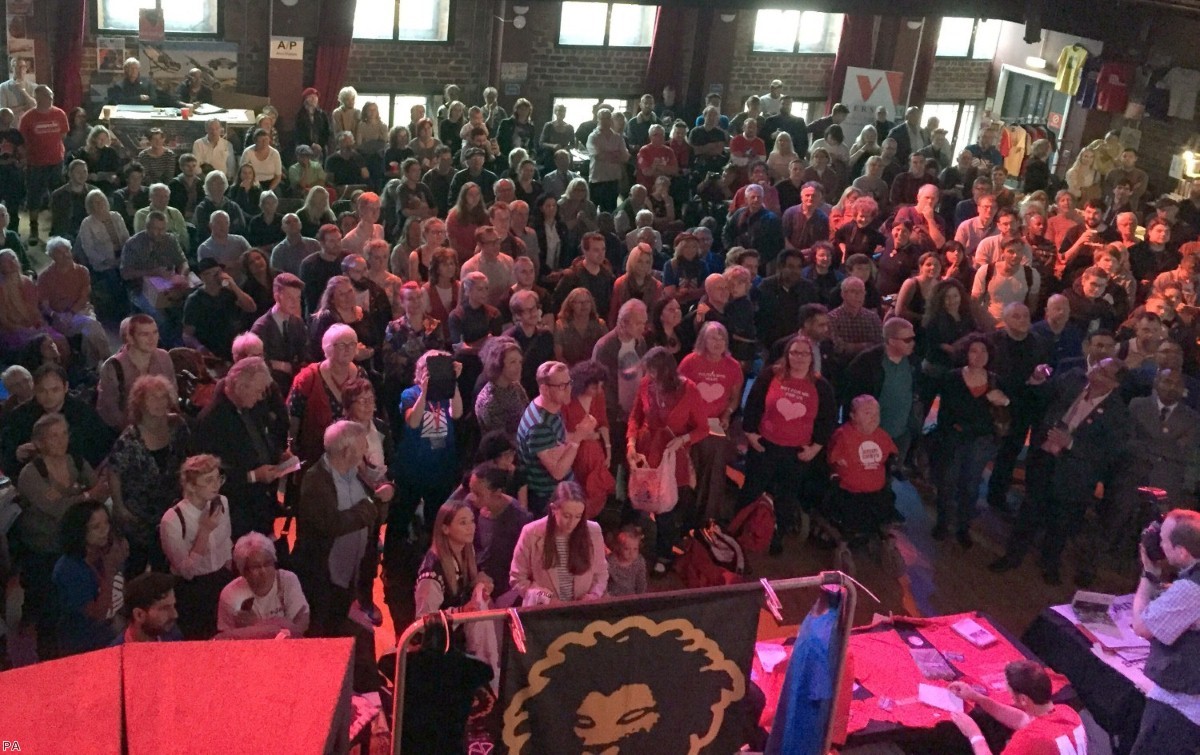 As I walked into Momentum's debate on antisemitism in the Labour party yesterday afternoon, a man thrust a leaflet into my hand.

It was titled "who are the Jewish Labour Movement?" and called for the expulsion of the Labour-supporting Jewish group from the party.

The leaflet, purportedly written by the "International Jewish Anti-Zionist Network", suggested that the group, who are long-standing Labour affiliates, were no longer welcome. It denounced them for their "racist right wing affiliations" to the Israeli Labour party and the Board of Deputies. Their director was attacked for taking a job with the Israeli embassy.

"Why with such racist, rightwing affiliation, is the JLM also affiliated to the Labour Party?" it asked.

The answer was apparently because it was in fact a "representative of a foreign power".

"The JLM does not belong in the Labour party" it insisted, adding that the group were spreading claims of antisemitism to undermine Jeremy Corbyn and John McDonnell.

Leaflets calling for the expulsion of the Jewish Labour Movement from Labour being handed out on way into Momentum's antisemitism meeting. pic.twitter.com/Yc1cXcvxiY

On the panel was Momentum vice chair Jackie Walker, who was suspended by the Labour party earlier this year for a Facebook post in which she linked Jewish people to the slave trade. She has since been reinstated and claims her words were "twisted, mashed and mangled," by her opponents.

Walker suggested Labour's antisemitism crisis had been manufactured by those with a "political agenda" against Corbyn.

"I am not saying antisemitism does not exist in the Labour party," she said, reading from a script.

"The Labour party, after all, is simply a reflection of society. But I am saying claims of its significance are being exaggerated for political purposes and this has been done at huge cost to our movements and communities and to many individual people in and outside of our party."

She insisted that claims of widespread antisemitism in the party were a "a weapon on political mass destruction" which were being deployed to damage Labour's leader.

"It seems to me there is little or no hard evidence that Labour has a major problem with antisemitism but there is, as Chakrabarti says, an occasionally toxic atmosphere. The most fundamental aims of such allegations are to undermine Jeremy, silence his supporters and ensure any chance of an alternative to the neoliberal diet of cutting services and taxes that has been dished up to us as politics until Jeremy got the leadership never actually gets to our table as voters."

Her fellow panelist Jonathan Rosenhead from the group "Free Speech on Israel" agreed, describing claims of antisemitism in Labour as a "souffle"

"How has this monstrous souffle of a moral panic been whipped up?" he asked.

"Where has it come from, this idea that there is a crisis of antisemitism… So we need to ask about this souffle: Who are the cooks?"

At this point a member of the audience called out the name of the UK Israeli ambassador Mark Regev.

Not everyone agreed with this sentiment. The chair of the Jewish Labour Movement, Jeremy Newmark, explained how a Jewish Labour councillor had been verbally abused by other members of his local party and told that "you are responsible for the slave trade" just days after Jackie Walker's Facebook comments.

He added: "The use of that antisemitic myth, that was perpetrated and adopted by Ku Klux Klansman David Duke had a very real impact upon the life of one young Labour activist."

He also explained how a young female Jewish Labour activist had been reduced to tears following attacks against her for working at the Israeli embassy.

One member of the audience also stood up to insist that there had been a long-running problem of antisemitism on the left.

"I've met people in my life who hate black people and who hate Muslims," he told the room.

"Very few are under the impression that black people control things secretly or that Muslims have a banking cabal. A history has existed since the 19th century of anti-capitalism and now, surrounding itself around Israel and Palestine issues, of basically a left wing antisemitism."

This appeared to be an unpopular view however. As one Momentum representative explained, it was simply not possible for there to be antisemitism on the left because anyone who was antisemitic was by definition not on the left.

"I don't actually agree with the comrade at the other end of the room on there being a specific left antisemitism," he said

"I think that kind of antisemitism you describe exists but I wouldn't call it any kind of legitimate part of the left. The Left is anti-racist. The left locates the real culprits and doesn't blame any race and if anyone is antisemitic in that way it is called the socialism of fools and is no real socialism at all."

The general consensus in the room was that, while antisemitism may exist in the Labour party, it was on such a small scale as to be an irrelevance. Any evidence of antisemitism in the party was merely "anecdotal" and not backed up by the data, Rosenhead insisted. Any attempt to suggest otherwise was merely an attempt to smear the Labour leader which was, in the words of Walker, being "aided by a media that is rabidly anti-Corbyn".

Audience member says creation of Israel has been a "disaster" for the Jews and will cause a nuclear war.

Others believed the debate was overshadowing bigger examples of racism in the party, perhaps deliberately. The chair of the Jewish Labour Movement was accused by one audience member of trying to "silence black people" by suggesting that antisemitism was "distinct" from other racisms. Walker, who is of mixed black and Jewish ancestry, agreed that black people were being silenced in the debate.

"At this point, when discussions of racism in the Labour party has the most media attention that I have ever known, no person of colour has been heard or has been allowed to insert their perspective in this debate or be seen as significant," Walker said.

"Black people have been made invisible."

Several audience members suggested that the whole row over antisemitism had been manufactured to damage not just Corbyn but those around him. "Bring back Ken [Livingstone]" one audience member suggested to applause.

In response, JLM chair Jeremy Newmark asked why, if antisemitism was not an issue in the party, Corbyn himself had set up an inquiry into it.

This went down badly in the room.

"We all know why he set up the Chakrabarti commission," Rosenhead responded.

"To bring some order and discipline into a ridiculous debate that was going on." This explanation drew large applause.

In his closing speech, Newmark made one last attempt to convince the room that antisemitism was a serious issue that needs addressing in the party.

"Actions have consequences. We at JLM are proud to oppose the actions of the Israeli government but do you know that every time comrades in this room and around the party seek to delegitimise us as a voice in this party the impact that it has back in Israel is to provide fodder for the Israeli right and election leaflets from Netanyahu telling them that Europe is riddled with antisemitism where even left wing Jewish movements have no space to operate?"

He went on to point out that Labour are hemorrhaging votes among British Jews.

"The last poll of Jewish support for Labour put it at eight per cent for Labour," he pointed out.

"And whose fault is that?," one audience member shouted out.

"Some of you may welcome that news but for me that statistic is a crisis," Newmark went on.

"That statistic needs to be addressed. If you say it doesn't need to be addressed then the message you are sending out to my community is that you don't care about that relationship and that Jews are not welcome in this party."