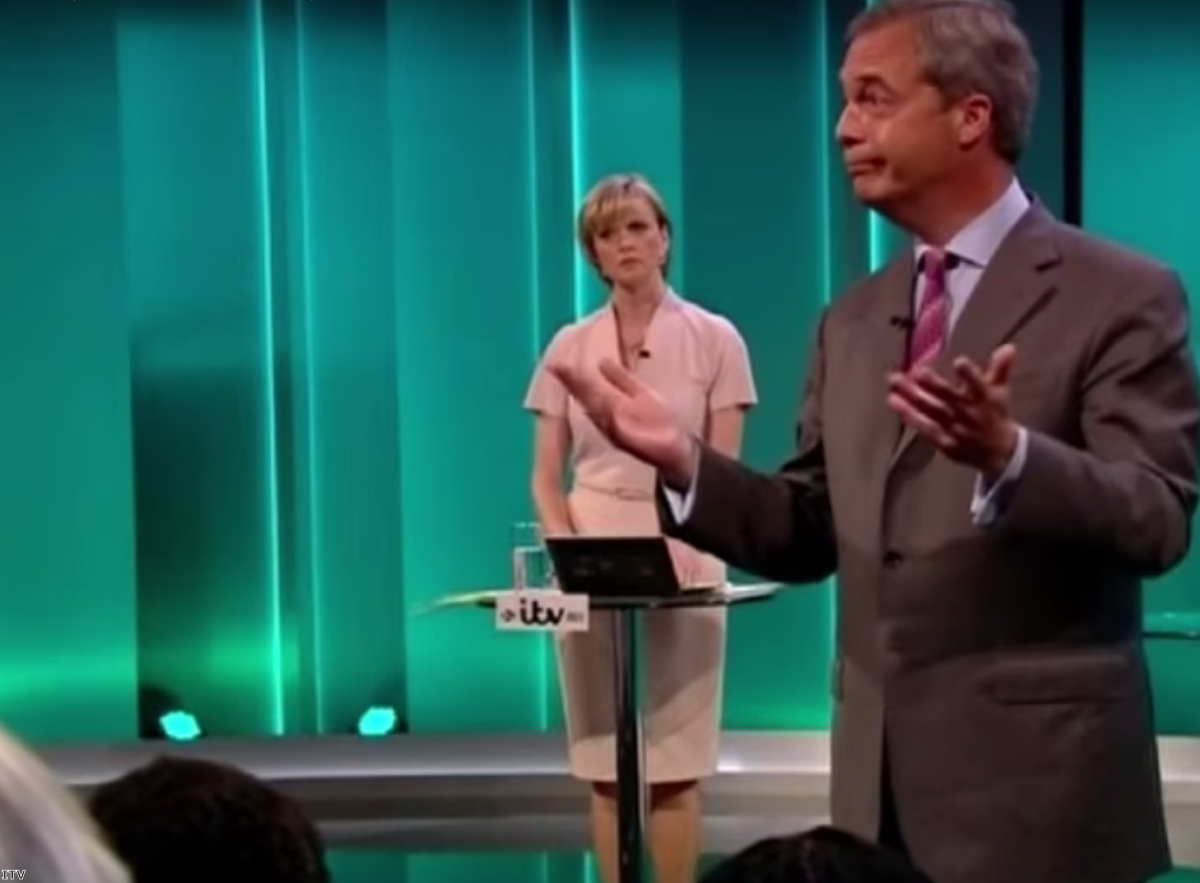 It was initially quite frustrating that David Cameron and Nigel Farage wouldn't be going head-to-head in last night's ITV debate. But then it turned out that the audience made a much better interrogator of the two men than they would have been of each other. Cameron got a rough ride, but nothing like that faced by his opponent. They tore the Ukip leader apart.

Farage is so used to fawning supporters that he can't quite handle critical ones without becoming visibly cross and emotional. And then he starts making things up, evading the question and speaking down to the audience.

Case in point:The Ukip leader was subject to a grilling from an audience member on the net economic contribution to the UK from EU migrants.

"A number of  high profile studies have clearly shown that EU migrants contribute far more to this economy than they take out," he said. "How can you constantly ignore these findings and continually tell us immigration is a disaster for the UK?"

Farage replied: "We see reports that say EU migrants pay more tax than they take out. I saw a report yesterday that suggested that actually it's a marginal loss for the country. I'll tell you what we'll do – I'll meet you in the middle. We'll agree with the House of Lords who looked at this and said in economic terms it's probably about neutral."

The report Farage mentioned says nothing of the sort. I asked Ukip which report he was referring to this morning and they pointed me to this one, by PwC, which came out last month. They highlighted the following passage:

"There is also some evidence of small, negative impacts of immigration on wages in semi- and low-skilled occupations in the UK as a result of EU and non-EU migration. Research has found that a 1% increase in the share of migrants in the UK-born working age population leads to a 0.6% decline in the wages of the 5% lowest paid workers. However, this study also found that a 1% increase in the inflow of immigrants also leads to a 0.7% increase in the median wage and a 0.5% increase in the top 10% of highest paid workers. Therefore, on balance, evidence suggests that there has been a slight positive overall effect on natives’ employment and average wages, but the distributional story is more complex, with positive impacts at the higher end of the skills distribution counteracting negative impacts at the lower end."

This is interesting but it doesn't say what Farage claims it said. In fact, the report's conclusions say the precise opposite.

"The introduction of tighter restrictions on migration is estimated to reduce UK GDP by around 1-1.6%… due to reduced labour supply. This will particularly impact sectors which are heavily dependent on low-skilled migrant workers at present, such as agriculture, food and accommodation services." [Emphasis added]

So even according to the report Farage was citing, EU migration brings a net economic benefit to the UK. I've pointed out this discrepancy between what Farage said and what the report says to Ukip. If they can provide a different report, which does say what Farage says it did, then I'll update this blog accordingly. But that'll be easier said than done, because the overwhelming majority of the academic evidence agrees with the PwC report: EU migrants are net contributors to the economy.

This extremely literate and knowledgeable audience duffed up Farage very effectively. One man from the pharmaceutical industry told the Ukip leader the firm he worked for would move its headquarters from London if the UK left the EU.

The man stopped him. "I’m sorry to interrupt you there. Some operations can only be done in the EU. I can't do my job in Switzerland. I can't review certain EU products. You have to be in the EU. And that's why they have EU headquarters in the EU."

What was Farage's response to the fact that someone with experience of what he was talking about had just disproved his argument? He started jabbering on about alternative medicine. "I have to say I’m not really happy with the way much of the pharmaceutical industry has behaved," he said. "In particular I see their lobbying in Brussels. And I see the way they are very good at putting out of business people who produce alternative medicines."

Farage truly became unstuck when he got dragged onto the subject of his own comments on immigration. Here we saw the full portfolio of his character defects. He became emotional, angry, entitled and condescending and frantically tried to avoid answering the questions being put to him. He repeatedly cited a vague kind of Remain conspiracy acting against him, even though he was being asked about his own words.

One woman asked him about the danger of increased racial tension in the UK due to his comments on immigration. "You use scare mongering and inflammatory comments in your campaign which have gone against people who look non-white," she told him. The audience applauded and you could see Farage become noticeably more angry.

She interrupted. "I don’t think that – the majority of people who look black British or non-white have those concerns. They're very real concerns. And you're dismissing them."

"Well lots of them voted for my party at the last election."

"Did they? Did they? Can I see the evidence? On what numbers?"

And then Farage just lost his cool. "You’re not listening to me are you? I can't do a lot, unless I'm allowed to talk."

No-one was impressed by this little tantrum. He looked to the host, Julie Etchingham, to intervene. She wasn't having any of it. "She's put a very clear question to you," she said simply.

"Once again this attempt to demonise the Leave campaign or me…" Farage answered.

But no-one took him apart like the young woman who asked about his comments on British women being subject to sexual assault from migrants if the borders remain open (00:11:11 in the video above). Whoever she was, Newsnight should hire her immediately. She broke this professional politician using reason and a bemused smile.

It's tough to be confident in these scenarios. There are TV cameras everywhere, you know you're on air, these are practiced, famous political figures. To stay calm is challenging. But she didn't waver at all.

when a guy tells you to "calm down" cause you're smarter than him & he doesnt know what else to say #ITVEURef pic.twitter.com/4PnBiQyJCz

"How can you have the audacity to use such blatant scaremongering tactics for the Leave campaign?" she started. "In light of recent horrific sexual assaults in Germany, you have basically suggested that a vote to remain is a vote for women to be subjected to the same horrific assaults."

Farage's first response was, genuinely: "Just calm down there a little bit."

It was an astonishing thing to say. It came across as – and probably was – deeply sexist and patronising.

Even the host joined in. "She asked it perfectly calmly," she said.

Farage then launched into one of the most patronising explanations I can remember seeing from a political leader. If mansplaining exists then this was the textbook definition.

"Sometimes in life what it says at the top of a newspaper page and what you've actually said can be totally different things," Farage said. "I'm used to being demonised because I'm taking on the establishment."

"Just let me finish. When I first suggested we should have an Australian-style points system you'd have thought I'd said something dreadful and now I'm pleased to say lots of people are saying it."

Farage then started banging on about Merkel. "You’re targeting a certain group of people and using them as bait to prey upon British people's rational fears about mass migration," the audience member said.

Farage answered: "I'm sorry, this is an issue for the future. It is a tiddly little issue as far as I'm concerned in this election campaign. But I knew at some point in this campaign the Remainers would come for me and would try to conflate something I said out of all proportion."

It's a fascinating exchange, because it reveals many of the techniques Farage uses to avoid answering questions. He patronises the questioner, cites imaginary conspiracy theories against him and then frantically tries to avoid the substance of the query.

But what's best about this moment is the woman's face. She's got him and she knows she's got him. It was a hugely satisfying moment which showed just how inept Farage is at handling anyone but his core support.

This is the real Farage: inventing reports, avoiding the arguments, obsessed with imaginary conspiracy theories and patronising young people and women. ITV's audience did a much better job of holding him to account than Cameron ever could.