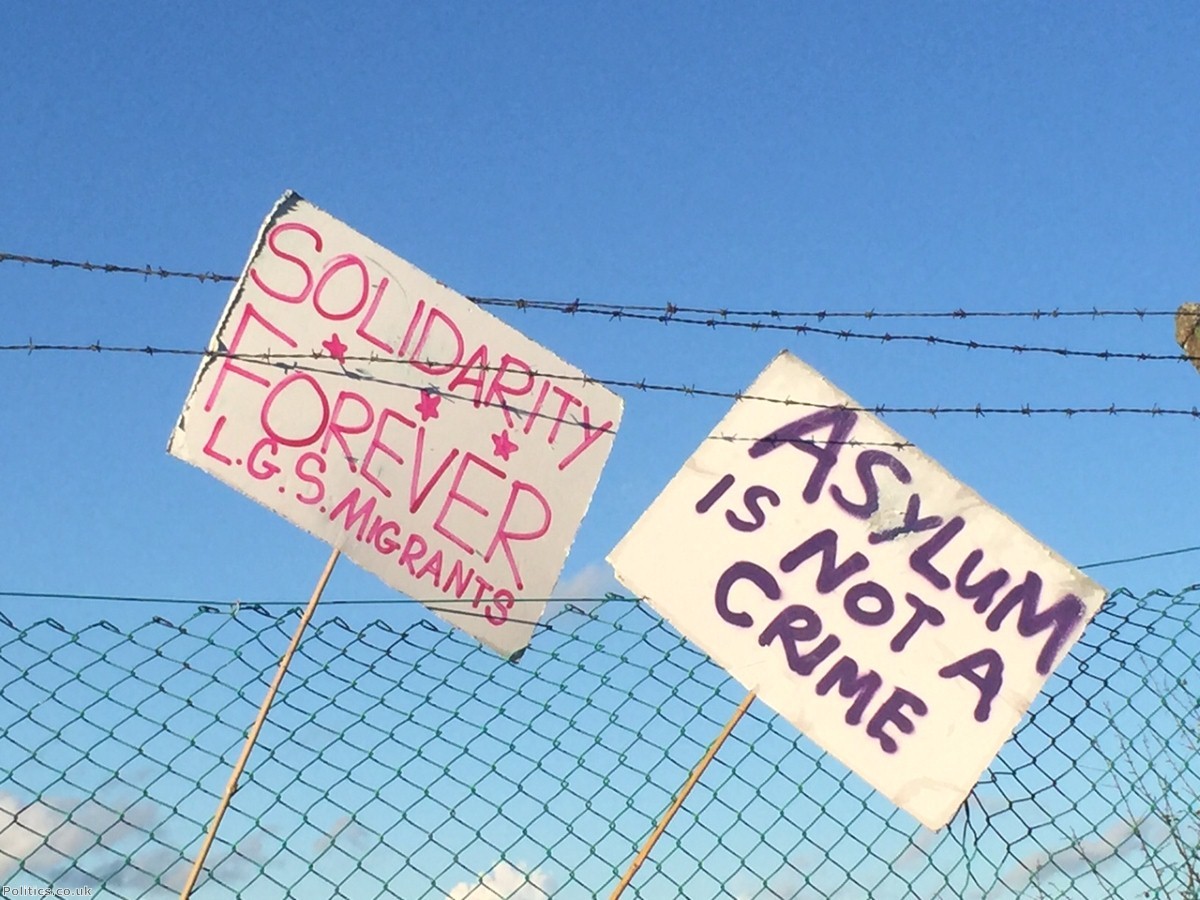 As the rain lashed down over Bedfordshire on Saturday, hundreds of people traipsed through muddy fields to protest against Yarl's Wood detention centre. Refugees, women's groups, elderly people with walking sticks, young activists, and mothers pushing prams joined the demonstration to call for the centre to be closed.

Emotions were running high. Some of those protesting had experienced detention themselves or knew people who had. Many were kicking the metal fences that surround the building, as they chanted 'no human is illegal' over and over again. Two people threw chain ladders over the fence and climbed up to hang a large banner across the top. There was a lot of anger and upset but never any real sense there would be trouble.

This isn't the first protest at Yarl's Wood. In fact there have been several this year alone. The now notorious detention centre has been the focus of damning reports and shocking claims from whistleblowers and detainees. But despite the controversy, it remains open.

Will the protesters' demands to 'shut it down', as they repeatedly shouted on Saturday, be successful? Probably not, but in a way that's not the point. For the few hours that people sang, banged drums, carried banners, and shouted, the women inside knew somebody cared about what was happening to them.

Once the rain eased off and the sun broke through the clouds, the women's hands that were reaching out of the windows from inside the centre became more visible. Some threw tissues, others held up signs with freedom written on them, many just held out their hands – as if desperate to connect with those outside.

When we talk about the right to protest it's often in connection with the importance of having our voice heard or being able to force change. Both are essential but equally important is the sense of solidarity it brings those affected by the issues .

"This is beautiful," one of the protesters said to me as she looked around at the people shouting messages of support up to the women inside. "In my country, protesting like this can leave you dead or in prison. It means so much to me to see these people out here. I know I could end up in a centre like this one day."

She is from Uganda and was unknowingly filmed as she took part in a demonstration against a high profile preacher there. Because of this simple act her life is in danger and she is now attempting to claim asylum in the UK.

Protesters have come in for a lot of criticism recently. From the spitters at the Conservative party conference to the activists who smashed the windows of the Cereal Cafe in London, there is a narrative in the press that those who take to the streets are thugs who shouldn't be listened to. But this ignores not only the many peaceful protesters but also those who gain comfort from seeing people stand up for them.

Whether it's immigration status, redundancy, benefit cuts, homelessness, domestic violence, or one of the many other things people campaign about, there can often be a sense of isolation which comes with being in such a vulnerable position. When life is hard  – and hard specifically for reasons out of your control – coming together with people affected by a similar issue, or knowing that someone cares enough to protest about it, can bring strength and the will to keep fighting.

As the protest at Yarl's Wood drew to an end, the crowd shouted up to the detainees that they would be back again. The organisers of the demonstration, Movement for Justice, later tweeted a message from the women inside. It read: "Hi guys on behalf all women in YW thanku so very much, we apreciate what u are doing for us. We love u all, thank u"

Protests take place all the time. A few of those will make the headlines. Most won't. Many will never achieve what they aim to. But success can be measured in many ways and if they remind vulnerable people they're not alone, that is certainly a victory.