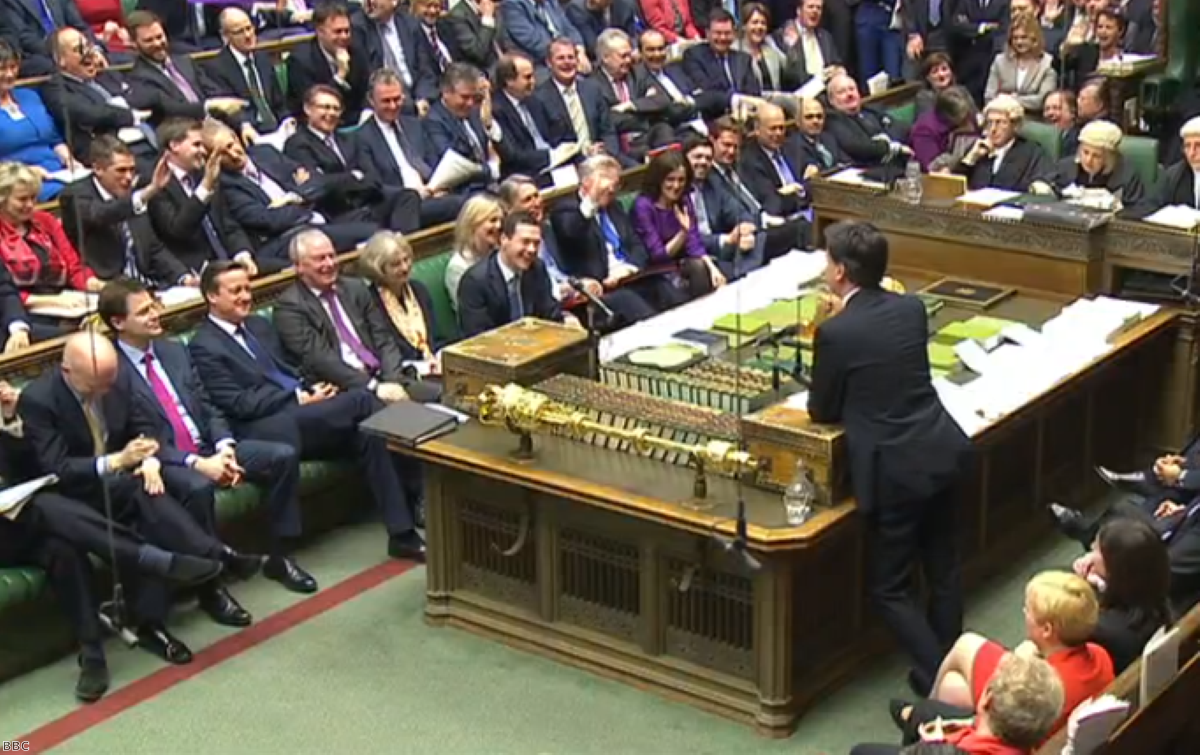 PMQS Verdict: Miliband goes out with a whimper

Across the country church bells rang out, workers downed tools and children weeped silently into their pack lunches.

Yes it was the final prime minister's questions of this Parliament and possibly the last time Ed Miliband and David Cameron will ever meet across the despatch box. Truly it was a sad and momentous occasion. Truly the world would never be the same again.

In truth, the exchanges between the two men have never been stellar. Miliband, although occasionally successful, has never really mastered the format. Cameron meanwhile has demonstrated increasing levels of contempt for the very concept of having to answer questions once a week.

Cameron's long-standing reluctance to answer questions, meant that it was with some confidence that Miliband today asked him to give a straight answer to the question of whether the Conservatives planned to raise VAT.

"On Monday the prime minister announced his retirement plans and he said it was because he believed in giving straight answers to straight questions," Miliband began with a smile.

"After five years of prime minister's questions that was music to my ears Mr. Speaker. So here's a straight question: Will he now rule out a rise to VAT."

Any other week, Miliband could have bet his family home on Cameron replying with comments about Labour's record on the NHS in Wales, warnings about Alex Salmond's influence over Labour, or jokes about Ed Miliband's kitchens.

However, today was going to be different. Today Cameron planned to actually answer the question he had been asked.

"In 43 days time I plan to arrange his retirement Mr. Speaker. But he's right. Straight answers deserve straight questions and the answer is yes," he replied.

Cameron returned to his seat looking smugger than he has ever looked before in the Commons.  The prime minister had carefully laid Miliband a trap and the Labour leader had carelessly wandered into it.

For a moment Miliband visibly stalled, as if a snare was gripping him around the ankles.

He was almost begging the prime minister now.

It was like the last whirring of a drowned robot. Behind Cameron, Tory MPs began waving Miliband goodbye. There were still 25 minutes of the session left to go, but for all intents and purposes the game was already over.

Comfortable in his victory, Cameron returned to his usual tactic of ignoring all the questions Miliband asked him. Having ruled out raising VAT in the next Parliament, Cameron now wanted to know whether Miliband would rule out rises to national insurance.

Normally this tactic of answering questions with further questions is highly annoying to watch, but today it just seemed cruel. Time after time, Cameron asked Miliband to rule out a rise and time after time Miliband declined. By the time the Labour leader had asked his final question, he seemed completely broken.

In just a matter of weeks, Ed Miliband will either become Britain's next prime minister or Britain's latest failed opposition leader.

If it's the former, then today's exchange will be long forgotten. If it's the latter, then it will be a sorry end to his time in the job.