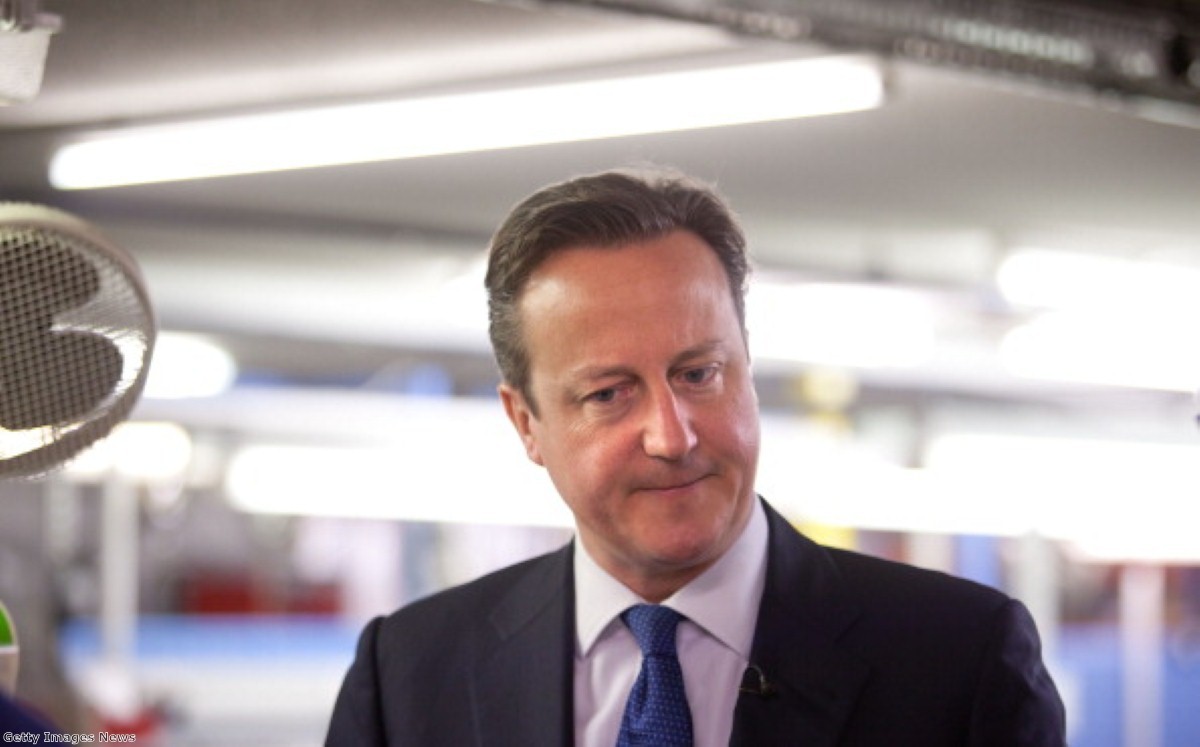 You wouldn't guess it from the current feeding frenzy over Ed Miliband's leadership, but Cameron's dreams of governing alone in 2015 are more distant than they have ever been before.

According to the Betfair betting exchange, Cameron's chances of winning an overall majority in 2015 have plunged to just 14.3%. This is their lowest ever level.

Tory chances of an overall majority at GE2015 fall to a new low, a 14.3% chance, on the Betfair exchange pic.twitter.com/v2PkIlFbd1

Cameron's supporters in the press may believe he is heading for victory, but among those who put their money where their mouth is, confidence in the prime minister has sunk to an all-time low.

There are three central reasons why David Cameron's party faces an even bigger crisis than Labour.

1. Labour's collapse is not helping them

Labour has dropped around ten points in the polls from its high point. However, almost none of this drop in support has benefited the Conservatives. In fact the Tories' vote share has barely changed at all since its collapse following Osborne's budget in 2012. Cameron's election strategy has been to hope that an economic recovery would lead to Labour voters switching over their support. This simply hasn't happened.

Even Labour's collapse in Scotland has failed to benefit the Tories. While it obviously reduces Labour's chances of an overall majority (now just 23.2% according to Betfair) it leaves Cameron's chances of a majority basically unchanged

2. Ukip's surge is hurting them

Cameron's EU referendum pledge and his party's subsequent lurch to the right on issues like immigration and welfare was designed to kill off the Ukip threat. The precise opposite has happened. Since Cameron first made his referendum pledge, support for Nigel Farage's party has roughly doubled.

That surge is likely to swell even further if Mark Reckless wins the upcoming Rochester by-election. While this surge will undoubtedly hurt the Labour party, it is likely to hurt the Tories far more. As several other recent by-elections have shown, while Ukip's surge costs Labour votes, it costs the Tories seats. Every seat that Cameron loses due to Ukip is one step further away from reaching that elusive overall majority.

3. The era of majority rule is over

The public are more divided than ever. In 1951, 97% of the electorate voted for one of the two main political parties. By 2010 that figure had dropped to just 65%. If current polls are accurate then 2015 will see that number drop even further.

The decline and fall of the two main parties in British politics (via the Telegraph). pic.twitter.com/LLEVhLbFSL

This huge collapse in support for the two parties goes well beyond any of the current trivial problems being experienced by Ed Miliband or David Cameron. It is a deep and fundamental historical shift that is being missed by almost all of the commentary on the upcoming general election.

This shift makes it increasingly less likely that Labour will win an overall majority in 2015. But if Labour's chances of securing that majority are fading, then the Tories' chances have all but disappeared. Recent polling of key marginal seats by Lord Ashcroft found that Cameron's party can afford to lose no more than 21 seats to Labour in order to remain the largest party in parliament. Ashcroft found them them behind in 38.

Cameron's dreams of victory are by no means over. If Labour continue to fight among themselves and the Tories hold their nerves then it is possible to see Labour's vote collapsing to the point where the Tories win by default. Unfortunately for Cameron, life is unlikely to be that simple. As yesterday's Tory revolt on the European arrest warrant showed, Cameron's party remains in a state of prolonged self-harm. A Ukip victory in Rochester will make that problem far worse.

But just like Labour's recent wobble, Cameron's European battles are basically problems of party management. The real crisis facing his party is far more fundamental and long-term. The Conservatives have not won an overall majority for over twenty years. Cameron was chosen as party leader on a promise to change all of that.

Almost ten years after he first got the job, his chances of delivering on that promise now look more distant than ever.