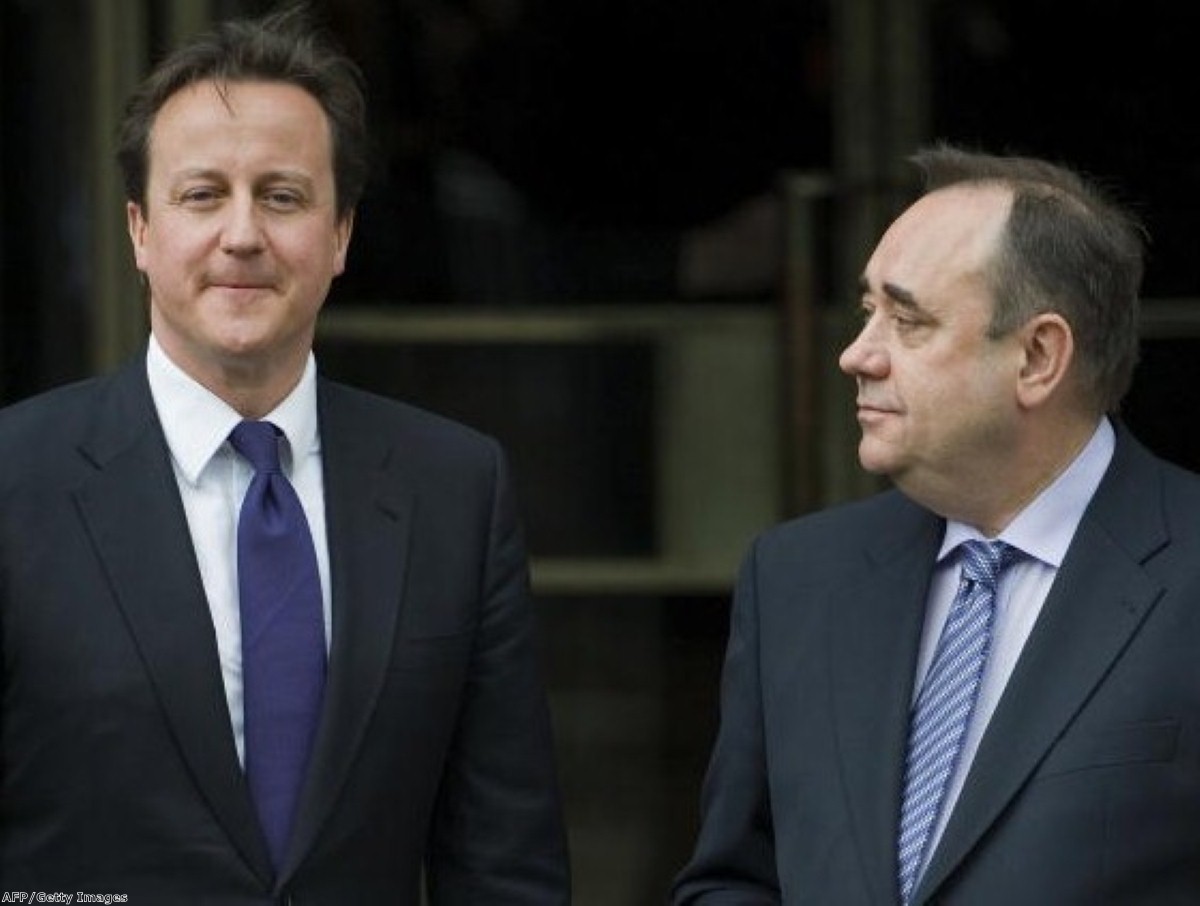 Fear of the unknown is motivating independence referendum manoeuvres

Referendums are supposed to be a simple test of public opinion.

But as the AV referendum showed, the politics of a single question is not at all about the merits of the actual argument.

Now, many months before the Scottish independence referendum, we are seeing the first use of politicians using means other than their debating powers to get their way.

Politicians can try to win referendums by winning the argument, but it's much easier for them to switch the rules. That is undoubtedly what is happening to the Scottish independence referendum. The three mainstream Westminster parties are using the supremacy of their parliament to undermine the SNP's chances of winning. They fear that, if the SNP frame the terms of the referendum, they might actually lose.

Cameron is being deadly serious when he accuses Alex Salmond of trying to achieve independence by stealth. The SNP leader has already used this approach effectively, after all. As a result of last year's election campaign fought on broader Scottish issues, not the issue of independence on its own terms, Salmond and the SNP succeeded in winning an overall majority in Holyrood which will enable the referendum to take place.

Could Salmond use the same approach when confronting the issue directly? Possibly. A three-way vote, including a potentially more appealing extreme form of financial devolution, would be possible. Certainly it could be delayed until 2014, the 700th anniversary of the Battle of Bannockburn.

But there is more to his gradualist approach than just these two points. All the Scottish government is empowered to hold would be a referendum asking Holyrood to negotiate with London on the issue of independence. The nationalists could argue that they were not seeking independence – only permission to see what could be agreed with Whitehall.

This is fundamentally ambiguous, creating uncertainties which both sides of the argument would seek to avoid. The Scots could insist they have a mandate for full independence. The English could block their demands by refusing to budge.

Who would win in this scenario? It's far from clear whether post-referendum defiance to the Scottish 'separatists', as they should perhaps be called, would succeed in political terms.

Would the public view the referendum as morally binding? We don't know. Clearly, Cameron has calculated he has more to lose from this indecisive scenario than Salmond. So he is moving the goalposts as a result.

Today we have learned that Cameron and George Osborne, who is heading the government's sub-committee looking at the referendum, calculate that they are more likely to win if the vote takes place sooner, and only features a 'yes' and a 'no' option. So they are proposing to legislate on the referendum, and by so doing dictate its terms.

The SNP is understandably furious. Their chances of winning have been significantly diminished. They are being denied the opportunity to win on their own terms by London.

But there may be a ray of hope. It is not yet clear whether the UK government is, actually, within its rights. As Robert Hazell of UCL's Constitution Unit explained on the Today programme this morning: "It is a big gamble. I think the UK government has right on its side in insisting that any referendum is fair and legal… whether the government's right to itself set the timing for what is an SNP government policy, and insist it is decisive, there they may be overreaching themselves."

This holds its own ambiguity. For we don't yet know whether the latest moves being plotted in the Cabinet will succeed. As Stewart Hosie, the SNP's chief whip in Westminster tweeted earlier: "Interesting number of tweets saying Cameron's intervention has made it more likely they will vote FOR Independence."

The perception of meddling is damaging to politics and politicians. It could prove counter-productive.

But my sense is the coalition will use the flexibility of our constitution, and the lack of precedent here, to get their way. Whether the move pays off remains to be seen. It is a big gamble which, as lecturer Matthew Ashton has written for us, could end up defining Cameron's premiership.