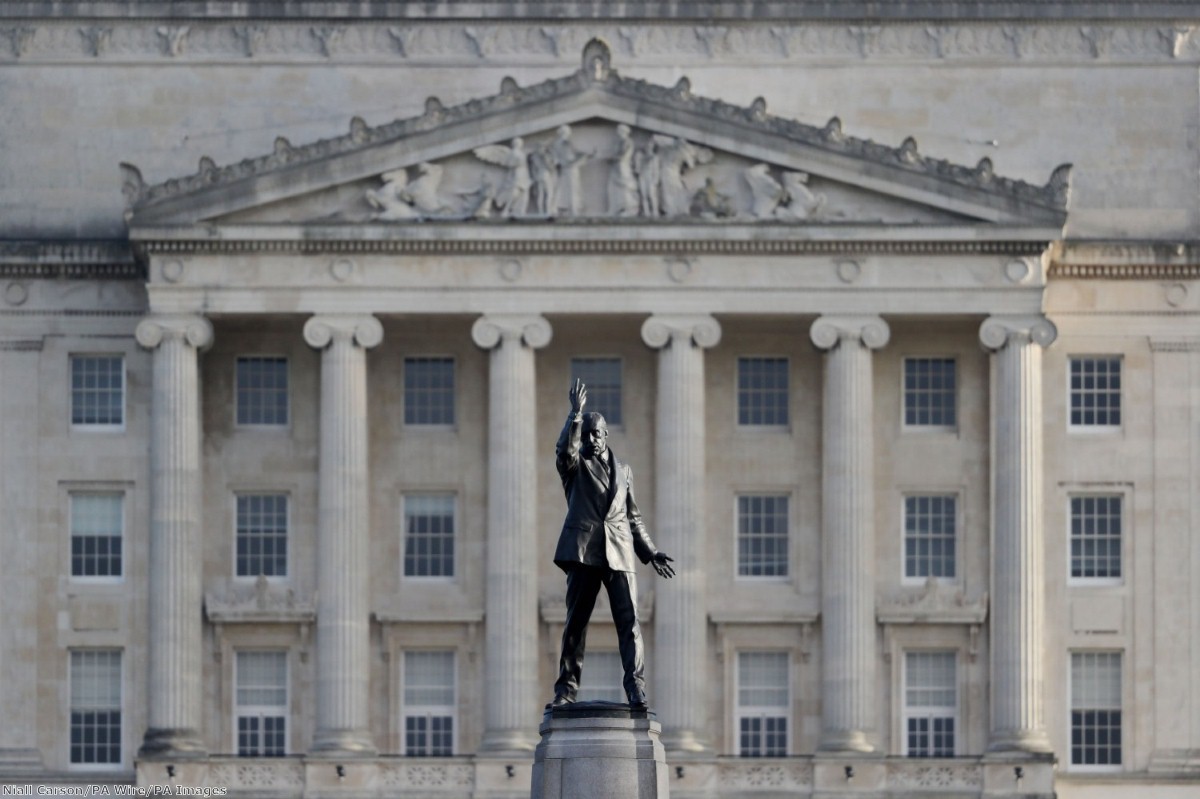 There was a telling exchange in the House of Commons recently. The Democratic Unionists' Nigel Dodds blamed Sinn Fein's call for a border poll for "uncertainty and division" in Northern Ireland. But it was Theresa May’s response and the manner in which she delivered it that was revealing. Tentative, hesitant even, she agreed that it was not right to have a referendum "at this stage".

There was no hearty commitment to the Union. No flourish thanking Dodds for his remarks, confirming how she cherishes Northern Ireland among our family of nations. No attempt at something perfunctory, even if just to butter-up the DUP and its eight crucial Westminster votes.

All Dodds received was a homily about the importance of "bringing the parties together" to restore power-sharing.

In response to question from @NigelDoddsDUP the PM rejects calls for a border poll in Northern Ireland. pic.twitter.com/shD5dwhiIF

A perfect storm of interconnected issues is gathering: Brexit. The possibility of Scottish independence. Population change in Northern Ireland itself. All this is heaped over decades of British indifference about the place. It is a matter of when, not if, Northern Ireland leaves the Union.

We already do our best to pretend it doesn't exist. Team GB is the name given to our home Olympians. But it's the United Kingdom of Great Britain and Northern Ireland. Team GB&NI doesn't have the same ring, I guess. But all this is now starting to matter.

The pace of change in Northern Ireland is quickening. The implications of Brexit are already showing-up all its grisly flaws. The £600 million the province will lose when we quit the EU is bad enough. Never mind the existential drama about future border arrangements between Northern and Southern Ireland, one of those esoteric issues that is managing to outfox Whitehall's best brains.

It is simply no longer tenable for Westminster to maintain a self-denying ordinance about what all this now means. British parties need a policy on Northern Ireland's long-term future.

Northern Ireland doesn't have one. The recent assembly elections and the decline of the unionist vote serve to remind us that population change will deliver a majority for Irish unity in a few years' time anyway.

Sinn Fein was 1,100 votes off beating the Democratic Unionists into second place. When you add up the votes for parties supporting the Union and those who want a united Ireland, the gap was just 37,000 votes.

The last census showed 45% of the population is now Catholic (and, given the symbiotic connection with political allegiance, nationalist). Catholic children outnumber Protestants at every level of the education system. This is a waiting game.

Northern Ireland was, notoriously, created as a Protestant-Unionist fief. Discrimination against Catholic-Nationalists was hard-wired into the settlement. Borders were gerrymandered to keep Unionists in control. The electoral franchise for local elections was contingent on property and business ownership. Poorer Catholics were second-class citizens.

Then the civil rights movement sprung up, demanding equality and fair treatment. They were literally beaten off the streets by the Royal Ulster Constabulary and their notorious reservists, the so-called 'B-Specials'.

The really unlucky ones were shot dead by the paras on 'Bloody Sunday'.

Then came the Troubles, that terrible euphemism for a secessionist guerrilla war between armed republicans, the British state and its loyalist lackeys.

So much British decency was squandered in the process.

We let 'securocrats' and the post-colonial military run rampant. Assassinations. Water-boarding. Indiscriminate killings. Collusion with loyalist death gangs. We went off a cliff edge in terms of what a democratic state should ever be allowed to do and keep the description.

That's why there will never be a reconciliation process in Northern Ireland. Britain's legacy is too black-hearted. The truth seeps out in long-forgotten official documents, or through the myriad of smaller enquiries that have taken place. It serves to eviscerate our sense of ourselves as a nation that upholds the rule of law and fair play.

So for the past two decades, British politicians have been mightily relieved to mouth platitudes about supporting the Good Friday Agreement, wallowing in the sheer relief that the bombings have stopped.

But that same agreement ensured Northern Ireland's very existence is time-limited. It placed Northern Ireland in an ante-chamber. Once there is majority support for Irish reunification, then the British government will facilitate that desire.

In reality, it has been government policy for much longer. As far back as 1989 when Margaret Thatcher's Northern Ireland secretary, Peter Brooke, proclaimed that Britain had no "selfish strategic or economic interest" in Northern Ireland.

What are unionists supposed to make of this? Britain is just marking time until that 51% of voters who want a united Ireland resolves the problem for us.  It is simply not fair to leave them unprepared for this eventuality. It is a shaming abdication of political leadership.

The question of Irish reunification has become too big to ignore any longer. It is time for Westminster to be honest with unionists.

We might be prepared to die in a ditch keeping Scotland, but MPs will not be changing their holiday plans to trudge the highways and byways of North Antrim of South Armagh making the case for Northern Ireland to remain. There will be an audible sigh of relief when it is gone.

Moreover, Irish reunification is now on the table as a realistic scenario for the first time since partition. It is now an evidence-based proposition, not an emotional spasm. A major international study shows the clear economic benefits of unity. The Irish media is currently abuzz with commentary about the question of reunification. The main Irish opposition party, Fianna Fail, is even preparing a white paper on the mechanics of achieving it.

This debate is taking place. We cannot let our peculiarly British hypocrisy continue.

We're just not that into Northern Ireland. Perhaps it's time we said so.

Kevin Meagher was special adviser to former Labour Northern Ireland secretary, Shaun Woodward. He is author of A United Ireland: Why unification is inevitable and how it will come about published by Biteback