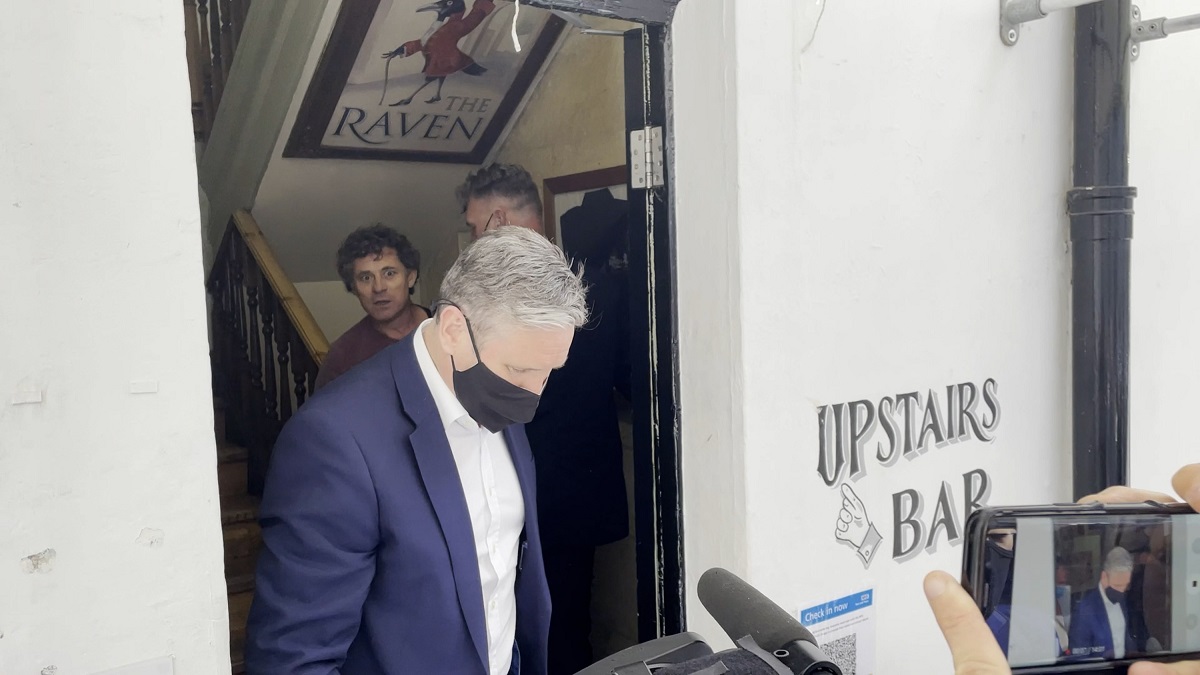 Week in Review: Starmer’s critics are losing all contact with reality

Another week, another bout of lazy sniping at Keir Starmer. Seemingly everyone enjoys this activity – Socialists, Remainers, Leavers, Tories. It’s become the easiest refrain in modern politics – Oh, isn’t Labour useless? The leader has no charisma. The front bench is invisible. They have no convictions. They just support the government/shout from the sidelines.  And next month there’ll likely be some disappointing election results to prove it.

While he was out campaigning in Bath this week, the Labour leader was accosted by a raging anti-lockdown type. He listened to him respectfully, explained why he disagreed, and then went into his pub, where the man flew into a rage. Starmer’s minder held him back while the Labour leader walked off.

The response was predictable and quite revealing. A barrage of mockery at what had been a fairly standard bit of meet-the-public peril, and which Starmer handled pretty well. Socialist accounts online worked themselves up into a spasm of baffled indignation at the fact Starmer’s bodyguard physically protected the leader of the opposition from a potential threat.

Meanwhile, the Tory attack rumbles on. An extraordinarily muddle-headed piece in the Mail this week by Stephen Glover effectively conceded that Boris Johnson does not have “honesty and integrity” and then disparaged Starmer because honesty was his “chief, perhaps only, political virtue”. The Sun, meanwhile, insisted Johnson “massacred” Starmer at PMQs – a conclusion no fair-minded observer could possibly have reached.

Amid that cacophony of criticism, there will be legitimate points. Starmer can afford to show a bit more conviction, even where it is not immediately electorally popular, on the basis of justice and the national interest. His team should probably be doing better checks on where he’s going on a walkabout. He could use some acting and voice coaching lessons. The messaging at the moment is sometimes hard to discern.

But most of what we see addressed to Starmer isn’t fair-minded or measured. It’s a cry-baby emotional response to not getting exactly what we want.

The last election saw the government win an 80 seat majority – the kind of victory that is very rarely overturned in one term. It was done by using a culture war narrative to split Labour’s electoral support between former industrial heartlands and liberal metropolitan areas.

Starmer cannot speak for one of those groups exclusively or he will lose the other, and he needs to try and avoid only saying things that upset neither of them, or he’ll come across as tepid and artificial. What’s required is a unifying narrative. His team seems to have settled on progressive patriotism, with a commitment to addressing inequality, and a focus on competence and anti-corruption. Is it the most imaginative and inspirational thing you’ve ever heard? No. Is it a decent first go? Yes. It makes sense.

This situation would have been hard enough for Starmer anyway. The pandemic made it harder – handing Johnson a daily pulpit and making it more difficult than usual for a leader of the opposition to earn a hearing.

All of this is well rehearsed. We know these arguments. And yet we get bored of them. We want to wish them away. And it’s so much easier to just say ‘Starmer is useless’ than it is to recognise that he cannot say all the things people might want to hear. It’s easier than recognising that voters who just changed the habit of a lifetime and backed the Tories aren’t going to want to feel they were wrong so soon after doing so, or that people in a pandemic actually want the government to do well, because it makes them feel safer.

At some point Starmer’s critics are going to have to answer two questions: who would do better, and how? At the moment, there is a deafening silence on those questions. Until we hear something meaningful, it’s hard to take the criticism seriously.

Oddly enough, there are some reasons to be more optimistic. They start with accepting the fact that the pandemic helped Johnson rather than harmed him. If nothing else, it gave him a purpose. But soon enough – touch wood – it will be over. Critics of the prime minister are horrified that the next election will not be decided on his failures during the emergency. But it also will not be decided on the success of the vaccine roll-out, which will be a distant memory.

What will Johnson’s purpose be once it’s over? Not Brexit. Not covid. Levelling up? This is a buzzword without any intention to fulfil it or any of the kind of long-term thinking required to discharge it. Will Johnson be able to show Red Wall voters their lives are better in a few years time? Not likely.

More likely is that Johnson degenerates into an aimless mess, without any real idea of why he wanted the position he’s in anyway. More sleaze stories will keep drip-feeding into the press. The economic damage from covid will still be felt. Johnson is the good-times prime minister and it’s not clear that the times will be good.

There are also long-term reasons to be less gloomy about Labour’s fortunes. The under-discussed ‘blue wall’ – in reality a sprinkling of suburban spots where younger families with more liberal views are moving – provides a weakness in the Tory defence. As the political analyst Steve Akehurst wrote, they could offer Starmer another 26 seats on a good day. Combine that with a non-aggression pact with the Lib Dems, lost Tory seats in Scotland and a modest improvement in the Red Wall and you can imagine Johnson getting turfed out of No.10 at the next election.

The irony is that we’ve seen in the United States what can be achieved. Joe Biden campaigned as a moderate and governs like a radical. The Republicans couldn’t use any of their traditional attacks on him, because he just didn’t seem like a crazed communist. But now he has passed a $1.9 trillion stimulus. He is revolutionising American politics. It can be done, with a bit of sense, some caution, and a decent co-operative relationship between the centre and the left which recognises that compromises must be made.

Or instead, everyone can make themselves feel better by pretending that things are simple and everything that goes wrong is Starmer’s fault.

Next month’s elections probably won’t be a pretty sight. We’re in the worst point now, close to the walloping of the last election, when the leader of the opposition struggles to be heard, and the prime minister is coasting on his vaccine rollout success. But it won’t be that way forever. There is more light on the horizon than people recognise.

The basic facts haven’t changed. And Starmer, for all his faults, is showing considerably more awareness of them than his critics.