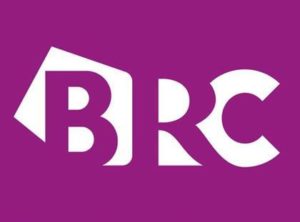 The pandemic has meant much of retail bounced between being open and closed, significantly impacting sales and changing consumer behaviours. In February 2021, non-essential retail stores were closed, pushing many consumers to buy goods online. In this context, while all comparisons are provided on a year-on-year (YoY) basis, those focused on online/in-store have also been compared with February 2020 (Yo2Y). This will be clearly signposted below.

Sales figures are not adjusted for inflation. Given that both the February SPI (BRC) and January CPI (ONS) show inflation running at historically high levels, a portion of the sales growth will reflect rising prices rather than increased volumes.

Over the three months to February, Food sales increased 0.1% on a Total basis and decreased 0.3% on a Like-for-like basis. This is below than the 12-month Total average growth of 1.7%. For the single month of February, Food was in decline year-on-year.

Over the three-months to February, Non-Food retail sales increased by 12.0% on a Total basis and by 6.9% on a Like-for-like basis. This is worse than the 12-month Total average growth of 19.4%. For the single month of February, Non-Food was in growth year-on-year.

Over the three months to February, In-Store sales of Non-Food items grew 71.2% on a Total basis and 57.2% on a Like-for-like basis. This was an improvement on the Total 12-month average growth of 61.6%.

“February saw continued sales growth, although dampened by Storm Eunice and falling consumer confidence. Traditional try-before-you-buy products, like furniture and home accessories, as well as fashion and jewellery, continued to be the highflyers as more people returned to stores. While online sales remained down on last year, the new spending habits driven by the pandemic have settled into a new normal, particularly for non-food, with four in every ten pounds now spent online compared to three in every ten before the pandemic. Retail has driven five years’ of digital transformation in 24 tumultuous months.

“The future is looking increasingly uncertain, with current demand unlikely to be sustained. Consumer confidence, falling in recent months, will likely tumble further against the backdrop of the current geopolitical events. The cost of living will continue to spiral due to global inflation, increasing energy bills and the rise in national insurance this Spring. With households facing lower disposable income, discretionary spend will be one of the first things to feel the squeeze.”

Paul Martin, UK Head of Retail | KPMG
“Retailers saw continued sales growth on the high street in February with sales up nearly 7% on last year when the UK was subject to lockdown restrictions.

“Clothing and footwear categories witnessed the highest growth, most double digits in February as restrictions were lifted and consumers re-stocked wardrobes, heading back to offices and embracing life living with Covid.

“Online sales volumes continued to fall across all categories compared to February 2021. Online penetration however remains considerably higher than pre-pandemic levels, forcing retailers to continuously focus on reengineering their business models to find the right mix between physical and online retailing.

“As we move into a new phase of managing COVID-19, retailers will be focussed on keeping consumers spending, as the cost-of-living squeeze threatens the health of the sector. With travel very much re-opened retailers are facing a double whammy of competing for share of wallet at the same time as the cost of living hits a high not seen in at least three decades. As is the case for consumers, retailers also face tough inflationary pressures and will have to make challenging decisions around how to absorb those, or pass them on without losing custom. It could be a challenging time ahead for some in the sector should consumers choose to cut their spending to manage increasing household bills.”

“Food and drink sales put in a resilient performance in February and although the market isn’t performing at the same rate as the lockdown-boosted growth of 2021, it remains elevated compared to 2020. Part of this will be down to inflation of course, which is undoubtedly playing a role, as shoppers face the fastest rise in the cost of living in 30 years.

“Against this backdrop, it’s no surprise that IGD’s Shopper Confidence Index continued its decline in February, reaching another all-time low since the index started in 2013. Anxiety among shoppers has no doubt been exacerbated by continued rising inflation, Ofgem’s confirmation that the energy price cap will increase by 54% in April and uncertainty over how Russia’s intervention in Ukraine will impact supply chains and food prices.” 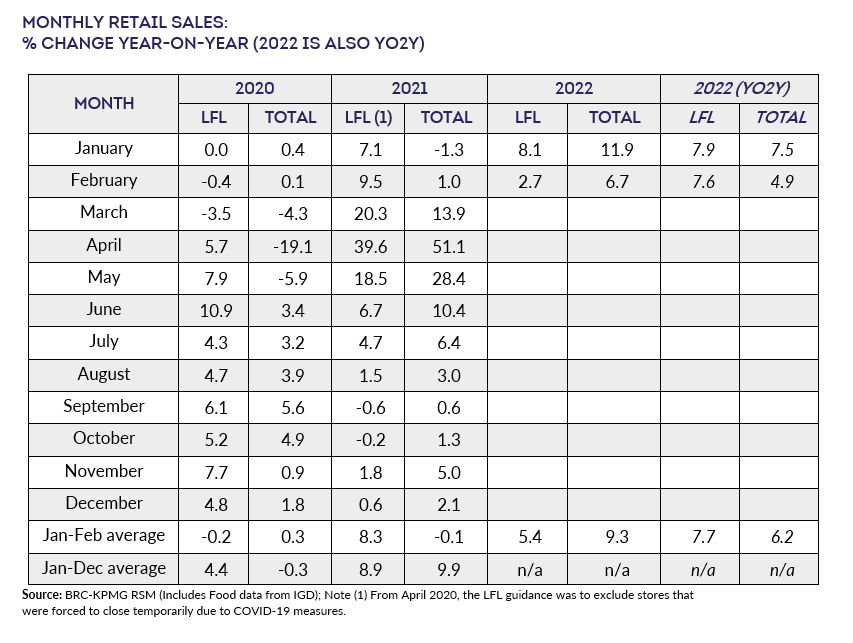 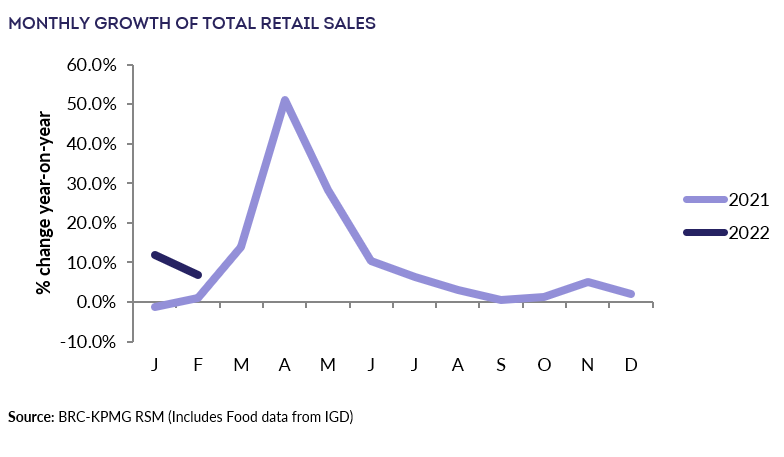 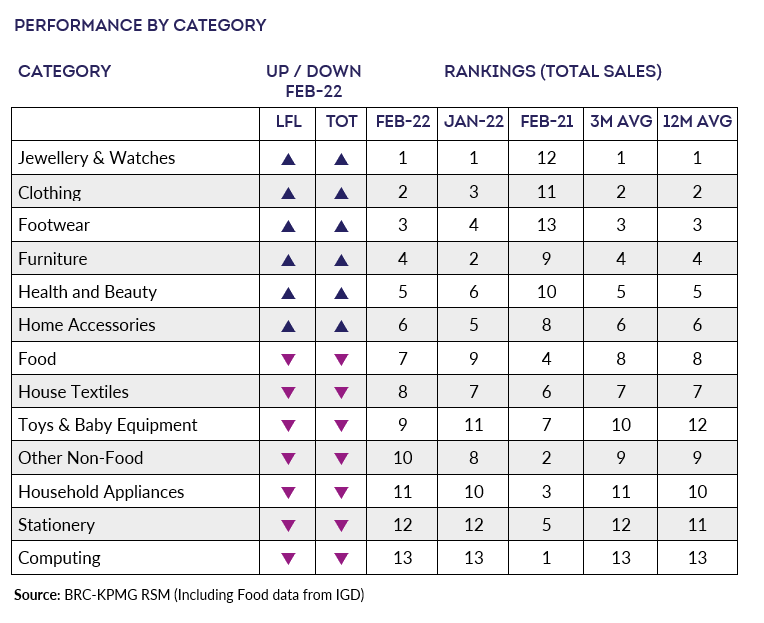 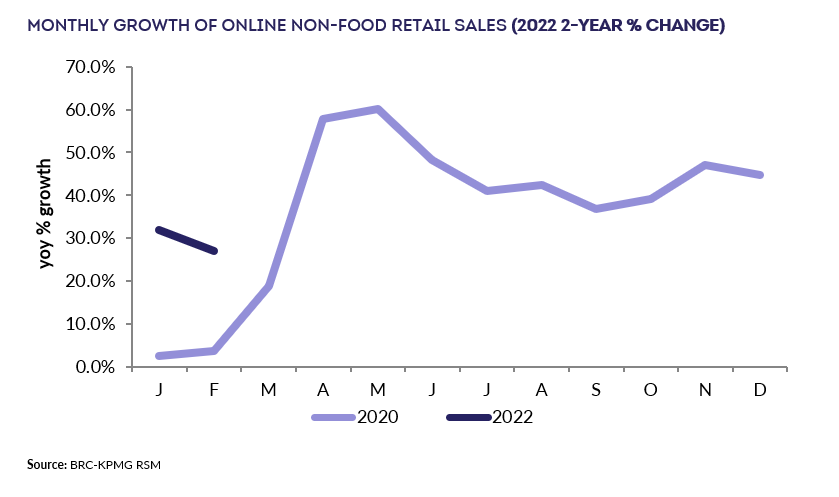 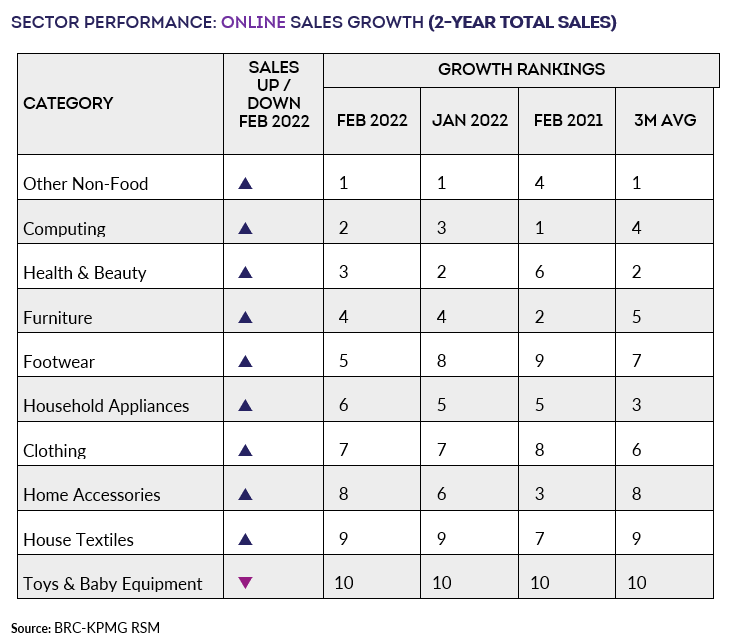 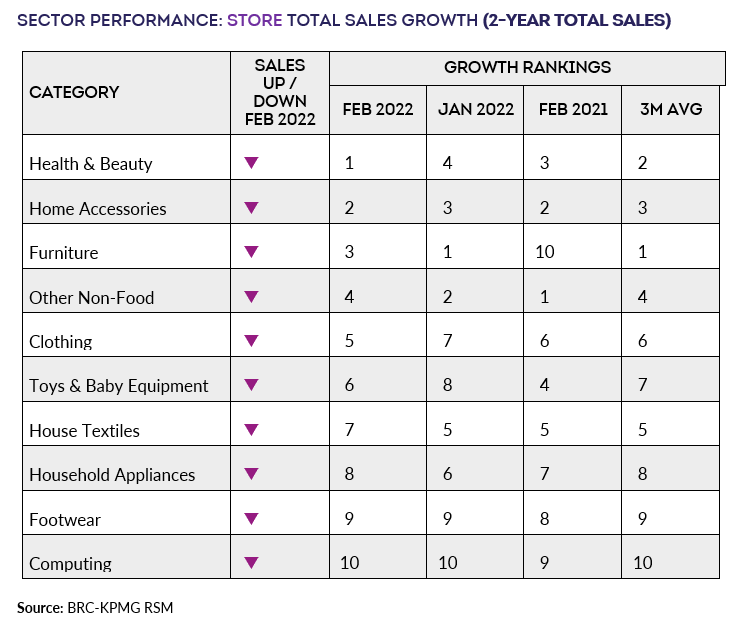 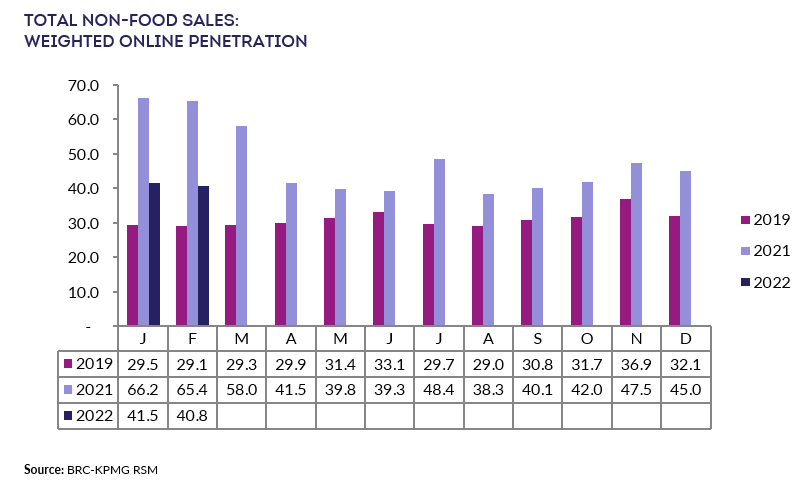